Eat, drink, and make sure the two are harmonious

When starting along the path of learning to appreciate fine wine, everyone hits the rough patches that can intimidate the most tranquil soul. And nowhere is such a bump more extreme than in a fine restaurant if you're subjected to an arrogant sommelier and/or an unwieldy wine list. While dining at Aureole in Las Vegas (a fine dining establishment renowned for its wine collection) I witnessed a young couple at an adjacent table awkwardly page through the biblical-sized wine list only to cast the tome aside in frustration and order martinis. That's just not right.

The sommelier or server, for that matter should have at least offered assistance. After all, they had time, it being the early dinner hour. And I could see them watching from the sidelines. The truth is, I can't fathom passing on wine in a restaurant as extraordinary as Aureole. Like Europeans, I believe wine is as integral to my meal as the food on my plate. Although I've been 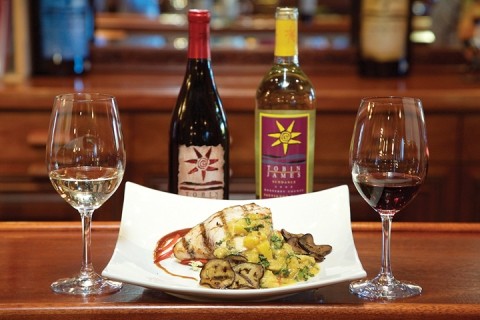 # around too long to be intimidated by affected sommeliers or giant wine lists, even I found Aureole's book a bit tedious. But it was only because I'm a wine geek who considers every possibility when selecting the appropriate wine for my meal.

I've taught several classes on food and wine pairing in conjunction with the SLO and Paso Robles vintners' associations and always pointed out that pairing wine with food isn't learned overnight. It takes years of experience to gain an instinct for pairing a complex wine with a complex dish and to know when to keep things simple. But clearly the journey's worth taking. Wine has the amazing quality of bringing out the subtle flavors in everything, whether it's a simple grilled steak or an Asian stir-fry composed of myriad ingredients. You also find that a great dish can improve the wine you're drinking.

But without help, the aforementioned couple sadly lost out on the opportunity of enjoying an unforgettable dining experience. I know Aureole's owner/chef Charlie Palmer (whom I've interviewed) would have expected more from his staff.

Even the archaic rule for pairing food and wine "white wine with fish, red wine with meat" is a better solution than missing out on a glass of fine wine to complement a good meal. Nowadays, the new rule is that there are no rules in pairing wine and food. While that sounds righteous, I question its value to the newcomer who struggles to comprehend a wine geek's preference for pairing salmon or ahi with Pinot Noir.

SLO County is no longer limited to a handful of fine restaurants. We dine in good quality French, Thai, Japanese, Latin, and Italian restaurants staffed with excellent wine lists. Admittedly, few restaurateurs here can afford to pay a certified sommelier. But thanks to Cal Poly's enology program, restaurants have wine savvy servers who can help find a good choice for the foods you like. Don't be fearful about asking for help those aspiring winemakers love an opportunity to demonstrate their knowledge. And if you let them know your price range, they're better able to suggest the best wine in that category.

Chefs are also more motivated to be creative with the array of food-friendly white varieties local winemakers are producing, like Viognier, Riesling, dry Rose, and Pinot Gris/Pinot Grigio (the latter is the grape's name in France and Italy, respectively). These wines are terrific aperitifs and when paired with something delectable to eat they're downright exciting. Of course, you can't just choose Viognier and expect it to be like those produced in Paso Robles, Edna Valley, or Santa Maria Valley appellations.

That's when an expert at pairing wine with food can provide you an enlightening experience. Owner/chef Jose Dahan at Et Voila in SLO has catered for wineries since he relocated there in 1996. The Frenchman is a wine connoisseur who knows local wines quite well after a decade of preparing winemakers' dinners. Since wines vary vintage to vintage, Dahan is provided wine samples for the featured dinner so he can analyze them and plan the meal accordingly. He recalled a recent pairing that particularly pleased him.

"My approach isn't to match but to complement food with wine, and when you come up with a combination that clicks, it's pretty wonderful," Dahan explained of preparing for a dinner at Claiborne & Churchill. While eating a handful of dried fruits that included crystallized ginger, blueberries, cranberries, and apricots he realized the combination of flavors was perfect for their Runestone Pinot Noir. "I prepared a quail salad with the dried fruit mix, tossed it in a raspberry vinaigrette, and it was as good a combination with the Pinot Noir as I've had in a long time."

The newest trend among local wineries is hiring a personal chef. Tobin James Cellars in Paso Robles recently hired Erik Copeland as its executive chef to prepare gourmet dinners for winery guests and during special events. I've promoted Copeland since he was at Schooner's Wharf in Cayucos, and he further impressed me when he said that he's cooked several times for chef Bryan Ogden, famed for his cuisine at Bradley Ogden restaurant in Caesar's Las Vegas. It's named for Ogden's father who was renowned for his Campton Place restaurant in San Francisco where I interned while studying at the California Culinary Academy in 1988. Serendipitously, Ogden invited Copeland to spend a week in his Las Vegas kitchen.

Copeland has also attended the Culinary Academy of America in Napa Valley where he learned the art of using "bridge ingredients." He explained: "When you can match food with the right seasoning it will come together with wine in ways you wouldn't imagine. It works well with fish or meat."

Bridge ingredients, he noted, are herbs, berries, citrus, and mushrooms, all of which mirror aromas and flavors that make Sauvignon Blanc, Pinot Noir, and Cabernet Sauvignon so awesome.

"I prepared scallops, which are traditionally paired with white wine, and made them a red wine dish by sauteing them in bacon fat and bridging the ingredients with a habanero/blueberry jam sauce. It paired perfectly with our 2005 Silver Syrah."

Obviously a meal planned by the winemaker and chef is the ultimate pairing, and it's a taste lesson that will improve your ability to select wine when dining out. Dahan offered this last bit of advice: "At a winemaker's dinner, I recommend saving a little of each wine served. One hour later they're totally different than they were when opened at the beginning."

Dahan instructs his servers to never clear wineglasses from tables until dinner is concluded so guests can continue to taste the wines as they develop throughout the meal.

"Tasting it later, you may find it goes well with the cheese course or dessert in a way you never expected," he said.