In August 2019, Los Osos resident Chris Mariscal sent me a long Facebook Messenger note that read in part: "Hi Glen. I'm really bad at social things, so I'm really sorry if this isn't cool to contact you here about work stuff. I was playing drums for Hot Tina most recently (I'm pretty sure I'm fired, funny story for another day), and had put out an album of solo stuff."

Long story short, he wanted to send me his solo album. "I was hoping that someone might listen then give an honest assessment, whether it's good or whether it's crap. So far for whatever reason, my teaser video I boosted on Facebook got over 100k views, so the people in Bangladesh, Pakistan, India, the Philippines, and Argentina seem to think I'm onto something."

I told him to send away, and he ended his message with this: "I'm told it came out more Gram Parsons than George Jones; hopefully no one tries to set me on fire in the desert. Well, this has certainly been an awkward stream of consciousness. I'm going to not over edit and overthink it for the next twenty minutes and instead just hit send and hope."

His album arrived, landed on my desk, and was forgotten there ... until he sent me another message on Oct. 30, 2020. "I dropped it off in person at the offices. I was wondering of you ever got that or if it was simply not up to snuff, which is cool."

I totally forgot about the record but told him the next time I was in the office—I've mostly been working from home—I'd look for it, and sure enough, after about 10 minutes of shuffling piles of CDs, voila!

Titled Trial & Error & Error, I finally got the CD in the player and gave it a spin, and it's charming and personal, and recorded completely on Apple's GarageBand program.

"Guitars and bass were direct-in with proprietary amp plug-ins. The drums, acoustic guitar, and vocals were all done with the same single Fender microphone," Mariscal explained in the note he included with the CD. "They were all arranged for a classic Buddy Holly four-piece combo. The writing, arranging, performance, recording, record label, production, mixing, mastering, artwork, photography all represent a complete solo effort."

Holy heck, man! This is an amazing solo effort. Aside from a cover of Pete Seeger's "Living in the Country," all songs were written by Mariscal, and they're often narrative gems with enigmatic lyrics sung with a plaintive voice and accompanied by Mariscal's often sparkling guitar work.

On "I Love You (So I Gotta Hate You)," he sings, "I'm at the train station. I'm about to get away from you. Not going nowhere. I just needed something to do. Just to kill a few hours. Then it's time once again to not share a sentence or a thought with a friend. Well, I begged you not to do it, so that's how it went down. I'd have done a whole lot better to have never made a sound." 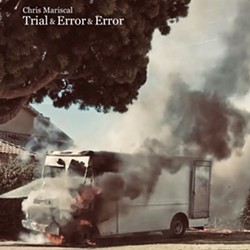 On "Hotel Rooms Hangover Mornings," he sing, "Well here I am. I'm the talk of the town. I'm that dirty little secret that you can't keep down. And they all know of your little game, and they all know but won't use my name. What you chose to do for you and what I chose to do for me is now a major something in their books of history. Hotel rooms hangover mornings running from what is, but now I'm just a story. It's one that's yours and his."

These are mostly quiet songs about working through life's travails. It's an impressive solo effort available on most platforms like Apple Music and Spotify, as well as YouTube. Definitely worth a listen.

The Cal Poly Symphony opens its virtual season on Friday, Dec. 4, with music by Gordon Jacob, George Walker, and Ludwig van Beethoven (7:30 p.m.; $5 via pacslo.org or by calling (805) 756-4849). In addition to the concert, student musicians will talk about their experiences with preparing for and presenting a concert during a pandemic, and videos from fall quarter Zoom rehearsals will be shown.

"For the first time, the Cal Poly Symphony has been rehearsing as a hybrid ensemble," conductor David Arrivée explained in press materials.

On Sunday, Dec. 6, the Cal Poly Choirs will virtually present their 4th Holiday Kaleidoscope (3 p.m.; $10 via feelitlive.com). Expect a variety of virtual choir presentations, with special guest appearances by the Valencia High School Choirs and Canzona Women's Ensemble, among others.

You know who the pandemic isn't robbing of holiday spirit? The Jingle Belles! This local trio of a cappella singers is usually the hottest holiday ticket in the county, hired to spread Christmas cheer with their gorgeous rendition of holiday classics. Stupid COVID-19 has made that impossible, but you can still hire these lovely ladies for jingle grams via Zoom and Facetime. Starting on Tuesday, Dec. 6, they're available every Tuesday from 6:30 to 9 p.m., every Thursday rom 6 to 9 p.m. (exception Dec. 23 rather than 24), and every Sunday from 4 to 8 p.m. Contact Linda Wilson at jinglebelles.SLO@gmail.com or call (805) 441-2570. The 15- and 30-minute slots will fill up fast! Δ