Every year during deer rifle season, access to the 5-mile American Canyon Trail in the Machesna Mountain Wilderness area of the Los Padres National Forest is made available to hunters and hikers, which for the rest of the year is only accessible via a four-wheel drive route. Since that time of year happens to be now, I decide to give this less-traveled trail a try, and make my way out toward Pozo on the sunny Sunday afternoon of Sept. 11.

After following the winding, scenic Pozo Road to the Pozo Saloon, I drive past the parking lot full of concertgoers, staying on Pozo Road until I get to Avenales Ranch Road and make a right. I don’t actually see a sign for Avenales Ranch Road as I turn, though that doesn’t mean there wasn’t one, but if I stayed straight it becomes Park Hill Road, so I turn right and it works out. From there I continue until I reach a sign for the American Canyon Campground and make a left. When I reach the campground, I park near the trailhead located toward the back of the site.

It’s important to note that high-clearance vehicles are recommended, as there are some dry creek crossings that need to be made, but I'm managing fine in a relatively low-clearance compact hatchback. There are also two closed but unlocked gates that need to be opened along the way, which are presumably locked for the rest of the year. 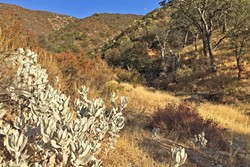 The campground is completely empty when I arrive, and there are no other cars parked at the trailhead. Perfect.

As I head into an oak woodland, the first things I see are some yellow-billed magpies in the canopy and a woodpecker chiseling away at a tree trunk. The start of the path is clear and I follow it between trees and chaparral for maybe a mile or so before it becomes difficult to discern the way through the overgrowth.

My strategy, at first, is to follow the signs left by recent equestrian activity, but after climbing around and pushing through some tangled brush, I soon realize that pursuing what may or may not be the actual trail while not riding atop a 2,000-pound beast would probably require the use of a machete, and would not make for a very enjoyable hike. I decide instead to scale a hillside for a better view and do a little exploring without losing sight of the way back, before returning to my car. 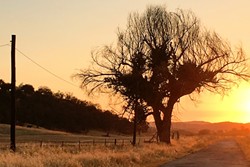 As I make my way back I hear some rustling beneath a shrub and stop to investigate. Among the dried grass and leaf litter I see the bright blue tail of what I was later able to identify as either a western or Gilbert’s skink.

Though I was only able to hike a portion of the trail, the drive there and back was an adventure in itself, and the drive back in particular yielded some pretty nice wildlife sightings, including a flock of wild turkeys, several deer, and a black bear. If you’re interested in giving this trail a try, you’ve got until Sept. 25. Bring a horse or a machete.

Calendar Editor Trever Dias will one day return to the American Canyon Trail, but for now he can be reached at tdias@newtimesslo.com.