By Karen Garcia and Caleb Wiseblood

Director Niki Caro (Whale Rider, McFarland, USA, The Zookeeper's Wife) helms this live-action remake of Disney's beloved 1998 animated film. To save her ailing father from being drafted into a war, a young woman, Hua Mulan, disguises herself as a man to fight in his place. (120 min.) 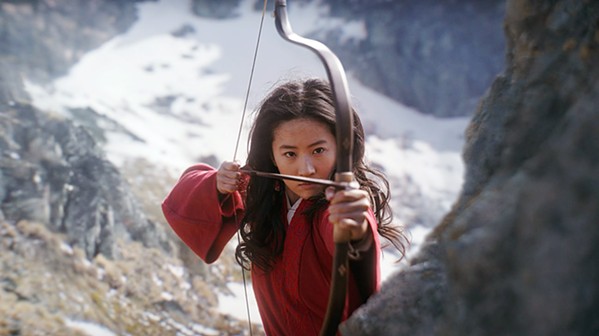 Caleb Like its animated predecessor, Mulan begins with an executive order from an unnamed emperor of China (played here by Jet Li), who decrees that one male from every household in the nation must join the Imperial Army in its fight against northern invaders. But unlike the original film, where the opposing side is an army of Huns, this remake's primary antagonist is Bori Khan (Jason Scott Lee), who leads a battalion of Rouran warriors into China and vows to murder its emperor. #TheWrathOfKhan. Besides bloodlust, another attribute the original's villain shares with Khan is a penchant for pet falcons. But Khan's falcon is more than just a falcon, 'tis rather a shapeshifting sorceress of sorts, Xianniang (Gong Li), who can jump between her animal and human form at will (think Professor McGonagall except evil). I love how the filmmakers decided to expand upon the falcon character while simultaneously omitting Mushu, the original film's primary comic relief (voiced by Eddie Murphy), in favor of a more "realistic" take on Mulan. I can picture how it all went down in the writer's room: "Nobody's gonna buy a talking dragon in live-action form. But remember how successful Birdman was? Maybe we can have our very own Birdwoman?"

Karen Xianniang is an interesting addition to a beloved Disney classic, but I feel like she was thrown into the film to do Khan's dirty work of invading villages. However Xianniang and Mulan (Yifei Liu) have something in common: They both have strength and power that is dismissed because they're females in a patriarchal world. I appreciate the sentiment, but Xianniang's side story is a bit of a stretch for me. Actually, the recent Disney live-action reboots of old films are all a stretch for me. At least most of them have the original songs in the film—I'm just bitter that I didn't get to sing along to "Reflection." I get it, this was more of a serious adaptation of the film, and on that note, the actors were also very serious, dare I say ... flat. In the original when Mulan goes to a training camp for the Imperial Army, she meets a group of men with comical personalities who become her friends, something that was sorely lacking in this go around. Who is that girl I see on my television screen staring straight back at me? Well, it's not the best reflection of the 1998 Mulan.

Caleb Ancestors, hear my plea/ Please bring my $30 back to me. Mulan isn't worth the "Premier Access" price it's currently offered at ($29.99 with a subscription to Disney Plus). But if you've already got Disney Plus, I recommend streaming Mulan a few months from now when the additional fee goes away. In the meantime, my advice is just stick to the original. I can relate to your bitterness, Karen, I also missed the songs, especially "I'll Make a Man Out of You" and "A Girl Worth Fighting For." I really wish they would have tried integrating the musical numbers into the remake. Is a character bursting into song any less believable than Xianniang's "animorph" powers? Even the warfare scenes felt more powerful and atmospheric in the animated film. Mulan's training sequences feel watered down as well. The remake implies Mulan was gifted with qi (depicted in the film as a magical energy source rather than the traditional martial arts concept it's named after), which is how she's able to fight so well. In the original film, Mulan is an ordinary woman who trains hard to become a natural badass, no magic required. I think it's clear which of the two versions is more empowering.

Karen If you don't want to take our word for it, The New York Times reported that Disney had high hopes that the $200 million film would culturally resonate with moviegoers in China, but instead it was met with complaints. The audience was reportedly troubled by the westernized character that "succumbed to Orientalist stereotypes." On par with Caleb's perspective, another issue was the fact that Mulan is turned into a hero because of her qi powers rather than finding the power of inner strength to be who she wants to be—how is that relatable? If you're looking for a film that will empower your youngsters and teens, stick to the original. This just doesn't cut it. That goes for you too, Disney, leave the classics alone. Stop being lazy, and come up with new characters and stories that can transcend generations. Personally, I'm just tired of reboots. (120 min.) Δ