In a small meeting room within San Luis Obispo City Hall, about 16 people were standing by the owners of Sidecar Cocktail Co. in support of adding an accessory distillery to its relocation plans. 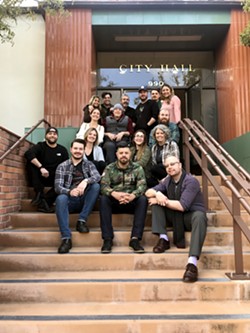 The restaurant and bar known for its craft cocktails is working on relocating from its current home on 1127 Broad St. to 1040 Broad St. At the administrative hearing on Dec. 17, Sidecar owners Josh and Jeremy Christensen proposed modifying their existing use permit to include distilling operations. The Christensen brothers said they planned on creating their own spirits, bitters, and essential oils for cooking.

"We're not going to become a huge producer like Jack Daniel's or Maker's Mark," Josh said. "We really want to focus on making a small quantity of this distilled spirits, but doing so in a way that would evoke the craft moniker, something that we make with our own hands in a very small space."

The permit was unanimously approved, putting Sidecar a step closer to renovating and relocating to their new location. The space, located next to SLO Creek, has gone through several changes of hands recently, from Creekside Brewing Company to Metro Brewing Company, which later changed its name to Underground Brewing.

"Not to talk negatively about any other business that's been in there, but the building itself is really a unique and interesting building," Jeremy said. "We're excited to go in there and accept it for what it is and make it what it should be."

The owners said they're overwhelmed with the support they've received from the community, which hasn't been just for the business but also for Josh and his family. In September, Josh was involved in a car crash on Highway 101 at the Cuesta Grade where, according to Josh's social media, his Honda Pilot collided with a semi truck, causing his car to roll over. He suffered a collapsed lung, shattered wrist, nine broken ribs, and a broken hip.

At the Dec. 17 meeting, Josh was in a wheel chair with an elevated right leg, but was in high spirits.

"We obviously have gone through a bit of a time the last couple of months. This is just rad that we get to come out of this time jumping into a new and exciting project that we've been thinking about for a really long time," he said. Δ