Distinctive, delicious Detroit-style pizza is on the rise in SLO County

Buddy's Rendezvous in Detroit was the first to whip up pizzas in square steel pans available from local automotive suppliers, according to legend. The pies featured a thick airy crust topped with Wisconsin brick cheese spread generously to the edges.

That was 75 years ago, and the pie became a local favorite, but it didn't branch beyond Michigan until about 10 years ago, when restaurateurs in other states started popularizing the term "Detroit-style."

The term went viral in 2012 when Detroit chef Shawn Randazzo won the International Pizza Expo in Las Vegas with his Detroit-style entry.

The pizza's fame peaked and waned over the next decade, then skyrocketed nationwide in 2020 as COVID-19 shutdowns temporarily relegated the restaurant industry to take-out-only establishments.

Yelp reported in its 2021 Trend Forecast that reviews touting "Detroit-style pizza" are up 52 percent. It also noted that mentions of "hot honey" for drizzling over pizza are up 48 percent, while "Nashville hot chicken" references are up 60 percent.

Not surprisingly, Detroit-style purveyors have San Luis Obispo County covered. And they're capitalizing on the honey and chicken trends as well, with the sticky syrup jazzing up pies at Benny's Pizza in SLO, while Nashville hot chicken tops the Smashville at Sweet Lew's in Paso Robles.

The two eateries feature traditional elements of Detroit pizza, with polar-opposite individuality. One limits topping choices and focuses on cheese caramelization and its flavorful red sauce; the other offers myriad fresh ingredients and build-your-own options.

Established in February 2020, Benny's has outgrown its takeout operation—a self-named commissary kitchen at 977 Foothill Blvd.—and will be relocating to the former Pepe Delgado's location at 1601 Monterey St. He will continue renting out space at Benny's Kitchen to other food providers, while launching Benny's Pizza Palace and Social Club by early November.

Arrona has amassed a local following—5,400 strong on his Facebook account—who order via social media. Pies are distributed in predetermined time slots on Tuesday and Friday evenings. The meticulous dough-making process limits Arrona's production capabilities to precise numbers, so patrons who reserve their pies ahead of time reap the rewards.

"I don't limit the number of pizzas per hour for fun," said the San Luis Obispo native, who juggles his schedule between baking, teaching, and studying. He is an adjunct professor at Cuesta College and is nearing completion of a Ph.D. in global and imperial history from Oxford University.

"The process of making Detroit-style dough is pretty unique," he explained, "and very labor-intensive."

Twice a week, Arrona pumps out approximately 100 pizzas. He double-proofs his homemade dough, which takes from four to six hours, then tops it with cubed cheese, heavily distributed from rim to rim and especially at the corners.

Next up, he says, is his secret sauce, which is "sweet on the front, and spicy on the end." Selected toppings are generously layered over the sauce, then the pies bake for 20 minutes at 500 degrees.

"You will see a beautiful caramel crust below this black burnt-looking cheese," he said. "But that cheese is the best part." 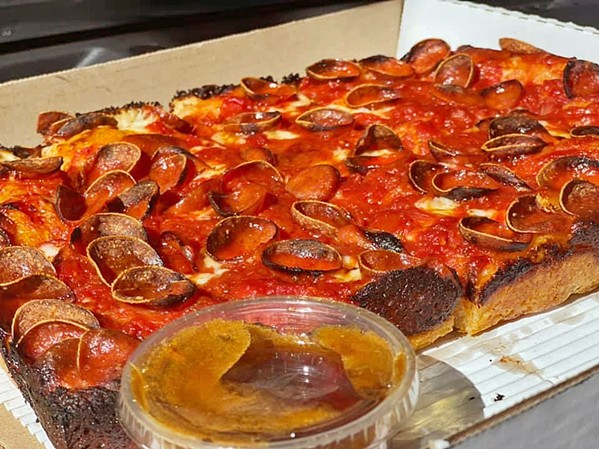 Arrona is licensing his recipes as part of his new venture, co-owned by a silent partner and Colin Wenzl, manager of McCarthy's Irish Pub in San Luis Obispo.

But the eatery and chef Andrew Lloyd push the limits of tradition with novel flavor combinations, such as vegetarian-pleaser Higher Ground, meat-packed The Big Lewbowski, and Thai Pie, a spicy mixture of chicken, serrano peppers, sesame seeds, and cilantro.

Sweet Lew's joined the Detroit-style bandwagon in September after years of experimentation. Its new dinner menu showcases the Detroit delicacies, while its lunch menu still dishes up New York-style slices and whole pies.

"We wanted to distinguish ourselves in the pizza market. Paso has a lot of pizza places, but no one to my knowledge is doing Detroit-style. Our guests are raving about these unique pies, and we have been selling out of them almost nightly," said Lewis, who also owns the Planing Mill pizzeria in Visalia.

"Once we can get through this pandemic and related labor and supply shortage, we are looking forward to getting our space going full bore with live music, wine-pairing nights, tap takeovers, and much more," Lewis added.

In SLO, Arrona's nearly 3,000-square-foot space will feature seating for up to 107 guests, an outdoor patio, and full bar. The complete menu is under development, but pizza pre-orders are expected to remain a mainstay so staff can stay on top of quality and projected quantity.

"I'm looking for things that you care about," Arrona explained. "Maybe it's your pet, or a picture of you and your dad, and your dad died. I want that at Benny's. I want you to write a message on it, so it's something special to you as a person.

"At those old-school restaurants in New York, there are celebrities on the walls, and that's cool and all ... but I want you on my wall. You're my community." Δ