Tubby Wubby sewing kits take off in SLO and beyond

Get your very own TubbyWubby at local retail locations like Whiz Kids in SLO or Sew Fun Fabrics in Atascadero. Stitchers of all ages can also join TubbyWubby's monthly subscription club, where a kit with the two newest critters will be snail mailed to you. Visit tubbywubby.com for more information. Crafters wanting a challenge can look forward to medium and large TubbyWubby kits hitting the market in January 2018. 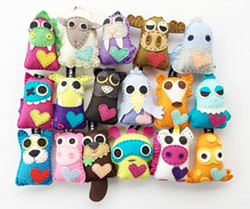 It started out as a simple gift cut and stitched with love, a handwritten wish tucked inside its soft, cotton heart.

When Paso Robles native Rebecca Ruggles wanted to give a gift to her friend's daughters three years ago, she didn't want to grab something from the toy store. Ruggles, who had long been into crafts like embroidery and needle point, decided to take some felt and cotton and make the girls two small critters to call their own.

"They loved them and drug them through the mud everywhere they went," Ruggles said. There was even a hunt for one thought-to-be-lost critter that lasted until 2 a.m. "It was special. It wasn't like their other presents."

At that time, Ruggles was coming off a 10-year career as a tech entrepreneur in Dallas and had recently moved back to the Central Coast. Crafting had always been her way to recharge, but could it be her job?

"I was looking for what that next thing would be," Ruggles said. "I think as humans, we're makers." 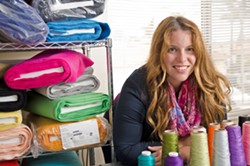 Ruggles wanted others to experience the joy and pride that comes from making something by hand, so last summer she started putting together prototype kits that she dubbed "TubbyWubby." Those included pre-cut pieces of felt, a threaded needle, cotton, a paper clover heart for writing wishes, and step-by-step instructions. She let focus groups of local kids have at 'em, and as a result of their feedback, the critters that ranged from otters to unicorns got small enough to fit in a hand, whittling the crafting time from three hours to just one.

"I wanted people to look at it and say, 'Hey, that's something I can do,'" Ruggles said.

About a year later the TubbyWubby kits that are handmade by Ruggles and a few local helpers are now sold at 16 locations across the Central Coast. Starting this month, they'll also be at retail spots in places like Virginia, Indianapolis, and New York. Crafters who can't get enough can sign up for a TubbyWubby $25-a-month subscription service that sends members the two newest critters plus one mystery kit monthly.

Each TubbyWubby, whether it's Scratch the cat or Moxie the fox, comes with a birth certificate so crafters can write where and when the critter was created. Ruggles enjoys seeing the answers posted on Instagram, with one kid who aptly listed "the kitchen table," as the place of birth. The kits also come wrapped in an illustrated package that is ready to mail once a shipping label is slapped on. She said the kits are made for first time stitchers and can be done by kids as young as 7 with grown-up supervision, but kids who are about 12 can usually handle the craft solo.

Surprisingly though, kids aren't the ones snatching up TubbyWubby kits in droves. Ruggles said about 60 percent of TubbyWubby critter crafters are card-carrying adults.

"It's for kids at heart of all ages," Ruggles said.

She said her favorite part is seeing what people take away from the project. One girl she met had cut out the patterns that come with the kits and used them to make her own unique critters, taking the unicorn pattern to make a zebra and so on. One woman wrote to tell Ruggles that she and her dying mother had a nice moment putting a TubbyWubby together after talking about what was going on got too hard.

"That experience of making something with your hands is unique and real," Ruggles said. "The cute little animal is just the bait to have a moment with yourself or someone else." Δ

Arts Editor Ryah Cooley has too many crafting pins on Pinterest at rcooley@newtimesslo.com.