Do it for Dan!

The first time I ever heard of musicians helping their own was in 1993 when I bought the Victoria Williams tribute album Sweet Relief, which featured a ton of great performers who recorded Williams’ songs to help raise funds to treat her multiple sclerosis. What a concept!

A local version of this philanthropy is happening next week during the third annual SLO Fest, when members of the popular ’90s SLO Town band Itchy McGuirk reunite to play a benefit concert for someone in need, and this year, that someone in need is close indeed.

Dan Ernst, owner of Grand Central Music and Conservatory, is a member of The JD Project, but whenever Itchy reunites, he steps in to play guitar since the passing of the original guitarist Mark Kafoury. Dan’s been diagnosed with chronic kidney failure, and he’s undergoing treatment and is expected to make a full recovery. Yes, Dan’s insured, but as a small business owner, he’s facing hefty co-pays and out-of-pocket costs. SLO Fest to the rescue!

Fresh-from-the-streets hip-hop awaits on Friday, July 13, at SLO Brew when Logic and Tayyib Ali join forces for the VMG Tour (7 p.m.; all ages; $10 presale or $12 at the door), with supporting acts QuEST and Mic Bles. Logic’s been dishing out the sweet rhymes since he was 17. He cites the Wu Tang Clan as his early influence, and his dream is to work with Kanye West. Like Logic, Tayyib is a young rapper who started at 10. Now 18, the Philly-based emcee’s tracks have become East Coast favorites.

Pop punk favorites The Bouncing Souls return to the club on Saturday, July 14 (7 p.m.; all ages; $18 presale or $20 at the door). For 20 years, this independent act has delivered hooky, melodic punk. Guitarist Pete Steinkopf recalled the band’s early roots: “Then we started another band called Brad Karma and the Absent Minded Fruit Bats. There was one song that we had called ‘Quest For Goodie’ and Greg [Attonito] would jump around and sing all kinds of crazy shit to it off the top of his head. We were all teenagers growing up in the suburbs, just looking to create our own fun.” That attitude has continued to serve the band well. Fiery punk-infused rock band The Menzingers, hailing from Scranton, Penn., will open the show to deliver their “rousing sound featuring crashing power chords, rock steady drumming, and anthem-like sing-along choruses alongside powerfully poetic everyman lyrics.”

SLO locals The Mighty Fine play Tuesday, July 17 (7:30 p.m.; all ages; $8 presale or $10 at the door), with The Shell Corporation. The Mighty Fine’s music has been called “literate punk” or “roots-punk” or sometimes “folk-punk,” but, essentially, they have control over a wide variety of styles that they corral into hook-laden pop nuggets with enough edge to keep the jaded on the edge of their bar stools. “We recently recorded a Go Go’s song that will appear on an upcoming Go Go’s tribute CD/LP being released by Solidarity Recordings later this year,” added band member Brook Thompson. The Shell Corporation is, according to their bio, “a band that has been described as Hot Water Music, old Against Me, Jawbreaker, and The Flatliners, but much more handsome and talented, by their respective mothers.” Why I Hate and Random Orbits will open the show.

He’s an ex-professional gambler turned singer-songwriter and she’s a knockout fiddler, and together they’re one of the finest duos you’re likely to hear. On Friday, July 13 (7 p.m.; all ages; $15; call 772-2880), feel lucky when Darryl Purpose and Julie Beaver take to the Coalesce Bookstore stage to perform Darryl’s poignant and powerful songs that have been collected on six critically acclaimed CDs. 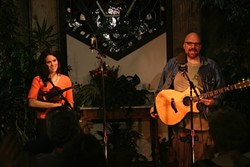 Purpose left his career as a blackjack player in ’96 and became a national touring singer-songwriter, headlining venues such as McCabe’s in Los Angeles, the Kennedy Center in New York, and the Kerrville Folk Festival. He’s been on stage with everyone from Santana, Ellis Paul, and Pete Seeger to David Carter, Tracy Grammer, and Bonnie Raitt. The peace activist also co-founded the Second Strings Project, helping to bring used guitar strings to musicians in need around the globe.

Purpose took a breather from touring in 2004, which is why you haven’t seen him around these parts lately. In 2009, he was inducted into the Blackjack Hall of Fame! Now he’s returned to full-time performing, and this summer he’ll be releasing his first CD of original material in more than 10 years.

He’ll get help from local fiddler and vocalist Julie Beaver, whose musical styles range from classical to the blues and bluegrass. She currently plays with the band Julie & the BadDogs.

On Friday, July 13, Michael on Fire returns to Painted Sky Studio in Harmony, his first local show since the recording studio and music venue moved from its Cambria digs. Last time around, he was with an eight-piece band, but in an effort to create a more intimate space, he’ll perform with a stripped-down ensemble. 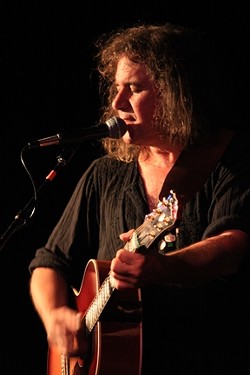 Since his last show here, Michael on Fire has crisscrossed the United States, touring in support of his Always Yes CD, which spent more than half the year (in 2011) on the national Americana radio charts.

If you like heartfelt, Americana music with a rootsy feel, this is your guy! His songs cover a range of topics, such as “oil and banks to drugs and homelessness, technology, war, food preservatives, bee populations, and self-help gurus.”

“I’ve been fortunate to play and record and tour with great, great musicians, all over the world,” said Michael on Fire, “and that is a supremely joyful act—to make music with other people. At the same time, I am an artist, so sometimes it’s necessary for me to create art from a place that bypasses discussion and thought and collaboration, and to use my skills and my natural talents to convey a feel and a sound and a work of art that is uniquely ‘me.’”

When one door closes, another opens for Steve Key. Though he lost his regular Thursday night spot at The Porch, he’s debuting a new venue for his Songwriters at Play showcases on Thursday, July 12, at Upper Crust in SLO (6:30 p.m.; all ages; $10 at the door). Finally, some music I can walk to from my house! The new location kicks off with a tribute to Woody Guthrie to celebrate the 100th anniversary of the birth of Woodrow Wilson “Woody” Guthrie. Hear such classics as “Deportee,” “This Land is Your Land,” “Do Re Mi,” “Vigilante Man,” and many more. Featured performers include Don Lampson, Ted Waterhouse, David Baumgarten, Lost Hills, Steve Key, Randall Lamb, and others to be announced.

On Tuesday, July 17, Kreuzberg will be host to the headlining Joy Mills Band (6:30 p.m.; all ages; pass the hat). Hailing from Seattle, Mills’ band The Starlings “wowed us a couple of years ago, and now Joy returns with a new solo CD, Trick of the Eye,” said concert co-organizer Bonnie Nelson. Mills calls what she does “balladeering and soulful country songs about the ethos and modern myth.” The showcase will also include New York’s Julia Poorman, Chicago’s Captain Ambivalent, Atascadero duo Young Ireland, and Cambria’s Brandon Follett.

D’Anbino Wine Tasting Room starts off the weekend on Friday, July 13, with The QuieT Knights featuring Steve McCann (8 p.m.; $10 … or $5 for Record Club members). Known as “the Voice of the Central Coast,” McCann has performed live with the London Symphony Orchestra and has a rich background as a professional studio musician. He recently won the “Arizona Hot Pipes Award” for the best Male Vocalist performance. Supporting Steve will be QuieT Knights musicians Brett Mitchell on keyboard, Fred Atwood on bass, and Pat Cormick on drums.

On Saturday, July 14, hear the Pam Smith Trio (8 p.m.; $10 … or $5 for Record Club members). Smith’s voice has been heard on many national TV and radio commercials, and she’s appeared all throughout Chicago with her jazz bands, and in New York at the “Persian Room” at the Plaza Hotel. On keyboards, she’ll be accompanied by husband Greg on bass and Casey Barry on drums and percussion. Daughters Chloe and Emily will join the trio on vocals. Special guest artist will be Scott Wright on saxophone.

Finally, on Sunday, July 15, the Famous Jazz Artist Series features Bruce Forman, one of America’s top jazz guitarists. Forman, in addition to his highly praised jazz recordings, scored a number of Clint Eastwood films, most notably the award-winning Million Dollar Baby. There are 4 and 7 p.m. shows for $15 each, or see both for $20. Call 927-0567 for tickets.

If you’re looking for a foot-stomping good time, you’ve got to check out Joe and Vicki Price, playing Friday, July 13, at Linnaea’s Café (8 p.m.) and Saturday, July 14, at Last Stage West (6 p.m.). I recently listened to their 2008 CD A Brand New Place, and Vicki reminded me of Wanda Jackson! The couple’s last CD, Rain or Shine, won the Independent Music Award for Best Blues CD 2010. This is Mississippi magic!

Arroyo Grande’s Village Summer Concert Series at the Rotary Bandstand continues on Sunday, July 15, with a swinging concert featuring The Red Skunk Band delivering a blistering show of hot swing music from the ’20s and ’30s, plus swing dancing by Cal Poly’s Swing Club (1 p.m.; all ages; free). If you like Django Reinhardt’s European hot jazz, you’re going to love this group of young performers who are introducing a whole new generation to this venerated style of music.