'Do the best we can!' Fialta cleans up at the New Times Music Awards 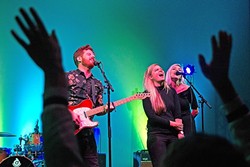 Yeah, they killed it!

After an opening set by The Bucket Busters, the competition began with the Noach Tangeras Band, who won first in the country-Americana-folk category for “Big Sur,” which she played with guest cellist Bob Liepman sitting in. What a big voice she has and what a great songwriter. The Creston Line won second for “Great Depression,” and third went to Natalie Haskins for “Tortured Like Me.”

Best Blues-R&B winners Próxima Parada performed next, and it’s always fun watching lead singer Nick Larson switch from guitar to keys on the same song. These guys are a great blue-eyed soul act whose winning song “Time in a Circle” was recently added to Songpickr: 2016 Best Songs playlist on Spotify. Daesha Frawley won second for “Here We Go,” and Doug Groshart of The JD Project won third for “The Station.”

Fialta came on third and performed all three of their winning songs: “Another Lonely Heart” for Best Open Song; “Be Someone” for second place Rock-Alternative; and “Do the Best We Can” for Best Songwriter. This is a really amazing band that had a big crowd dancing in front of the stage. They couldn’t have been more gracious and humble about their huge win! Four Day Beard brought home second in the Open category for “Feels Like I Might Disintegrate,” and Kristen Black took third for “Bicycle Song.” 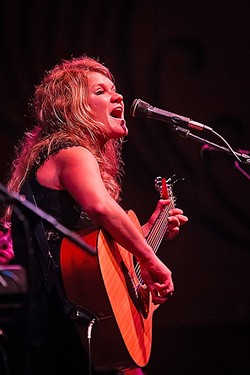 Wynn, who won Best Hip-Hop-Reggae-World for “Take It or Leave It,” got some help from his friend James Kaye, who came up from L.A. to join in. They had the crowd pumped up, especially after they pulled out a beer bong with a selfie camera mounted on it. Wynn also had some choice words for Donald Trump. The crowd roared with delight. Jam Iconz brought home second for their reggae track “If It Hurts This Much,” and Rogue Status won third for “Who Dem.”

The final act of the evening was Rock-Alternative winner Truth About Seafood for their song “Butcher and the Bride.” They were channeling their inner AC/DC, stalking around the stage, wielding their guitars like weapons. Damn they’re tight, but they’ve been together 23 years, so they ought to be. As previously noted, Fialta took second in this category, and third went to King Walrus & the Magicians for “Can I Be the One?”

Just when I thought it was all over, Fialta returned to the stage with members of Próxima Parada, and they launched into Leonard Cohen’s “Hallelujah.” The crowd was spellbound as the singers traded verses, and it was a fittingly tender cap on an amazing night.

The final awards we handed out, including Noach winning second in Best Songwriter for “Big Sur,” and Don Lampson taking third for “Heart of the Chaparral.” As noted, Fialta won Best Album for Shadow of a Drought, second Best Album went to the Shawn Clark Family Band for Cactus Road, and third went to Moonshiner Collective for Consequential Campers.

Thanks to everyone who attended, thanks to all the bands and musicians, and thanks to you, New Times readers, for loving our local music scene as much as we do. We’re lucky ducks to have so much talent in our community.