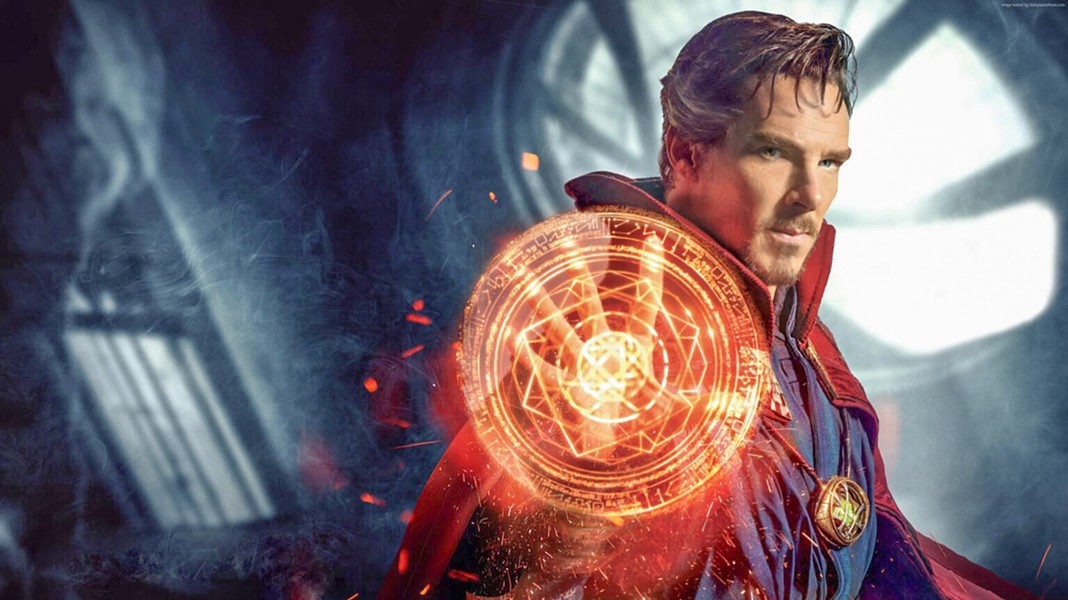 PHOTO COURTESY OF MARVEL STUDIOS YOU PUT A SPELL ON YOU Benedict Cumberbatch reprises his role as Dr. Steven Strange, a Master of the Mystic Arts, who casts a forbidden spell that opens a portal to alternative realities, releasing evil versions of himself, in Doctor Strange in the Multiverse of Madness, playing in local theaters.

Set a few months after the events of Spider-Man: No Way Home (2021), this sequel to Doctor Strange (2016) is directed by Sam Raimi (The Evil Dead, The Quick and the Dead, Spider-Man). Dr. Steven Strange (Benedict Cumberbatch) was a notable surgeon with an outsized ego who endured a terrible car accident that damaged his hands, but he acquired unusual powers, making him a Master of the Mystic Arts. In this story, multiverse-traveling America Chavez (Xochitl Gomez) bursts into his version of reality, and Strange must save her from a pursuing monster; however, he soon casts a forbidden spell, opening a pathway between realities, unleashing chaos, including alternate versions of himself. Can Strange and Wong (Benedict Wong) save our universe, and whose side is Wanda Maximoff (Elizabeth Olsen) on? (126 min.)

Glen This kaleidoscope of special effects is visually stunning to watch, and Cumberbatch's Dr. Strange is a compelling lead with a deadpan sensibility, which is enough to overcome the cluttered nonsense that passes for a story. Perhaps if you're a hardcore Marvel nerd with an encyclopedic knowledge of the Marvel Comics Universe you'd get all the references, but as a casual fan, I found it all a bit cluttered. That said, I enjoyed the film's entertainment value. Raimi is a terrific director, and when you dump a big budget on him, he makes good use of it. The other principal players—fresh-faced newcomer Gomez as Chavez, Wong's gravitas as Wong, and Olsen's Red Witch (playing multiple versions of herself with impressive nuance)—are all watchable. It's also somewhat fitting that the film premiered over the Mother's Day weekend since the fracturing of the multiverse can basically be blamed on Wanda "The Red Witch" Maximoff's maternal desires. Next time just get a dog, Wanda!

Anna I'm not familiar with a lot of the Marvel universe, and Dr. Strange's story in particular is new to me. That being said, I find Cumberbatch fun to watch in this role. The doctor is witty and pompous, somehow overly self-assured while also very fragile. He's lost Christine (Rachel McAdams), who he still pines for, and lives a pretty lonely existence. It's a good fit for the actor who has both bravado and vulnerability in his acting arsenal. The special effects are pretty awesome. From a one-eyed octo-monster to Chavez and Doctor Strange smashing through layers of the multiverse, this film is definitely a feast for the eyes. I also really love Olsen as the Red Witch/Wanda, whose story I was familiar with thanks to the great mini-series WandaVision that came out last year. The film is certainly messy in many ways; there's way too much going on, and often the story feels jumbled and overreaching. However, I have to say that as far as big superhero flicks go, I actually enjoyed this one. As long as you don't spend your time overthinking it, you're in for a fun ride.

Glen Maybe they should have called it Wanda Maximoff and the Motherhood of Madness because in some ways it's more Wanda's story—she has the biggest arc. Her character is both vulnerable and terrifying, and she learns the biggest lesson. Cumberbatch also plays multiple versions of Strange. I was especially entertained when Strange uses the Darkhold (a book of dangerous spells) to "dream-walk" in the corpse of a deceased Strange from another reality. The corpse-walking Strange is tormented by vaporous evil skeletons, reminding viewers that this is a Sam Raimi film with a big-ass budget! If you're not a comic book film fan, don't bother or wait for streaming. If you are a fan, you've already seen it, but if you're on the fence but interested, see a matinee. It's a quasi-blast.

Anna Personally, at this time of year I have to gear up for all the summer blockbuster nonsense that is to come, and this was a great launching pad. Wanda's story is really the glue holding it all together: She's both totally evil and totally sympathetic. Olsen really breathes life into the character, and while her tactics for securing her future are inherently terrible, her desire to be with her children (who aren't really her children but do exist somewhere, sort of) is laudable. If you've got age-appropriate kids and a desire to keep them entertained with a bit of movie magic, this could make for a fun matinee. Δ