Sometimes nothing about art makes sense. Up is down, abstract drips of paint are meant to be thought provoking, and  Spanish painter and sculptor Pablo Picasso, founder of cubism, is credited with inventing an art form over 50 years ago that involved kitchen linoleum—reduction linoleum block printing.

OK, maybe I’m exaggerating a little, but growing up in Los Angeles, reduction lino-cut artist Dave Lefner was constantly intrigued and inspired by his surroundings, and in 1991, realized a few things.

“I was frustrated with the gallery scene and art shows, and with the work that was out there, there was a lot of conceptual things … doing anything and calling it art … but I wanted something different for myself,” he explained.

That was when linoleum came into Lefner’s life.

“People are mostly familiar with a wood or linoleum block in a single color where you carve an image into it, using only black ink, and printing that image onto paper,” he said. According to Lefner, relief block printing has been around for hundreds of years, but in his case, his reduction prints use several colors, between six and nine on each piece.

“The reduction process takes it to a whole different level because you are using a single block to print and a multicolor print. … Picasso was credited with doing it, which is a way to save his editions because you can never go back and print the edition again because you keep carving the block away after each stage, so by the time you’re done there is hardly anything left on the block.”

In much the same way that Picasso wanted to protect his masterpieces, Lefner is a man with a plan. He prints seven pieces of paper, including five editions, one artist proof for his portfolio, and a final one for mistakes.

This is the foundation for Lefner’s work.

Because the ink is oil based it takes a week to dry, the final work taking weeks or months to complete.

It's not an easy task—to convey or complete.

“To create a final piece, you actually have to go through these stages and use skills of an artist … to carve, and come up with an idea … the more I did it the more I realized there was this mystery involved in it. I have an idea of what I want it to look like when I start out,” he said.

Ultimately, Lefner doesn’t know what to expect when it’s over.

Lefner is an artistic masochist, revels in his medium and considers himself a true artisan. “It’s something different, that not many people do anymore because it is so labor intensive,” he said proudly.

Signs and typography of Los Angeles landmarks of a bygone era have become Lefner’s main inspiration; the urban landscape and Lefner’s hand-pulled prints make total sense, even if the process of making them doesn’t. His works consist primarily of neon signs seen in the daylight.

“It’s a twist on things, since you normally think of a neon sign at night, when it looks beautiful,” he explained. “In the day you can see where it’s rusted out and the tubing is broken; there still is beauty there, but it’s not the glamorous look it has at night time.” 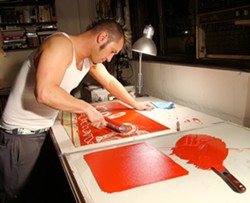 Lefner brings glamour to this kamikaze art process, maybe because some of the most famous images from his hometown have morphed into something he’s not necessarily fond of, so his mission is to preserve their originality.

A big part of his work is documenting the City of Angels, specifically the landmarks that are disappearing from it. Some of the objects he took pictures of for a possible lino-cut don’t even exist anymore in the landscape he calls home. He frowns at the replacement, an electronics store now inhabiting an old, fabulous theater space.

He’s exhibiting in SLO because his artwork “tips his hat to the past” and the Central Coast will appreciate that.

“Preserving something that has meaning … it’s an escape.”

Lefner, a 39-year-old rebel, doing a half-century-old art form that is virtually unheard of, shows around three to four times a year, and maintains his career without representation. He’s self-made, in more ways than one. His work is collected worldwide. And Lefner lives among 300 lofts at the Brewery Art Colony in downtown L.A., a 30-year-old space, the world’s largest artist community, and the only of its kind in the United States.

Christy Heron ----is just a regular masochist. Whip her into shape at cheron@newtimesslo.com.