Who says being in the doghouse is always a bad thing? Doghouse Promotions, a local corporate branding and promotions agency, works with marketing needs of businesses large and small by branding useful products (think T-shirts and water bottles). For Liz and Brian Espy, co-owners and husband-and-wife team, being in the doghouse is excellent. The two have worked together since 1999 and saw the inside of many modest office spaces, including various garages, before moving to Morro Bay more than a decade ago. Now, Doghouse has made the move to just outside of downtown San Luis Obispo, in a historic building on South Higuera alongside another new business, The Station.

“We’ve created a business that supports our lifestyle,” Liz said. “Big corporate jobs wasn’t a fit for us.” 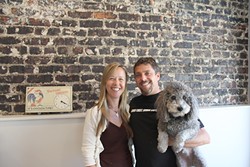 That big corporate lifestyle would almost seem in line with the business and clients Doghouse has cultivated, because it’s bagged some big accounts.

Brian was a graphic communications major at Cal Poly and started screen-printing in his house in the late ’90s in Los Osos, while his roommate at the time glassed surfboards.

“There were these two big black dogs,” Brian said, “No matter how clean they kept the shop, there would always be dog hairs in the white surfboards.”

Brian’s roommate used the name Doghouse Fiberglass for a while before growing his business and changing the name to Central Coast Fiberglass. By this time, Liz was working for a family friend in Santa Cruz, where she learned how to run a small business. She eventually joined Brian, and they formed Doghouse Promotions, choosing the name to pay tribute to its humble beginnings. According to Brian, in their first year the business tripled in size, and then it doubled in size in their second year.

And so, Brian said, they could finally leave the makeshift garage office space environment behind.

Liz said that Doghouse “really grew organically” during their time with ESPN and its parent company, Disney, which referred them to other big-named clients.

“It’s a relationship business,” Liz said. “The relationships you build and the approach you take.”

According to Liz, at one point, they were dealing with all the ESPN offices around the country, working from a small office in Morro Bay.

“We worked really hard for a solid 10 years to be able to reap the benefits of the fruits of our labor,” Liz said.

For almost 12 years, they did this with only three people.

They moved to their new location, 309 Higuera St., in February of this year. Now, their employee list is up to five, but that’s nothing compared to their client list.

“We have 75 to 80 different active businesses, maybe over a hundred,” Liz said.

As they grow, they hope to attract those from SLO’s small business community.

“We’ve been in your shoes as a small growing business,” Liz said. “The expertise that we’ve developed over the last 15 years can really help local businesses grow by authentically representing their brand.”

The Espys want to share their experience starting small, and growing toward success.

“We would like to see local businesses succeed as we have,” Liz said.

The American Solar Energy Society is presenting the Solar and Green Building Tour on Oct. 18 from 1 to 4 p.m. Find information at nationalsolartour.org.