The U.S. Department of Justice (DOJ) released the results of a three-year investigation into the San Luis Obispo County Jail on Aug. 31, concluding that the jail violates the constitutional rights of inmates on several fronts, including by failing to provide adequate medical and mental health care and by using excessive force with impunity.

Sparked in 2018 by the high-profile inmate death of Andrew Holland, who spent 46 hours strapped to a restraint chair before dying of a pulmonary embolism, the DOJ's civil rights investigation found specific and systemic violations at the jail—and called on SLO County to cooperate on reforms or face a federal lawsuit.

"After a comprehensive investigation, we found that the San Luis Obispo Jail harms the people it incarcerates," Kristen Clarke, assistant attorney general of the DOJ's Civil Rights Division, said in a statement.

The DOJ investigation detailed dozens of examples of alleged violations at the SLO County Jail between 2016 and 2019, which highlight sweeping failures in the areas of medical care, mental health care, excessive force, prolonged restrictive housing, and compliance with ADA (Americans with Disability Act) laws. A few examples include:

• Before jail custody staff strapped Holland to a restraint chair in January 2017, the Sheriff's Office held the 36-year-old with schizophrenia in isolation for approximately 16 months, and did not deliver him involuntary medication as required by a court.

• In April 2017, an inmate with hypertension died of a heart attack after the jail gave him high doses of ibuprofen and ignored his complaints of chest pain and other symptoms.

• In September 2018, an inmate committed suicide after a court ordered a mental health evaluation, which never took place.

• In December 2018, a deputy grabbed an unresisting inmate from behind and pushed him headfirst into a wall, causing him to bleed, after he'd yelled at the deputy from a "caged area." The deputy claimed in an incident report that the inmate "fell forward" into the wall.

• In January 2019, an inmate diagnosed with hepatitis C was never provided treatment during the 18 months of his remaining sentence.

• In April 2019, an inmate who tested positive for HIV did not see a specialist or receive medication for nearly three months.

The DOJ's report, which thanked SLO County for its cooperation in the investigation, added that many of the constitutional violations persisted even after the county invested in jail improvements in 2018 and 2019, which included outsourcing jail health care services to a private firm, Wellpath.

"Although the jail added the chief medical officer position and switched medical providers two years after [Holland's] death, medical care under Wellpath has not significantly improved," the investigation stated. 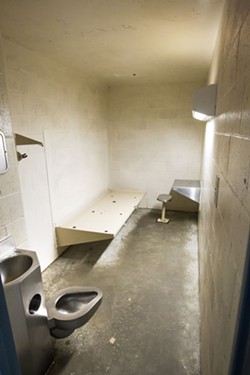 Continued problems at the jail include Wellpath frequently dismissing or falling short of addressing inmate medical and mental health concerns; failing to provide adequate medical care for pregnant inmates; refusing to provide treatment for chronic conditions when inmates are scheduled to be released "soon"; staffing shortages; and a lack of oversight of Wellpath's performance.

In a statement issued on Aug. 31 in response to the DOJ's findings, the SLO County Sheriff's Office said that it "recognizes the issues and concerns brought forth."

The Sheriff's Office also defended the jail. It claimed that the DOJ investigation failed to take into account "the many remedial measures undertaken by the Sheriff's Office since 2018." Those improvements, according to the Sheriff's Office, include reducing the number of days that individuals with serious mental illnesses are in county jail and adding facilities and programs designed to serve the medical and mental health needs of inmates.

"The Sheriff's Office has worked cooperatively with the DOJ over the past three years to investigate deficiencies and determine appropriate improvements to ensure our jail facility is fully compliant with federal law," Sheriff Ian Parkinson said in the statement. "We are pleased with our progress so far and will continue to work diligently to provide a safe and secure jail facility."

The Sheriff's Office statement added that it takes excessive force seriously and investigates all complaints. That assertion clashed with the DOJ investigation, which found that the jail "consistently" failed to adequately investigate use of force incidents, often ignoring or omitting "critical evidence, including video footage."

"In many cases, ... clear inconsistencies between narrative accounts and video footage were unaddressed," the investigation stated.

The Andrew Holland Foundation, which formed after the Holland family reached a $5 million settlement with the county over Andrew's death, said in a statement to New Times that the DOJ's findings demonstrate the "inhumane patterns and practices continually found" at the jail and underscore the need for better mental health care services and facilities throughout SLO County.

"The Justice Department's exhaustive and comprehensive report found gross negligence toward those with mental illness and special needs for one reason: The jail is the wrong place to house and treat those with mental illness," read the joint statement by foundation President Sharon Holland, who's Andrew's mother, and Executive Director Anna Boyd-Bucy. "We don't need more money for jail expansion, we need accessible treatment that will house and rehabilitate those with brain disease. When we have a jail trying to perform as a mental hospital, they will fail and the cost is enormous both in dollars and lives."

Holland and Boyd-Bucy added that while Parkinson and the county's efforts to reform the jail since 2017 have "not gone unnoticed," the foundation "still receives many calls regarding mistreatment of the mentally ill."

The report "comes as no surprise," they said.

The DOJ investigation concluded with an extensive list of remedial measures for the jail, which it says the county must work to implement to avoid a lawsuit.

"We look forward to working cooperatively with the SLO County Jail and its administrators and staff to ensure that these violations are remedied," the report read. Δ