Domestic Tiger revamps itself as a trio and releases Night Brain

When Domestic Tiger (Facebook, Instagram) won best rock/alternative song in the 2019 NTMAs for "Salt," it was an easy choice. The alt-rock act  had all the earmarks of a ripping good band: tight musicianship, crafty songwriting, great vocals, and huge energy. I expected to see a lot more of them, but then the 'rona came to town and all things live music fell to pieces.

To top it off, amid the pandemic lockdown, the former quintet shrunk when drummer Tom Johnson left for the Montana mountains while bassist Javier Cadena turned his attention to a new business venture. It's hard to be a rock band with no rhythm section. 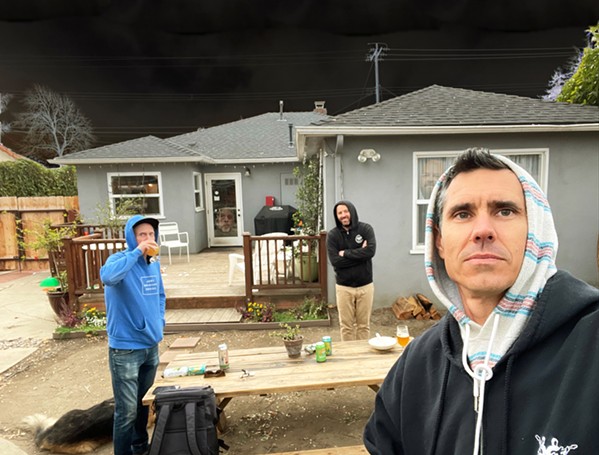 The remaining three members—Evan Ball (producer/vocalist/guitarist), Tyson Maulhardt (guitar), and Mike Hicks (vocals, guitar)—were all locked up with nowhere to go, no shows to play, and for the final nail in the coffin, they were evicted from their rehearsal space. Well, you can't keep a good band down, and necessity breeds innovation.

The remaining trio began exchanging music files via Apple's Logic Pro "in hopes of resuscitating the band," they said via email.

"I had this riff that I couldn't get out of my head," Maulhardt said. "It was two parts and recorded on my phone, but I knew it had potential. Evan and Mike made it sound good from there."

Soon the ideas were pouring out, inspired by the weirdness that was 2020.

"I spent so many evenings going for runs through a deserted downtown just to look at it," Hicks recalled. "It was awesome. So sad, but I couldn't look away. Like that weird movie that stays with you the next day."

Without a rhythm section, Domestic Tiger had to pivot further, in a direction a lot of rock bands are loath to go: electronic beats and synthesizer.

"It was definitely a liberating process creatively," Ball said. "It was refreshing to not be required to use standard instruments."

The results of their collaboration and new direction can be heard on Night Brain, which was released to streaming platforms on Jan. 22.

"There were so many positive takeaways from last year," Hicks added. "We've all been given a special opportunity to reset and focus on what we want to, not what we have to."

It's very fresh and fun approach, which you can hear from the first track, "Here Now," that kicks off with a very atmospheric wall of synth before flowing into a guitar-driven rock track. There are also a lot of vocal effects that give added oomph to the song's key idea: "Here now. Don't forget to breathe."

"Bored" begins with a really interesting syncopated rhythm, and its anthem-like chorus about pandemic fatigue will have you hooked: "Can't keep the room from spinning. One day it all just stops. Look like an elevator, getting closer to the top oh yeah so what? You want a life of meaning, freeze all that minor chord. Soon we'll take back our lost time. What a day we'll miss when we were bored."

All five of the EP's songs are alt-rock gems with the sort of innovative production and sound effects that will keep you coming back for another listen. Check it out on your favorite streaming platform!

I can pretty much depend on North County musician John Wessel to release a new album every year. Even when there's not a pandemic and he's playing shows three or four nights a week, he still manages to put one out. This year he's released Forever and Always, which features a dozen tracks, some co-written by James "Jimi" Macon of The Gap Band, who also plays on the new record.

"I'm already writing half the album for 2022," Wessel wrote via email. "But I'm having a lot of fun working on a solo show that I plan on doing. I thought I never would do a solo show but after playing by myself so much lately—I did all my own backing tracks played all the instruments—I can just play piano and sing and play flute and saxophone over my tracks. I think that the bar scene and our restaurants will be looking to spend less money, so just in case, as a solo act I can work reasonably cheap."

Wessel, a multi-instrumental and wicked good reed player, may be best known as a member of Shameless, one of the hardest working bar bands in the county. So much has changed due to the pandemic that he's wisely adapting. Music is in his blood, and I know he'll never stop playing.

On this new album, there are a lot of great tracks, but "Finding Peace" co-written with Macon really stands out to me. The instrumental has amazing musicianship. Likewise, Wessel's flute and reedy tenor voice soar on Gary Moore's "Still Got the Blues," one of two cover songs on the album. The other is Procol Harum's classic "Whiter Shade of Pale," which is also right in Wessel's wheelhouse.

Wessel's originals come from the sounds he loves, music of the '60s and '70s, and are well crafted. You can hear this and more of Wessel's music at n1m.com/johnwessel. Purchase at Rhombus Records. Δ