“My handsome twin brother is coming down from Portland to celebrate his new jazz album with us here in SLO,” Damon said wryly. “He’ll be joined on drums by Brent Follis (of Pink Martini) and local bass phenom Dylan Johnson, plus special guests!”

Normally a rock guy, this time around, Dominic decided to record a jazz album, in part, because after experiencing a home invasion robbery, he realized life was too short not to do new things. 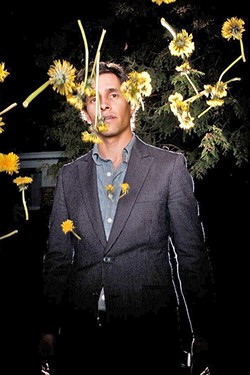 “I think after the break-in, I just felt like mixing it up a bit,” Dominic said. “There was a moment during the fight when I wasn’t sure I was going to make it.”

Dominic sustained a broken wrist, cuts, and bruises, but survived.

“That event gave me a little time to reflect and refocus. I’ve always loved jazz, and jazz guitar. It’s a sound that’s always been in my head. Of course, I can get psychological. I think there’s more to why I really needed jazz after the break-in. The way jazz works, when you’re playing it, your memories disappear, your attention is completely harnessed into creation. I may have leaned on it for relief from my own thoughts, to manage the anger and anxiety.”

Dominic’s eponymous EP mixes standards such as “La Vie En Rose” and “It Could Happen to You” as well as his originals. Each of the six tracks is a little gem that highlights Dominic’s skillful singing and crisp guitar work.

It opens with “Get Things Done for my Baby,” a swinging original that’s poppy without being saccharin, and it features a killer sax solo by Portland’s Leon Cotter. On George and Ira Gershwins’ “But Not For Me,” Dominic channels Chet Baker at his most rueful.

This is a terrific new record; my only criticism is at six songs, it’s too damn short.

Sometimes the easiest way to get to know a culture is through its music, which is why this Saturday, March 18, might be a great time to learn more about Arab culture when the Cal Poly Arab Music Ensemble and special guest artists will perform a program of music and dance from North Africa, the Eastern Mediterranean, and the larger region in Harman Hall of the Performing Arts Center (8 p.m.; all ages; $12 and $14 general admission and $9 and $12 student tickets available at 756-4849 or online at calpolyarts.org).

“The show will include traditional and contemporary genres such as the muwashshah, one of the oldest continuously performed art-music genres in the world,” according to press materials. “Additional genres to be performed come from the shared music traditions of the Ottoman era, including the short introductory dulab and the more elaborate samai with its 10-beat metric mode.”

Cal Poly music professor Ken Habib, a composer, performer, and scholar in the field of ethnomusicology, will direct the show.

Americana royalty—15-time Grammy Award winner Béla Fleck and his critically acclaimed wife, Abigail Washburn—recently released their first album, a self-titled affair featuring a dozen banjo-driven tunes, some traditional music, and some originals, from which they’ll draw this Sunday, March 19, when the duo plays the Performing Arts Center (7 p.m.; all ages; $34 to $54 adult tickets and $27.20 to $43.20 student tickets available at 756-4849 or online at calpolyarts.org).

Fleck is arguably the most talented and innovative banjo player alive, maybe ever, and Washburn has one of the most arresting voices in Americana music and is no slouch on the banjo herself. Their new album, which they dedicated to their now-toddler Juno, is a remarkable collection of songs, starting with a minor key version of the classic children’s song “Railroad,” as in “I’ve been workin’ on the railroad all my live long days.” The minor key lends a haunting and more somber tone to the usually perky song.

Some of the best lyrics on the album come from Washburn, who can create chilling laments. In “Shotgun Blues,” she sings, “If I had a shotgun/ You’d fall down on your knees/ I’d get you talkin’/ And you’d start beggin’ please// If I thought you felt bad/ ’Bout what you done to me/ I’d let you go/ But boy you’re just too mean// Wish I was a big girl/ Could let my heart be free/ But if I was a big girl/ I’d have hung you in a tree.”

Fleck, too, has penned some solid songs, especially “What’cha Gonna Do.”

“I found my self singing this chorus one day and realized my mind had offered it up in response to the tsunamis that devastated Bande Aceh, Indonesia, and Honshu, Japan,” Fleck wrote in the album’s liner notes. “With global warming and the future of our planet on everybody’s minds, the rest of the lyrics came quickly.”

This ought to be a pretty incredible concert from a couple who decided to tour together so they could spend more time with their new family.

“I come from a broken home, and I have a lot of musician friends who missed their kids’ childhoods because they were touring,” Fleck explained in press materials. “I don’t want to be somebody that Juno sees only once in a while. We need to be together, and this is a way we can be together a whole lot more.”

It’s going to be all things music related up at Tooth & Nail Winery this Sunday, March 19, when the winery hosts the family friendly Central Coast Music-Con (1 to 8 p.m.; all ages; free).

“It features performances from local artists such as Baywood Jones and the Bucket Busters, workshops for all levels of musicians, jam sessions led by local pros, and booths from a number of local businesses,” organizer Vince Cimo explained. “There’s also a kid zone, with free drum and keyboard lessons for children as well as a recording area, where you can sign up to record a free demo. This event is open to the general public but if you’re a musician be sure to bring your instrument!”

You can find a complete schedule of events at bigbigslo.com/music.con, where you can pre-register and get yourself a free raffle ticket for a chance to win some great prizes from local music businesses. Prizes include at Ernie Ball guitar! Don’t miss this great community-building event!

Don’t forget that Numbskull and Good Medicine Presents has country artist Sam Riggs playing this Thursday, March 16, at BarrelHouse Brewing (6 p.m.; all ages; $16 presale at ticketfly.com or $20 at the door) with Joe Koenig and the Homewreckers opening. Riggs is a rising star who keeps getting bigger and bigger! Catch him while you can.

Cal Poly’s 70-member Wind Ensemble and 80-member Wind Orchestra will play Cal Poly’s Winter Band Concert this Friday, March 17 (8 p.m.; all ages; $12 and $14 general admission tickets or $9 and $12 for students at 756-4849 or online at calpolyarts.org), in Harman Hall of the Performing Arts Center.

Truth About Seafood plays a St. Paddy’s Day party at Old Cayucos Tavern on Friday, March 17 (9:30 p.m.; 21-and-older; free). This quartet of rockers knows how to play a party!

Rockabilly band the Bonneville Phantoms plays a St. Paddy’s Day party at Luna Red on Friday, March 17 (10 p.m. to midnight; free). “We’ve been together a little over a year,” band member Sebastian Luna said, “and it’s our first show in SLO.”

Unfinished Business brings their Beatles tribute show to D’Anbino’s Tasting Room on Friday, March 17 (8 p.m.; 21-and-older; $15 reservations at 227-6800), where they’ll be performing two Beatles hits new to their repertoire, “Revolution” and “Lady Madonna.” They return to D’Anbino’s on Saturday, March 18, with their ’60s Rock and Roll Dance Party with Creedence, Stones, Beach Boys, and more (8 p.m.; 21-and-older; $15 reservations at 227-6800), where they’re adding the Beach Boys’ first hit songs “Surfin’ Safari” to their repertoire. 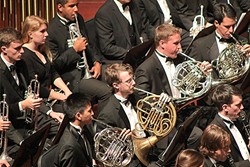 Songwriters at Play presents Nashville singer-songwriters Lynn Langham and Doug Gill at three showcases this week: Friday, March 17, at The Porch (7 p.m.; all ages); Sunday, March 19, at Sculpterra (1 p.m.; all ages); and Monday, March 20, at the Morro Bay Wine Seller (6:30 p.m.; 21-and-older). All shows are free but donations will be gratefully accepted. Lynn and Doug have played iconic venues such as The Bluebird Café.

The San Luis Chamber Orchestra plays its spring concert on Sunday, March 19 (3 p.m.; all ages; $10 at the door), in the First United Methodist Church of Arroyo Grande, with Mark Kovacs conducting pieces by Schubert, Bach, John Williams Hans Zimmer, and others. 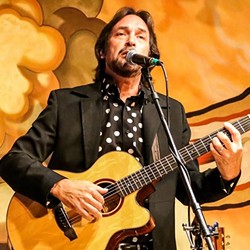 The Cuesta College Choirs present Madrigal Madness on Sunday, March 19 (3 p.m.; all ages; $15 general admission or $10 for students at 546-3198 or online at cpactickets.cuesta.edu), at the Cuesta College Cultural and Performing Arts Center. Known for their humor, romance, and scandal, expect madrigals spanning 500 years performed by The Chamber Singers and Concert Choir, as well as an all a cappella set by Voce.

SLO Brew hosts local country and Americana act The Shawn Clark Family Band on Tuesday, March 21 (10 p.m.; 21-and-older; free) for Pint Night. “Inspired when hearing Townes Van Zandt’s version of the Rolling Stones’ ‘Dead Flowers’ while watching the film, The Big Lebowski, Shawn Clark thought, ‘I want to write music that sounds like that’” according to his bio. “Two years later, he has two albums, a fine group of fellow musicians making up the Shawn Clark Family Band, and his sights set on bringing this old-style country music to a wider audience.”