One of the benefits of being a talented old cruster who’s been playing music and living in SLO County for decades is you eventually meet all the other great pickers, pluckers, and bowers in the area and can gather them together every once in a while for a super show, which is exactly what New Times Music Award-winner, exotic animal handler, crack shot, and irascible lady charmer Don Lampson plans when he brings The Vigilante String Alliance to Steynberg Gallery on Saturday, Jan. 28 (7 p.m.; all ages; $15 presale at 547-0278 or $20 at the door), for his mid-winter musicale.

“Get ready for a magic evening of music and song,” Lampson said. “This ensemble will delight every eardrum in the house. Come to the show. You’ll thank yourself for weeks afterwards!”

The SLO Blues Society has been bringing great blues music to the Central Coast since 1980, making it the third oldest blues society in the U.S. During that time they’ve created a real community of people who like to get down and boogie, and this Saturday, Jan. 28, they’ve got another killer blues show lined up when Rod Piazza and the Mighty Flyers come to the SLO Vets Hall (8 p.m.; 21-and-older; $25 tickets at Boo Boo Records, Cheap Thrills, or at the door; become a Blues Society member and pay just $20! Come at 7:30 p.m. for some free dance lessons.).

Piazza’s enjoyed a long and storied career in the blues world, cutting his first recordings in the ’60s as The Dirty Blues Band frontman. The virtuoso mouth harp player—who counts George “Harmonica” Smith, Sonny Boy Williamson, and Little Walter among his mentors—eventually formed the Mighty Flyers in 1980, recording 26 albums to date.

The West Coast blues scene staple mixes Chicago grit, West Coast swing, and the driving rhythms of early rock and R&B, as well as jump blues of the ’40s and ’50s.

Local “boogie blues and swampified rock” band The Cliffnotes will open with their rousing sounds behind powerhouse vocalist Valerie Johnson, who was tapped by Big Brother & The Holding Co. to take Janis Joplin’s place.

Don’t forget that this Thursday, Jan. 26, Orgone plays SLO Brew (10:30 p.m.; 18-and-older; $10), bringing their “dirty, organic, California soul with heart; music that grabs you by the collar, pulls you to your feet and shoves you wantonly onto the dance floor,” according to their bio.

“We intend our music to have an inhibition-canceling effect,” founding guitarist Sergio Rios explained in press materials. “It speaks to those who may have wallflower tendencies, encouraging everyone to own the freakiness that lives inside them, to enjoy the spotlight for a little while. Sometimes it takes a nudge to let go and get on the dance floor. And sometimes it takes a big ol’ push ... a love shove, if you will. And we’re well versed in those.”

On Tuesday, Jan. 31, SLO Brew hosts Mike Annuzzi, RIVVRS, and The Brevet (11 p.m.; 18-and-older) for a night of alternative folk, pop, soul, and Americana roots music. Annuzzi won the West Coast Songwriters International Song Contest Singer-Songwriter of the Year in 2013 and San Francisco’s Song of the Year 2010. RIVVRS is an LA-based singer-songwriter who blends alt-folk, pop, and soul. The Brevet “channels a rustic, raw, and real energy, stitching together threads of soundtrack-style overtones, rock power, and Americana spirit,” according to press materials. 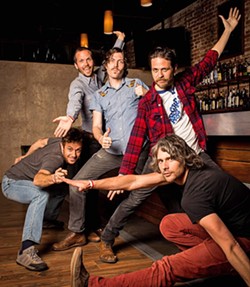 Wake up to the Coma Bros.

Good Medicine Presents and Numbskull hosts The Brothers Comatose next Thursday, Feb. 2, at Fremont Theater (7 p.m.; all ages; $18 presale at Boo Boo Records or ticketfly.com or $20 at the door).

This is a brilliantly engaging string band whose third album, City Painted Gold, is absolutely infectious.

“It all sort of started before we ever picked up instruments,” Ben explained. “Our mom was in a folk quartet that sang beautiful songs in harmony. Alex and I would watch them rehearse for hours when we were kids.”

They eventually took up playing themselves, first learning classic rock covers before drifting toward Americana. They formed their band by posting fliers in San Francisco, and soon they had Philip Brezina, who was pursuing a master’s degree in violin performance at the Conservatory of Music.

“When he showed up, I thought, who the hell is this guy?” Ben asked. “He’s kind of a redneck but he’s getting his master’s in classical violin. Turned out to work pretty well.”

This is a tight, engaging band that’s clearly having fun on stage. If you haven’t had a chance to see these guys live, get your tickets!

“We wrote this album living in San Francisco as it was changing from a weird, art friendly mecca to a place that only super rich tech workers could afford,” Ben explained. “Things started changing—venues were closing down, and artist and musician friends moved away. What is San Francisco without its weirdoes? That’s what the song ‘City Painted Gold’ is about and that’s why it’s the name of this record.” 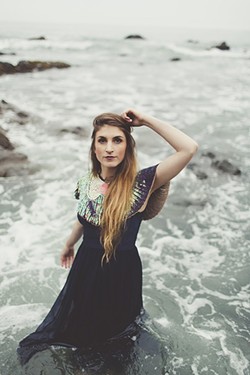 Toney Rocks plays this Thursday, Jan. 26, at Last Stage West (6 p.m.; all ages). Expect soulful singing as he accompanies himself on acoustic guitar, ukulele, and piano.

Foxx & Rice brings their soul-pop-R&B-flavored tunes to Frog and Peach on Thursday, Jan. 26 (7:45 p.m.; 21-and-older; free). The sextet “began as a duo with Allison Rice as a budding songwriter on guitar and vocals and Laura Foxx on clarinet and saxophone,” according to their bio. “They’ve grown into a full band including Colleen Gnos on stand-up bass, Allan Laureano on lead guitar, Chad Hinkle on drums, and Drew Araujo doing freestyle on selected songs.”

Amazing jazz, blues, and roots vocalist Nicole Stromsoe returns to D’Anbino on Friday, Jan. 27 (8 p.m.; 21-and-older; $15 at 227-6800). “I’ll be performing as a sextet, which is my most current and preferred group to play in yet,” she said in an email. “Dorian Michael will be playing guitar, Ken Hustad on the stand-up bass, Dean Giles on drum set, Darrell Voss on vibraphone (as well as percussion), and Danny Pelfrey on the saxophone. I feel super fortunate to sing and create with such a talented group, especially at a venue like D’Anbino, which has got to be one of my favorite places to perform on the Central Coast.”

Folk-rock singer-songwriter and on-stage looper Amy Obenski returns with two shows this week, starting Friday, Jan. 27, at Paso’s Tin City Cider (6 p.m.; all ages; pass-the-hat). With an ethereal and dreamy sound made richer by looping technology, the engaging chanteuse has now recorded six albums of original material. You can also see her at Linnaea’s Café on Saturday, Jan. 28 (7 p.m.; all ages; pass-the-hat).

The Kristen Black Band plays D’Anbino this Saturday, Jan. 28 (8 p.m.; 21-and-older; $10 at 227-6800). The minx-like singer-songwriter and New Times Music Award-winner plays everything from rock to folk to pop, and she may throw a little melodic punk rock at you!

The Basin Street Regulars have a great hot jazz concert cooked up for you this Sunday, Jan. 29, when the Yosemite Jazz Band from Oakhurst and our own Rag Bone Saints play the Pismo Beach Vets Hall (1 p.m.; all ages; $10. Come at 11 a.m. with your instrument for a jam session).

Kendra McKinley comes to Frog and Peach for pint night Tuesday, Jan. 31 (21-and-older). She “perceives a song like a painter views a blank canvas: an opportunity to expand an audience’s mind, to wash their thoughts in brilliant hues of blue and violet, scarlet reds and effusive orange,” said the pop singer’s bio.

Billing themselves as a cosmic-Americana band, Grant Farm features vocalist and National Flatpicking Guitar Champion Tyler Grant, who formed his band in 2009 in Boulder, Colo. Great musicianship combines with psychedelic folk in this band that will play Frog and Peach on Wednesday, Feb. 1 (9 p.m.; 21-and-older; free). If you like the Grateful Dead, come on down!

If you want to buy some records, sell some records, or swap some records, come to the SLO Guild Hall this Saturday, Jan. 28, from 11 a.m. to 3 p.m. for the SLO Record Swap (all ages; $2 admission; email slorecordswap@gmail.com for vendor info).