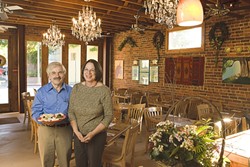 The Wild Donkey Café, located in downtown San Luis Obispo, showcases the culinary classics of both Greek and Mexican food, a combination of flavors powerful enough to throw many local food lovers’ taste buds into a frenzy.

George Kartsiuokas, who owns the restaurant along with his wife of 34 years, Kay, said serving Greek and Mexican food “just came natural” because of how long he and his wife have been in the restaurant industry. George also said he and his wife “wanted to start a restaurant that would tie the community together,” and they believe they have the culinary talent to bestow SLO with the best of both cultures’ classic dishes.

Kay Kartsioukas has Greek heritage and was first introduced to authentic Mexican food while growing up in San Francisco’s Mission District.

“I would play with all the Mexican kids that lived in my neighborhood,” Kay said. “Sometimes my mother would invite them over for dinner, and we would eat Greek food; sometimes I would spend dinner over at their house and eat Mexican food.”

According to Kay, the two cultural foods are actually quite similar.

“Mexican food uses limes, Greek uses lemons,” she explained. “Greek foods use oregano heavily, Mexican food has oregano also, just not as much. It’s all about the different levels of spices.”

George and Kay first met when Kay, who had become bored with music school, took a job as a waitress at a restaurant in San Francisco where George worked as a chef. The two eventually fell in love, married, and a short time later they opened a restaurant on the corner of Haight and Ashbury called Bambinos, from which they served both Italian and Greek food for more than a decade.

While living in San Francisco, the couple frequently traveled to SLO to escape the big city, and they began to dream of starting a new restaurant and relocating one day.

The couple set the goal in motion when they purchased the building occupied by Tio Alberto’s in 2007. Six months later, they sold their home and restaurant and moved.

The seemingly perfect location for their new restaurant proved to be a greater challenge than the restaurant-savvy George could ever imagine.

“We spent eight months completely changing the interior,” he said. “It was a mess.”

Just about every aspect of the space had to be completely remodeled to fit current earthquake codes, so the couple decided to take the extra step to make the space their own, including installing new doors and windows, flooring, and removing walls to expose the original brick. They built a new stainless steel kitchen from which to cook their masterpieces and a bar where customers can sit and enjoy a glass of wine.

When asked if he ever felt like quitting, George responded in a Greek accent, “In my culture, we have a saying: If someone takes your hand and pulls you onto the dance floor, even if you don’t know how to dance, you do it.”

The inside of The Wild Donkey Café is painted in bright colors reminiscent of the robust spices and flavors found in the food they serve. The art on the walls—a mixture of Mexican, Greek, and pop art—effectively creates a vibrant and lively atmosphere.

The Wild Donkey Café got its name from Kay, whose paintings of donkeys always seemed to have a “wild” look to them. Kay also alluded to a deeper meaning: the importance of donkeys in both Greek and Mexican culture.

“Both cultures depend on the donkey so much because it enables them to travel and helps them with farming,” she said. “It is truly an important animal.”

The Peer Advisory 7 Advocacy Team and Family Services of Transitions-Mental Health Association, along with the Central Coast Psychological Association, will hold “Journey of Hope,” a mental wellness forum, from 8:30 a.m. to 12:30 p.m. on Jan. 28 at New Life Church in Pismo Beach. For more information, call Shannon McOuat at 550-7692 or e-mail her at shannon@t-mha.org. …