New zoning regulations for SLO bars in; additional public restrooms and taxis are out

You've likely heard the stories: After a night of soaking suds, late-night bar patrons go traipsing through neighborhoods, get behind the wheel, or even go waltzing into someone else’s home and pass out. 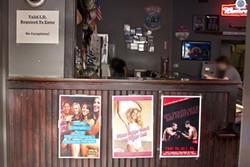 These are some of the problems San Luis Obispo City officials want to curb. After two years of study, the City Council has endorsed a set of recommendations that would give more power to local officials to regulate alcohol venues in town.

But perhaps equally interesting are the recommendations that have been taken off the table.

On Nov. 15, the City Council heard a presentation by outgoing Chief of Police Deb Linden updating them on a new set of possible strategies created by a mediating organization tasked with getting local stakeholders—bar owners and operators, community leaders, and law enforcement—to sit at the same table.

In March 2011, the city, armed with a $9,640 grant from California Alcoholic Beverage Control (ABC), contracted the Santa Cruz-based nonprofit organization Responsible Hospitality Institute to draft a report with new strategies to mitigate problems related to alcohol.

That final report came out in July, and city staffers endorsed a number of its recommendations, including new zoning regulations requiring conditional-use permits for establishments looking to serve alcohol in the city.

Currently, local communities have limited control over regulating such businesses, which are licensed through the state. However, some city governments have had success with zoning ordinances, according to a Nov. 15 city staff report. For example, a business may be denied a liquor license if that license conflicts with existing land uses.

The SLO City Council seemed to like that idea of greater control, and is now looking to create such a zoning ordinance, but it likely won’t be across the board. While a requirement for use permits for new businesses gives the city leverage in enforcing community standards of operation—such as preventing restaurants from “morphing” into a nightclub after the kitchen closes—existing businesses are being grandfathered in.

The city is favoring a “deemed-approved ordinance” for preexisting businesses, as long as those establishments comply with a set of general performance standards, said Doug Davidson, deputy director for the SLO Community Development Department.

Exactly what constitutes a violation, however, isn’t exactly clear, and will be judged on a case-by-case basis.

“The situation is complex, the strategies are varied … this is not something where we can do two or three things and the problems just go away,” Linden said. “That’s just not realistic.”

The latest report is the second such report drafted for the city. In October 2009, the council coughed up more than $22,000 to a Berkeley consultant in exchange for a study examining late-night “police events” stemming from alcohol venues. Not surprisingly to most observers, the study found the two were related.

However, that report upset a slew of local business owners and their patrons, many of whom questioned its methodology. For example, some people doubted the validity of a report that only studied one year (2008) when some 21,643 incidents were recorded. The study found that 65 percent of arrests made downtown were alcohol- or drug-related, but also found that only 15 percent of all such incidents citywide happened downtown.

Since then, a number of high-profile DUI fatalities originating from downtown have put the topic back in the public conversation. Tensions between business owners and the city, however, have cooled.

Linden said she’s encouraged by the newly formed Safe Nightlife Association (SNA), which consists of 14 members from downtown bars and restaurants, meets bi-monthly, and has begun implementing its own strategies. The “One 86, All 86” campaign, for example, where a rowdy patron can be expelled from every bar for a night, began during the busy Halloween weekend and has already proven successful, according to Steve Tolley, a retired SLOPD lieutenant who has signed on as the association’s coordinator.

More plans are in the works, Tolley said, such as the return of SLO Safe Ride, a late-night transportation service not subject to the city’s taxi licensing requirements. According to the report, business owners contend the city’s limited taxi service contributes to many late-night problems.

Other strategies planned by the SNA include a “Downtown Cleanup,” which would be funded by the association, as well as requiring their employees to attend ABC education training and improving communication between establishments.

But the relationship between the city and the SNA may not be as buddy-buddy as it seems. A number of strategies recommended in the July 2011 report—and seconded by the SNA—were ignored by the council.

For example, the report suggested providing and promoting public restroom facilities at night, such as the mobile variety currently offered at the SLO Farmers Market. Public urination and vomiting became one of the major concerns of nearby residents and business owners. The SNA identified more public restrooms as its second priority, according to the report.

Another proposal to create a “flex zone” where street-side parking spaces could be used as additional pedestrian areas, preventing a clogging of foot-traffic in certain highly congested areas, was also shot down.

The city also ignored the recommendation for a nightlife economic impact study, which some have called for since the October 2009 report, to assess the value of these businesses to the local economy.

However, the city rejected a recommendation to levy fees on alcohol outlets to recoup costs for increased enforcement, something business owners told New Times would be unfair. In 2010, voters passed Proposition 26, which prohibited city governments from imposing additional fees simply to recoup costs for enforcing existing laws.

There are currently 20 bars in the downtown area, and the majority do not have conditional use permits. City officials are unsure what impact the new requirements will have on their capacity for enforcement, but plan to have the new regulations in place by the end of 2012.