It’s Wednesday, Sept. 21, which might not mean much to most people, but to New Times Managing Editor Ashley Schwellenbach, it’s Bill Murray’s 61st birthday, the best damn day forever. Schwellenbach likes to celebrate with formal wear and a mad dash into the sea at sunset. 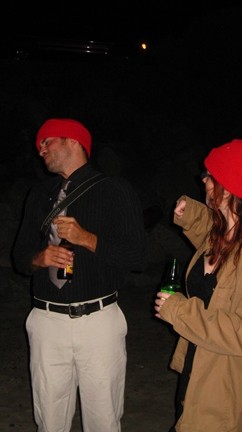 “It’s purposeless and whimsical,” she says, “and I think Bill would appreciate it.”

Among the partiers is Dane Sensor, a man who had been homeless and unemployed for three years before our little paper swooped in with the Homeless Project.

It only took three weeks for the project to provide results, but that’s the “naïve and irresponsible” New Times for you.

Ben and Erika Funston-Timms are also celebrating all things Murray, which isn’t surprising, considering that (for the sake of this article) they owe their happy marriage to the man. Ben was born on Groundhog Day and has developed a tradition of watching Murray’s titular movie every year.

The aquatic activities are scheduled for 8 p.m., and as the hour approaches, the partiers around the fire grow nervous.

“I suppose if I stood too close and caught on fire,” Jessamyn Lynn Pattison says, “I’d have to run in.”

“We’ve got a ton of lighter fluid here, and it would make an awesome photo,” I say, pushing her violently (not really).

Schwellenbach cuts us off with a toast to Murray, and with that, about a dozen of us swig our drinks and run full bore into the cold sea.

It’s chaotic, dark, and splashy. Most of my attempts to capture the madness fail miserably. Also, I forgot that my notepad was in my back pocket, so that’s probably ruined. I’m afraid I’ve let my dear Glen down.

Schwellenbach tries to escape and head back to shore, but New Times News Editor Colin Rigley and Geek Out columnist Nick Walter pick her up for a full dunk. The whole thing is surprisingly fun in a childish sort of way, but we’re all wet and sandy. It’s time to head back to the fire for warmth and more drinks.

When Matt Fountain removes his shirt to dry, I know the cold is worthwhile. The vision is breathtaking.

“Did you get those tattoos in the Navy?” asks Kathy Johnston.

“No,” says Fountain. “But my dad was a marine biologist.”

Then, with an angelic chorus and a radiant glow, the figure of Glen Starkey materializes amongst us. It’s time for me to step aside and let a true master work:

Thank the lord almighty for Nick Powell. Since I had to teach at Cal Poly until 8 p.m., it’s about 8:30 when I get to the beach and see a pack of shivering, wet souls surrounding a meager fire. Festooned in their red watch caps, clutching drinks, one guy gamely roasting two marshmallows—er, make that one—over the fire, it’s clear I’ve missed all the excitement.

I manage to snap a few highly unflattering photos, chat up Dane Sensor, who tells me the exact same story he told Nick, and get Jessamyn to write her name in my notebook because no one knows how to spell and can barely pronounce Jessamyn. I drink someone’s beer, load up my stuff, take one more look around for a Bill Murray sighting (alas, none), and head home.