Judges and juries—not police officers or state hospital orderlies—make the decision whether or not a defendant’s mental disorder excuses the crime that person committed. Until their day in court, the system treats the mentally ill, even those with extensive violent records, like anyone else suspected of the same crime. 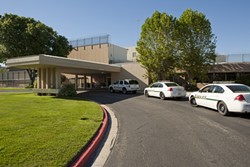 They go to jail.

But it turns out jail may not be the best place for forensically committed state hospital patients. Recently, officials have been raising the point that violent mental patients require a level of care a small local jail shouldn’t be expected to provide. When the jail fails to deliver that care, the consequences can prove devastating for the patients as well as other inmates.

One county that deals with this problem wants the Legislature to require state hospitals to keep holding facilities on site to detain patient-offenders. Napa County analyst Liz Habkirk argues that it’s unrealistic to expect a small sheriff’s department to carry such a burden.

“That’s like asking us to run a cardiac ward in the jail,” Habkirk explained. “That’s how specialized these services are.”

Napa County discovered a sponsor in a Central Coast legislator who came to the issue from a totally different perspective.

Assemblyman Katcho Achadjian (R-SLO) introduced Assembly Bill 1340 to committee on March 14. The draft legislation would require state hospitals to build “enhanced treatment units” to detain mentally ill assailants. It also calls for the automatic and timely referral of the incident report to the local district attorney. According to his staff, Achadjian introduced the bill after learning of the problem from the union that represents state hospital workers.

Coby Pizzotti of the California Association of Psychiatric Technicians said his organization proposed the bill to improve hospital worker safety. After passing through the jail, charged patients come back to the same ward worse than ever. Almost all of the state hospital patients charged with serious assaults while in treatment ended up at the state hospital after committing a crime in the first place.

“We’re talking about people behind the fence,” Pizzotti said. “It’s kind of a vicious cycle. The staff get beat up routinely by the same person.”

As of press time, the bill had just begun to work its way through committee. Proponents expect that the challenges facing the bill lie at the fiscal impact stage of committee review. The measure will cost the state a still-unknown sum in upgraded facilities, and there’s the rub.

The Department of State Hospitals chose not to take a position on the draft bill at this time. Spokesman Ralph Montano declined to answer New Times’ questions about the fiscal impact of requiring state hospitals to maintain holding facilities.

“Safety of our patients and employees is one of our top priorities,” Montano said. “We will continue to work with the sponsors of the bill as it moves forward.”

Nevertheless, Atascadero State Hospital recently piloted a special unit to house its sickest patients and managed to do it within its current budget. Pizzotti thinks the state hospital system could find a way to implement the enhanced treatment units for patient-offenders.

“Whether they think they can or not, they did,” he said.

A report adopted as part of Napa County’s legislative platform outlines the corresponding human cost. A relatively large number of mentally ill suspects ended up spending weeks or months in the Napa jail because of court delays. Across the board, these suspects spent an average of 62.2 days in jail after booking. Bereft of proper treatment for two months, a mental patient can cause a great deal of damage.

The Napa report recounts a few particularly gruesome incidents in graphic detail. The report tells of one patient who tried to self-immolate by wrapping himself in toilet paper and lighting it on fire. Another patient repeatedly smeared feces on the window of his cell to prevent correctional officers from monitoring him. Yet another opened a wound in her abdomen deep enough to fit her hand past her wrist.

San Luis Obispo County, like Napa, contains a large state hospital and a relatively small jail. SLO County Undersheriff Tim Olivas said 142 Atascadero State Hospital inmates passed through the jail on new charges over the course of 11 months. He mentioned one state hospital patient who used a stashed safety razor to cut the neck of a correctional deputy who tried to extract the man from his cell.

The component of the bill requiring the quick referral of assault complaints to local prosecutors aims specifically to reduce the amount of time state hospital patients spend in holding. Napa County’s figures show that only 39 percent of assaults involving mentally ill suspects led to a sentence, and less than half of those sentences came down with the offender still in county custody.

In one out of 10 cases, the district attorney simply declined to prosecute the complaint—which is hardly surprising since the courts already found most of these assailants incompetent to stand trial.

“It’s a catch 22 to charge them with a crime, when they’re already at the hospital trying to get competent, and then to try and bring them through the system again,” Olivas said.