Don't toss the turkey: These recipes are easily made using Thanksgiving leftovers 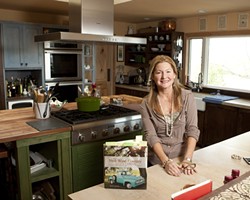 For most American families, it’s traditional to watch Dad carve the turkey at the Thanksgiving table. But the kudos really go to our Moms for taking on the detailed tasks required to create that very special, nurturing meal. That thought motivated me to turn to professional women to request recipes that use up the leftovers behind the great American feast. When it comes to me, after the cold turkey sammies, the hot turkey sammies, and the ubiquitous turkey pot pie, I’m so done with the bird. But I’m sure these delicious recipes from a local chef and two authors will help me forget I’m still eating turkey. Now, I know I won’t be tossing the roast turkey remains into the garbage can.

Author Brigit Binns, who featured California’s Central Coast in her New Wine Country Cookbook, offered a tasty turkey Cobb salad that’s made in only 10 minutes. The author has published 28 cookbooks, including Williams-Sonoma’s salad series in which this recipe was first published.

“I lived in England in the mid-’80s through mid-’90s. I had a thing about Thanksgiving and wanted to introduce the English to turkey,” she remembered. “I made turkey Tetrazzini (an egg noodle dish with poultry, mushrooms, perhaps some veggies, in a creamy parmesan sauce that’s great for using up leftovers), but I couldn’t get the English to eat it.”

“Like my mother, I have a fear of waste so I was powerfully motivated to find something simple, quick, and delicious that would make them appreciate turkey. I created this recipe for Williams-Sonoma’s cookbook, Salads.” Binns is currently working on a new book project with Sunset magazine. “Chilling salad plates is traditional at some of America’s best steakhouses,” Binns noted. “Aficionados of the perfect Cobb even chill the forks!”

Place four large shallow bowls or plates in the refrigerator to chill. In a large mixing bowl, combine the vinegar, salt, a generous grinding of pepper, mustard, Worcestershire, mayonnaise, and olive oil. Whisk until smooth and then stir in a quarter of the crumbled blue cheese. Now add the iceberg and onion, toss well to coat evenly and taste to adjust seasoning. Divide salad among the chilled bowls and arrange the avocado, tomato, and turkey on top. Scatter each bowl with the bacon and the remaining blue cheese, and  serve at once.

Winemaker, cook, and author, Lisa Pretty just released the second edition of her cookbook, Eat This with Paso Robles Wine, that’s filled with food and wine pairing recipes. And there are plenty of photos that prove why Paso Robles was named “2013 Wine Region of the Year”  by Wine Enthusiast Magazine.

“If you find yourself with a lot of leftover turkey after Thanksgiving, turkey pot pies are the perfect way to use up the last of the bird,” Pretty explained. “The ultimate in comfort food, I have a friend who bought and cooked a whole turkey just so I would make a large batch of pot pies for him to freeze and have available for an easy dinner. My dad used to count the number of pies to make sure he had his fair share each year—he frowned upon giving them away to friends.”

In a large pan, heat butter and olive oil. Sauté mushrooms, carrots, celery, onions, and sage for five minutes. Add brandy and simmer for 10 minutes, add turkey and simmer five minutes more. Pour in heavy cream and stir continuously until all ingredients are coated and warmed through, season with salt and parsley. Use this pie filling in your favorite pastry: either pre-cooked pastry shells, a casserole dish topped with puff pastry and baked until golden, or in mini pie dishes with homemade pastry on the top and bottom, baked until golden.

When I asked Seaside Café chef Liz Lynch to provide a recipe, she offered this explanation: “Being from a big family with a Greek background, any holiday, or any meal was huge. There were always leftovers! Thanksgiving is one of those meals that can be the simplest traditional dishes to whatever gourmet spin you put on it.  Either way, what do you do with the leftovers the next day? For breakfast you can turn the cranberry sauce into stuffed cranberry and cream cheese French toast. You can also turn all the fixings into a really delicious quiche or frittata.”

Mix all of the ingredients together. Pour mixture into a Pyrex dish that’s well-greased and bake at 350 F for about 40 minutes.

I recommend mixing the eggs and milk then adding the other ingredients in amounts that suit your preference. Bon appetit!