DON'T WORRY, HE WON'T GET FAR ON FOOT

Auteur Gus Van Sant (My Own Private Idaho, To Die For, Good Will Hunting, Elephant, Paranoid Park, Milk) helms this biopic based on subversive cartoonist John Callahan's quasi-autobiography (Will the Real John Callahan Please Stand Up?), with Joaquin Phoenix starring as Callahan. (114 min.)

Glen Essentially, this film (and the book upon which it's based) is a love letter to Alcoholics Anonymous and its 12-step program as well as the misfit alcoholics who work the program and rediscover their self-worth. There's certainly plenty of criticism of AA and its one-size-fits-all approach to managing alcoholism, but Don't Worry isn't the least bit interested in either exploring or countering those criticisms. Instead, it chronicles one man's journey through the 12 steps as he works to overcome his dependence. If you're not familiar with Callahan's life and his cartoons, the basics are he became a quadriplegic after a drunken car accident, eventually drawing his politically incorrect, charming but clumsily hewn cartoons, first published in the Portland State University paper and later in the alternative paper the Willamette Week, and eventually gained critical praise for his controversial work. He died in 2010, 27 years after his 1983 accident due to complications of quadriplegia and respiratory problems. This film is less about the controversial nature of his work, although that's certainly examined, and more about finding sobriety. He gains a foothold on his sanity thanks to his AA sponsor, Donnie (Jonah Hill at his most charismatic), and girlfriend, Annu (Mara Rooney), but the film is also populated by members of his AA group, including overweight Reba (Beth Ditto), misogynist Mike (Mark Webber), gay Martindale (Ronnie Adrian), bored suburbanite Corky (former Sonic Youth member Kim Gordon), and effete European Hans (Udo Kier). Each member represents a strong personality, though they're a little cliché. They're also tough-lovers, not letting Callahan get away with feeling sorry for himself. It's a pretty remarkable, thoroughly engaging film. Chalk this up as another great one by Van Sant.

Anna I'm a fan of this director. He's got a pretty interesting style and is drawn to stories where the meat resides in the minutiae, and out-of-the-box characters live in a world where they don't quite fit in. I know those personally who have found sobriety through AA, and those for whom the program was not the tool they needed for that task. I won't pretend to have any sort of insider knowledge as to the methodology; my general sense of the program comes mostly from media and personal anecdotes heard therein. While the bulk of this film does seem to center on Callahan's struggles and journey to sobriety, it also opens the curtain on the man before both his crash and AA, and on a lesser note his rise after. He's a flawed man, irreverent and funny, yet prone to bouts of anger and depression. After his accident, he's not much more than a sad shell—still drinking, self-hating, and lost as to what to do. He wasn't a cartoonist before the crash. He got by painting enough houses to support his booze and cigarette addiction, but mostly he was a rambling drunk who just knew the next party was going to have hotter babes and more to drink, so off he went. Phoenix does a great job in the role, but it's his co-stars that really help the movie shine. I didn't even recognize Jonah Hill in the first shot he was in, and his character Donnie proved just as meaty and heartbreaking as Callahan himself. The film may feel like it's moving at a slow plod sometimes, but the weave of the story comes to a resonant and satisfying payoff in the end.

Glen I thought Hill was incredible, but for me there's no denying Phoenix's genius. He's such an amazing actor who disappears into his roles. Setting aside his cockamamie 2010 stunt when he pretended to quit acting to become a hip-hop artist, chronicled in the mockumentary I'm Still Here, Phoenix has made so many incredible films, and many of his choices—like the one to play Callahan—seem more like personal artistic decisions rather than commercial ones. After a bunch of early TV guest roles and some forgettable kid flicks like SpaceCamp (1986) and Russkies (1987), Phoenix teamed with Van Sant on To Die For (1995), where he got his first taste of real acting for a visionary director. Since then he's mixed smaller, artsy pictures with bigger roles. He's made some amazing films! For every Gladiator (2000) and Walk the Line (2005) there are films such as You Were Never Really Here (2017), Inherent Vice (2014), Her (2013), The Master (2012), Two Lovers (2008), Reservation Road (2007), We Own the Night (2007), Hotel Rwanda (2004), and The Yards (2000). He's one of the best actors of his generation, and in Don't Worry he offers a deeply human portrayal of a deeply flawed character. Don't Worry is a triumph of the human spirit, a film about how humor can heal; how relationships are essential; and, even in the face of insurmountable odds, how a vulnerable person can persevere. As a biopic of John Callahan, it gives a very real, warts-and-all look inside a very polarizing artist. Yes, Callahan had a lot of fans, but he had a lot of very vocal critics who found his work insensitive or worse. Callahan didn't care, which is one more reason to admire him and his work. 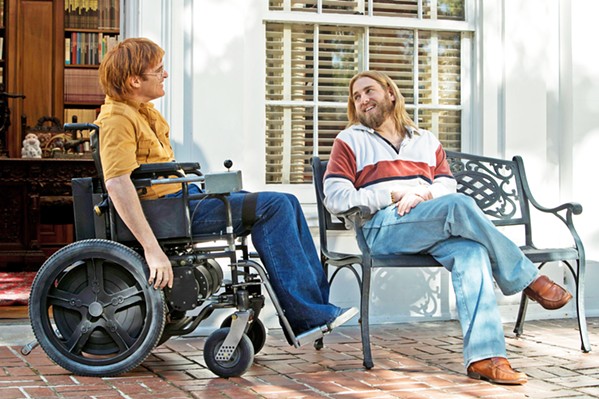 Anna I agree, Phoenix is an incredible actor, so much so that I probably take it for granted that he's going to be phenomenal in any role he takes. He can play what on the surface is an unlikeable character in such a relatable and endearing way that I'm won over, and Callahan fits that bill somewhat too. He's difficult and a drunk, he asserts himself into places he's not necessarily wanted, and he resists being told what to do and how to do it. I find Callahan's cartoons to be pretty funny in that good ol' blue humor way, but I wouldn't necessarily pass them around the Thanksgiving table to grandma, if you catch my drift. This is a real man's story, and as such, the messiness of real life bubbles to the surface in ways that fiction has a hard time replicating. I for one think this cast did a talented man true justice in telling his story, and I'm grateful for the reminder to look up Callahan's cartoon catalog whenever I'm in need of a chuckle. Δ