It’s brown. It’s stinky. It’s warm. It’s mushy. And nobody likes to clean it up.

Let’s face it: Your dog’s excretion is something you’d rather not deal with on a regular basis, and in the busyness of life, you’ve probably found yourself wishing there was someone who could just handle it for you. 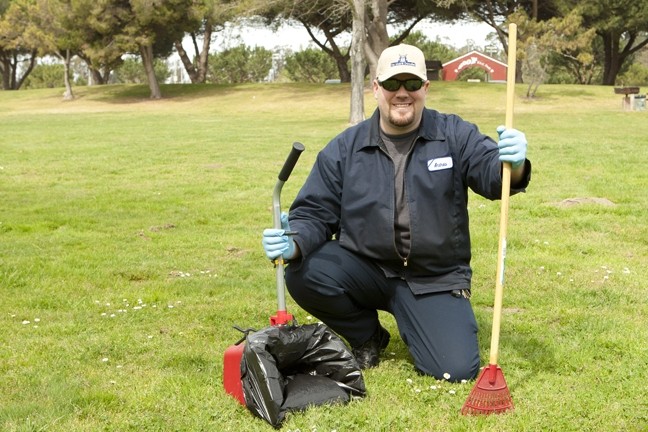 Andrew Greaves moved to Santa Maria from Connecticut two years ago with his wife and baby daughter in search of work. After completing his service in the Marine Corps a few years ago, he’s now taken on a whole new kind of duty in San Luis Obispo County.

Greaves works as a city transit worker when he’s not enjoying the outdoors on a hike. After a year of looking for higher paying jobs to support his family, he decided to start No More Doodie, a dog-waste pickup service that will come to your home and purge it of all your dog’s droppings. “With today’s economy, the opportunities hadn’t been here the way I thought they would, so I decided to create my own,” he explained.

A real go-getter, Greaves decided to make something happen for himself and rather than starting a service that already exists in the area, he thought outside the box—way out of the box. “When you start a business, they say, ‘Find something people want and give it to them,’” he said. “So I looked for something that people don’t want. And that’s, well, you know, poop.”

Greaves has been serving residences in SLO County since last November and is seeking to expand his service to homeowners’ associations, apartment complexes, dog parks, and other commercial properties.

Equipped with his specialized tools and cleaning supplies, Greaves can be seen coming down the street to your doorstep in his pale-green colored truck. With the owner’s permission, he even brings healthy dog treats to make friends with your dog and ensure a problem-free cleanup.

After the job is done, Greaves prides himself in meticulously cleaning and sanitizing every tool that came near the grass: boots, buckets, rakes, everything—all to ensure that your house is left bacteria-free.

With 20 million e-coli cells in every gram of dog poop, cleanup and sanitization are extremely important in preventing parvovirus, a disease that predominantly affects dogs and proves to be fatal 80 percent of the time with puppies.

For the pick-up-yourselfers back at home, Greaves suggests properly disposing of your dog’s waste in a tied-off bag in the trash on a regular basis. “[Doodie] doesn’t compost; the compost doesn’t get hot enough to kill the pathogens in it,” he explained. “It can’t be used productively; it has to be disposed of.”

Letting your dog’s waste sit on the lawn as you wait for it to decay or rain to wash it down a creek or gutter can also be harmful to the environment. “The rain runs it off into the sewers and it goes right back into the ocean and sometimes into places where it won’t get sanitized first,” Greaves said.

He’s also preparing for National Scoop-the-Poop Week, an event put on by the Associations of Professional Animal Waste Specialists (aPaws) that starts April 1. The event aims to educate people on the importance of picking up after their pets in an environmentally friendly way, whether they do it themselves or hire a service.

From what Greaves has seen, the whole notion of “the bigger the dog, the bigger the doodie” holds true, but no duty is too large or too small for him to handle. As you can probably tell, the puns in his line of work are limited only by your imagination.

The biggest challenge Greaves said he faces is raising awareness that such a unique service exists. Similar services exist in other parts of the country and even the state, but none he’s aware of—besides his own—in the SLO County area. For parents who somehow find themselves doing the dirty duty that their beloved children pinky-promised to take care of in order to get the pet in the first place, there is solace for you.

No More Doodie is available Monday through Friday from 7 a.m. to 5 p.m. to service your home, business, or park. For more information or to schedule a consultation, check out nomoredoodie.com or call 720-9700.