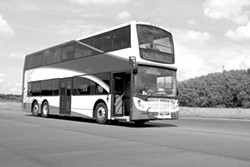 Can eccentric teeth be far behind? An $850,000 British-style double-decker bus is headed for the bus routes of SLO (or some of them anyway, since the bus won’t be able to fit under at least one of the city’s railroad bridges).

The SLO City Council on April 21 approved using a combination of state bond funds and federal grants to purchase the double-decker, a type of bus perhaps better known for novelty tours that is increasingly being deployed in public transit systems.

City staff argue the bus, which can seat 84 passengers and carry still more who stand, will be just the ticket for some of the city bus routes, such as Routes 4 and 5 that serve the Cal Poly campus. Those routes are routinely so full in the morning they leave folks waiting at the stops.

Council members agreed, passing it unanimously with no discussion.

City transit officials say the double-decker will reduce or eliminate the practice of leaving stranded passengers during peak hours and could save on the cost of hiring drivers, because there won’t be a need for an extra bus to pick up passengers. When it’s full, they say, it will run at low per-passenger fuel costs.

Double-decker buses are part of the transit systems in London and Hong Kong and run on the strip in Las Vegas. In California, Davis runs some and San Francisco is considering adding some to its public transit fleet.

Elsewhere, they’ve lost out to accordion-style articulated buses, even though those typically seat fewer passengers.

Alexander Dennis Limited loaned San Luis Obispo one of the buses in November. It ran on SLO Transit Route 4. According to the staff report, “it received extremely positive comments from passengers and staff during this trial period.”

The $850,000 price tag, which includes sales tax and various extras, doesn’t count the extra $15,000 city transit managers estimate it will cost to retrofit facility doors; they’re too short to fit the 14-foot-tall buses.

There is one potential literal hang-up: According to Transit Manager John Webster, the bus’s height will mean that it won’t be able to run on at least one route, 6a, which includes a railroad bridge lower than the bus’s roof.

Elsewhere, double-deckers have drawn criticism because they can take longer to load and unload and whenever they do run with few passengers, their per-passenger costs are high. 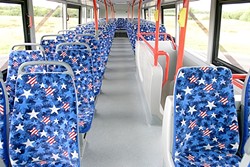 Webster said the city’s bids showed that the cost of the double-decker is roughly double the cost of two regular diesel buses, but less than two hybrid buses.

Stephen Walsh, vice president of Alexander Dennis Limited, said that because of engineering advances, they’re more stable than regular buses in turns, and easy to learn to drive.

He also says it could save fuel, assuming it runs full.

“We probably have one of the lowest fuel consumption of any bus in North America,” Walsh said in an interview. “We’re moving 83 people and 17 standees, for only just a little more fuel than a standard 43-foot bus.”

Walsh said SLO’s bus will be made in California, under an agreement with an existing bus manufacturer. Despite the bad economy, he said the company is seeing sales of double-deckers increase.

In some places, including Las Vegas, the sheer novelty factor has led to increased ridership of the double-deckers as compared to the regular public transit buses.

At the same time it approved the double-decker, the council also approved using federal stimulus money to make permanent a pilot program that allows people to track the whereabouts of specific buses and, potentially, give alerts when one is running behind schedule.

That would cost $405,000. Another project, to improve and expand electronic fare boxes, would cost another $400,000, with the funds coming from the American Recovery and Reinvestment Act.

According to the staff report, all of the funds for the double-decker and transit improvements would come from federal and state grants, with no city dollars required.

The city plans to replace four buses that have been in operation since 1997 that are nearing the end of their useful life. One goal in the replacements is to meet emission reductions required by the state, so the city is considering alterative fuel vehicles including a compressed-natural-gas bus, a diesel-hybrid, and an electric model. Or, the city may purchase a second double-deck bus.