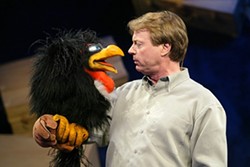 Now one of America’s foremost ventriloquists, Jay Johnson began performing at the age of 11, after discovering an uncanny ability to make his cousin’s doll come to life. Johnson went on to produce and star in his own local television show while in high school, before heading to L.A., getting a bowl cut, and making a name for himself as the schizophrenic duo Chuck and Bob on the hit ’70s sitcom Soap.

Johnson has since “converted generations of ‘ventriloquist avoiders,’” as press materials put it, creating such sidekicks as snarky, back-talking monkey Darwin. Johnson’s 2007 Broadway show Jay Johnson: The Two and Only! garnered him the American Theatre Wing Tony Award for “Best Special Theatrical Event.” By special limited touring engagement, the acclaimed one-man show (or two-man show, his dummy would interject) comes to the Central Coast. See The Two and Only! on Oct. 23, at 8 p.m., in the Alex and Faye Spanos Theatre.

The Two and Only! intertwines the “dark history of ventriloquism” with tales from Johnson’s own past as a shy Texas boy who found a weird obsession and turned it into a lifelong artistic pursuit.

What does Johnson hope will bring “ventriloquist avoiders” to his show? “Well, the fact that a ventriloquist artist has made it to Broadway; I’d be curious to see why,” Johnson said on NBC’s Today Show, flanked by well-dressed, outspoken dummy Bob.

“When you see the show, you’ll understand. It’s more than [ventriloquism]. It’s about art, and it’s about finding your passion, finding your voice, and the story of how we found ours.” At this piece of poignancy, Bob nodded vigorously, eyes wide, a maddening perma-smile splitting his plastic little face.