On Jan. 19, Gala Pride and Diversity Center was set to have its routine board meeting with an agenda item that included a question-and-answer segment with SLO County District Attorney Dan Dow intended to openly address their concerns regarding his appearance on certain radio shows and his comments on the topic of religion. 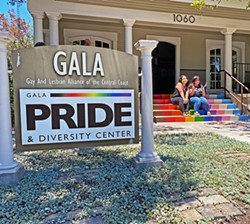 However, an unusually large number of people planned to attend the meeting, which prompted Dow to decline Gala's invitation and offer the board a private meeting where they could address their concerns. Gala released a statement on the change prior to the Jan. 19 meeting, stating that when Dow accepted the invitation to attend, the board indicated that although its meetings are public, they are generally attended by the board and about five other people.

"Now that it seems like a large number of people are attending, including the press, District Attorney Dow has declined to attend. Instead, the District Attorney's Office offered a private meeting with board members to address our concerns. We hope that genuine discussion may be facilitated in this way, and we welcome the opportunity to sit down with the district attorney. However, the board believes that the questions asked are in the public interest and intends to relay the salient points once this private meeting has taken place," the statement read.

Assistant District Attorney Eric Dobroth emailed a statement to New Times, saying that Dow and the District Attorney's Office are committed to engaging in ongoing communication with the LGBTQ-plus community and ensuring they receive swift, unbiased justice and equal protection under the law.

"We are dedicated to aggressively prosecuting hate crimes and assuring LGBTQ-plus victims receive all available resources through our Victim Witness Assistance Center," the statement read. "Last night's meeting with Gala's Board was not canceled but postponed. As this is not the end, but only the beginning of conversation with Gala. We feel a more intimate setting with the board to address concerns and envision solutions will produce a more genuine conversation. A larger forum would be happily welcomed after that conversation begins."

Dobroth said that the District Attorney's Office is available to meet with anyone interested in discussing criminal justice issues in the county. To schedule a meeting, constituents can reach out to Dobroth at (805) 781-5819.

Gala Executive Director Michelle Call said the board had questions about Dow's Aug. 11, 2020, appearance on Washington Watch with Tony Perkins. The Southern Poverty Law Center states that Perkins is president of the Family Research Council, an anti-LGBTQ hate group based in Washington, D.C.

Those questions included asking Dow about his views on LGBTQ-plus rights; how his religious beliefs affect his actions as the county's district attorney; how atheists or people of no faith can expect to be treated; and whether Dow believes same-sex sexual activity or gender non-conformity to be sinful and, if so, how it informs his decisions as a prosecutor.

Call said the board also had concerns about comments that Dow made on local radio host Dave Congalton's Jan. 6 Hometown Radio show. Dow and Congalton discussed a SLO Superior Court judge's decision to recuse the entire District Attorney's office from prosecuting the multi-codefendant case against July 21 protesters and Dow's declaration that SLO County is a "sanctuary county" for church and worship.

On the show, Dow said that he's an advocate for law and order, as the district attorney and a judge must remain neutral. He said that the fundraising email Judge Matthew Guerrero referred to as evidence of a "clear conflict of interest" to remove Dow's office from the protesters case is indicative of a broader movement.

"What I believe is happening is the underpinnings of our criminal justice system, law and order system, being torn apart and dismantled by people with some very extreme agendas," Dow told listeners. "It's OK for me to say that as a district attorney. I run to represent the people in our community and enforce the law the way the majority of people in our community want it enforced." Δ