Down the drain: Why can't SLO get the I Madonnari Festival right? 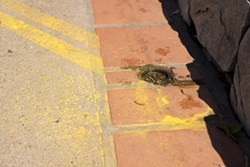 They braved two days of 80-degree-plus weather, wore their fingertips raw on the asphalt, and attracted thousands of wide-eyed onlookers to marvel at the fruits of their labor and talent. As far as everyone was concerned, this year’s chalk art event was a success in San Luis Obispo.

But as the last of the artists laid the finishing touches on their masterpieces, the cleanup trucks were waiting to douse and scrub the streets clean. Within an hour of the last picture’s completion, the thoroughfare resembled the blank canvas it had been just two days prior. All that remained was wet pavement and streams of multicolored chalk in the gutters and circling around the caps of storm drains.

Considering the annual event draws residents from all over the county to Mission Plaza, many people were left scratching their heads as to why the city would seemingly disregard an attraction that could bring additional foot traffic to the downtown area when summer vacation is still technically winding down. And don’t forget all the hard work that goes into it.

To say the hose-down left a sour pall lingering over an otherwise colorful event would be an understatement.

Grover Beach resident Katy McGrath, an I Madonnari artist for the last 16 years, told New Times that when she wrapped up work on her piece and departed at about 5:30 p.m., there were still about 100 people walking the plaza and checking out the artwork.

“I worked about 14 hours on my piece and was really disappointed to find out they washed the streets down not three hours after I finished. I thought they left them until at least nightfall,” she wrote to New Times. “I have always wondered why they don’t leave the street closed on Monday as well, so people who were out of town or school classes could still see the artwork on a weekday.”

She—like others who spoke with New Times—felt the city could have gone just one more day with the street closed, especially in an area with so many alternate routes.

Morro Bay resident Jim Davis and his wife checked out the festival over the weekend, and later said they were “amazed” at the designs and sense of community the event brought.

“But sometime during our two-day visit we overheard someone remark that the city washes away the all of the creations just after the event closes down on Sunday afternoon,” Davis said. “It would be great if the art could linger just one more day, allowing visitors to enjoy these cool creations for a bit longer. After all, it’s only chalk.”

Resident Jennifer Harmon wasn’t able to watch the creative process over the weekend, with the exception of a quick glimpse on Saturday morning. Like many locals, she had to work. By the time she was able to walk the plaza and check out the finished product, just before dark on Sunday, it was washed away.

“I think the whole cleanup is unnecessary and a waste of city money,” Harmon told New Times. “I would love it if nature could take care of it. If not, give us at least Monday for the locals to check out the artwork without as big a crowd.”

The popular chalk-on-street festival attracts artists from around the world and has made the stop in SLO for nearly two decades. Other cities, such as Santa Barbara, leave the art for days, even weeks, following the event. According to Santa Barbara Parks and Recreation Director of Facilities and Special Events Susan Jang-Bardick, the difference is that their event takes place on private property, and the owner has the discretion over if and when to clean it up. SLO’s Mission Plaza is city-owned, and used for a variety of events.

As it turns out, this year’s art wasn’t supposed to be cleaned up until Monday—6 a.m. on Monday, according to SLO City Parks and Recreation Director Shelly Stanwyck. But somewhere along the way, something went wrong.

To perform the cleanup, the city’s public works department contracts a mini-street sweeper-like vehicle to come in and spray and scrub-wash the streets in a manner that captures the water so as to not create a chalky runoff that will inevitably end up in the creek.

Stanwyck explained that because the event takes place on city property and is located near the creek, the city is bound by the Clean Water Act and regulations by the Regional Water Quality Control Board, which require that the city clean the streets and plaza within a day or so of the event. She said the city’s past practice has been to allow the art to stay for “a short time” to allow for public viewing while complying with state and federal regulations.

In response to a request for comment, Stanwyck provided New Times with an e-mail she’d previously sent to a resident who complained to city staff. In that e-mail, she explained that the cleaning this year was slated for the following morning due to the scheduling of the annual Blue Mass, a service dedicated to fallen police officers. The plaza had to be clean by 9 a.m.

“Parks and Recreation and Public Works staff worked together closely this year to permit this event for its use of Mission Plaza and city streets,” she explained. “We understood the cleaning was to occur on Monday morning at 6:00 a.m. Unfortunately, it did not.”

In planning for next year’s event, she wrote, staff has already discussed trying to have the artwork remain a few days following the event—absent any conflicting events in the plaza—so the public can enjoy the temporary art installation.

Stanwyck later told New Times that the city hasn’t yet received applications from either the Downtown Association or I Madonnari for next year, so it’s too early to say if there will be any conflict.

“That said, we always try and work with our major event promoters to minimize conflicts in date and use of this well-used facility,” she said. “In the fall it is always a challenge as so many groups want to have events in the plaza at that time. The Blue Mass, I believe, has varied in its dates and may be dependent upon the Bishop’s schedule for the Diocese.”

This isn’t the first time festival organizers and participants have been irked by the city’s handling of the event. In 2012, organizers said they were weighing whether or not to bring the event back again after a sprinkler snafu ruined a few pieces of art during the first night, and a banner advertising the event over the plaza was prematurely taken down, among other various mishaps.

I Madonnari organizer Randy Dettmer told New Times that bad experience led the city to waive the event’s $1,200 permit fee for this year.

Despite the city’s stated understanding of this year’s cleanup schedule, he had a different one, expecting the sweepers to arrive Sunday night at 7 p.m. They arrived at 6:30, he said, and had to be told to hold off for 30 minutes.

“In reality, the whole thing about the paintings going away is part of the fleeting character [of the event] and part of the art,” Dettmer said. “Though they’re typically left in the plaza a couple days, the city, in its infinite wisdom, wants to clean up as quickly as possible.”

Asked if the event organizers would prefer the art to remain for an extra day, Dettmer said they “absolutely would.”

The cleanup was just one of the problems this year, he added. The last Downtown Association-sponsored Concert in the Plaza event of the summer was also scheduled for that Friday, the day the I Madonnari’s featured artist would usually begin his or her piece at the foot of the mission steps. This year’s double-booking meant the featured artist—flown in from out of the county—had to move the work near the SLO Museum of Art.

“The conflict was the result of the city not paying attention to the calendar,” Dettmer said, adding that a lot of the problems would be resolved if the event could secure a piece of private property downtown to hold the event, though no such move is yet in the works.

“We’ve had issues with the city. One of our options is [to] look for a different location for the event,” he said. “That is going to be explored.”

“As a resident, I absolutely adore being able to walk into town with my family and watch the art come alive throughout the weekend,” Stanwyck told New Times. “As a city staff member, [I] will assist the event in its permitting and coordination of the use of a city facility and hope that we can continue to provide an appropriate venue for them.”