Down the mighty Mississippi: Great American Melodrama presents 'Across the River'

The Great American Melodrama has always had a down-home, old timey feel to it, so when the Oceano theater produces a play set in the frontier times or the American South, it just makes sense. 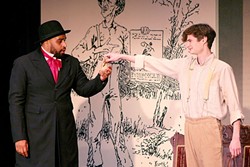 The latest production of Across the River is no exception. The musical by Thom Babbes and Brad Carroll is an adaptation of Mark Twain’s Adventures of Huckleberry Finn, so guests to the Melodrama can expect a friendly greeting from the suspender-wearing title character, played by Cameron Rose, who will hand them a program and maybe even lead them to their seats.

Across the River isn’t told from the point of view of Huck Finn, like the book, but rather the narrator is the escaped slave Jim (Philip Bolton), who opens the play with a heartfelt tune about their unlikely friendship.

Once the story gets going, we learn that Huckleberry Finn and Jim are already on friendly terms. Both are under the thumb of the Widow Douglas, though not quite in the same way. Jim is a slave, of course, and knows not to complain about his position too loudly, whereas Huck hates having to dress up, read, go to church, and do anything else he deems “civilized.”

Huck lives with the Widow Douglas because of the sizable fortune he came upon with Tom Sawyer in the story alluded to in Across the River. The tale has spread up and down the Missouri and Mississippi rivers as well, and the appearance of Huck’s estranged father, Pa (Tim Stewart), is a testament to that.

The abusive and alcoholic Pa tells Huck in plain words that he wants his money. When Huck doesn’t acquiesce, Pa starts beating the boy mercilessly. Jim comes to the rescue and knocks Pa out, and runs away in fear of the repercussions.

A few days later, Jim wanders through the trees of Jackson Island on the nearby Missouri River, only to find Huck! He’s terrified that Huck is a spirit come back to haunt him, but Huck tells Jim of how he faked his own death to escape the suffocating Widow Douglas and his abusive father.

Jim tells Huck how he ran away out of fear of being hanged after striking Huck’s father, and in a similar turn in the book, Huck is conflicted by aiding in Jim’s escape, but does so through a sense of dutiful friendship. The two hop on a raft and head down the river for Cairo, Ill., a free state where Jim hopes to gain passage to the North.

Across the River is filled with great music, from ballads of friendship and wandering, to comical tunes, all accompanied by the expert fingers of music director and pianist Kevin Lawson. Jim and Huck float down the river singing happily, with witty moments of dialogue nearly identical to Twain’s prose. The two bond over their shared superstitions and yearning for freedom, sharing their dreams for the future.

But in true melodramatic style, two suspicious characters appear and con their way into a ride on Huck and Jim’s raft. The shady pair convinces Huck that they are actually uncrowned royalty, a Duke (John Keitel) and a King (Toby Tropper), despite their scruffy appearance and faded carpetbags.

Jim is much more skeptical of the two, but still goes along with Huck’s agreement to help the Duke and King make it to the next town and produce a Shakespearean play. The plan changes, however, when two young women, Mary Jane Wilks (Leah Kolb) and Susan Wilks (Mia Mekjian), assume that the two con men are actually their long lost uncles come to collect the inheritance from their dead father’s estate.

Huck and Jim want to help, but calling on the Sheriff (Tim Stewart) for help is problematic in its own right. The ensemble work of all coming together is hilarious, harmonious, and well choreographed.

The evening always closes with vaudeville at the Great American Melodrama, and the Laughter is the Best Medicine Vaudeville Revue follows Across the River after second intermission. The ensemble cast deals a heavy dose of humor, musical skill, and dance in this one, with great skits, parodies, and more to enjoy.