What is the answer to the ultimate question of life, the universe, and everything? According to the super computer Deep Thought, after seven and a half million years of calculations, it turns out it’s “42”—at least according to Douglas Adams’ The Hitchhiker’s Guide to the Galaxy. (What the ultimate question is, well, that’s another story! Ask Bob Dylan!)

Since Earth Day is celebrating its 42nd year (Was it only 1970 that we actually started to give a crap about Mother Earth? Jeesh!), it seems appropriate to reference Douglas’ jokey science fiction series, which, if nothing else, certainly seems to understand human nature, our need for answers, and our frustrations when they aren’t forthcoming.

My question is, now 42 years in, have we started caring for Earth sufficiently? We have clean air and water acts and recycling programs, we’ve raised awareness—all good things—but is Earth out of peril? I put forth to you that we could do a lot more! 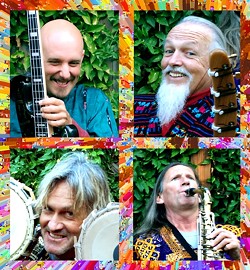 The Great Pacific Garbage Patch, a gyre of marine litter twice the size of Texas, still pollutes the ocean with pelagic plastic, chemical sludge, and other debris. Superfund pollution sites (like the one just south of SLO County in Casmalia) are littered across the United States. The world is awash in Global Climate Change denialists. Despite laws designed to punish gross polluters, fines are mere slaps on the wrists of mega corporations … when they’re applied at all. And people have conniption fits at the mere thought of no longer having the convenience of single-use plastic grocery bags, the exact kind choking fish in the Pacific. Come on, people!

Folks who care more about Earth than corporate profits and consumerist convenience will be heading to El Chorro Regional Park on Sunday, April 22, to share camaraderie with likeminded eco-warriors and to learn more about what regular people like you and me can do to help our home planet. Nearly 100 exhibitors will be there to inform and enlighten, and you’ll see what community groups, businesses, college clubs, and government agencies have to share at the largest free annual environmental event in SLO County from 10 a.m. to 5 p.m. 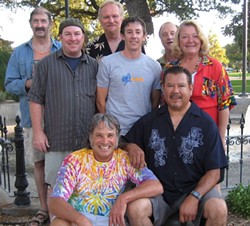 It’s great for kids, with a “green zone” set up for the wee ones and a visit by Sammy the Steelhead Trout. Health- conscious food and beverages plus wine and beer tastings will be available.

“As a major sponsor of Earth Day, Regional Transit Authority (RTA) will provide free bus rides from every corner of the county to downtown SLO all day long. Starting at 10 a.m., the Double Decker bus will leave from the downtown transit center for El Chorro Regional Park on the hour, every hour until 4 p.m. The last Double Decker will leave the park at 4:30 p.m.; other RTA buses will be available until 6 p.m.,” according press materials.

Nine-piece soul act Midnight Express follows, and then long-running socially conscious jam act Up in the Air is on next, bringing its infectious mix of pop, jazz, and rock influenced by Latin, African, Western, and Eastern rhythms.

East Coast piano-based singer-songwriter Brendan James headlines the show. His music has appeared on So You Think You Can Dance, and his first album, The Day is Brave, debuted in the Top 10 Billboard’s Heatseekers chart. He’s toured with the likes of Jason Reeves, John Mayer, Matt White, and Amber Rubarth.

The number 42 isn’t really the answer to the ultimate question of life, the universe, and everything, but Earth Day is a good place to start looking for answers that are.