by Ryah Cooley and Karen Garcia

From writer/director Alexander Payne (Sideways, The Descendants) and co-writer Jim Taylor (Sideways, Jurassic Park III) comes the story of what happens when scientists discover how to shrink humans to 5 inches tall as a solution to overpopulation. Paul (Matt Damon) and his wife, Audrey (Kristen Wiig), decide to abandon their stressed lives in order to get small and move to a new downsized community—a choice that triggers life-changing adventures. (135 min.) 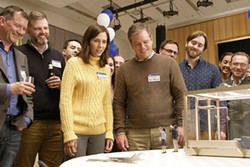 Ryah While Payne and Taylor have shared many a writing credit for a host of films (Sideways, Election, The Descendants, I Now Pronounce You Chuck & Larry, to name a few) and offer up a delightful premise in Downsizing, the plot is half baked, and the film's message somehow comes out of the oven stale and tired. I can picture these two in the writing room saying, "Hey, wouldn't it be cool if doctors could make people super tiny?" And that's about as far as things got brainstorming-wise between then and Downsizing hitting theaters. The movie takes a lot of time setting up the premise to basically establish that our protagonist Paul (Damon) is supposedly stuck in a mediocre life with no hope in sight. He dreamed of being a surgeon but had to settle for being "just" an occupational therapist when his mom got sick and he had to drop out of medical school. Because this is Damon, the film tries to get us to believe that being an occupational therapist is a super blue-collar job that has Paul and his wife, Audrey (Wiig), just barely scraping by, but I'm not buying it. Audrey, who works in retail, is desperate to upgrade to a nicer home that they can't afford. When the couple attends their college reunion, they run into old friends Dave (Jason Sudeikis) and Carol (Maribeth Monroe) who have recently undergone the downsizing procedure and are happier (and richer) than ever! While the moral argument for going small is that it's good for the environment and over-population, the real reason everyone is doing it is because your dollar stretches a lot further when you're living small. Around $40 can buy a few months of groceries or several pieces of diamond jewelry. And those who were barely middle class in the big world can suddenly afford McMansions in small communities like Leisure World. Looking to move on up, Paul and Audrey decide to take the plunge.

Karen This is the kind of film that Payne and Taylor like to create, a mediocre individual trying to find his purpose in life and learning about humanity in the mix of it all. While I get the big picture with Downsizing, the delivery falls short. It's interesting to see the characters try to justify the downsizing procedure with helping the world when in reality it's just selfish motivation. There are puns here and there, giving the audience a chance to chuckle in this mostly serious film. Mild spoiler alert (it's nothing shocking if you saw the trailer): After waking up from his transformation 5 inches tall, a bald, one-eyebrowed (and still big) Audrey cowardly calls Paul from the airport telling him that she could not go through with the procedure. So Paul must venture through this new world alone. Paul has a boring life as a regular-sized human and then continues to have a boring life living small. You can't minimize your problems, Paul! In his apartment building he meets his neighbor Dusan (Christopher Waltz) a European playboy of sorts who throws wild parties filled with vain guests. I'm a huge Waltz fan so seeing that familiar face was exciting, but he only plays a supportive role. Upon waking up from a wild night, Paul sees that one of Dusan's cleaning ladies has an uneven wooden leg. His instinct to help alleviate her pain leads him to discover that she is none other than Ngoc Lan Tran (Hong Chau). Tran is a Vietnamese activist and refugee who was shrunk against her will for creating massive protests in her home country. While it would have been great to learn more about Tran and her backstory, she seems to only exist in this world to help Paul find himself. Tran lives in the barrio of the small world in an apartment building with matchboxed-sized apartments for the lower class. So becoming small doesn't give everyone a second chance. I'm slightly bothered that a majority of the occupants are Latino, but that's neither here nor there. Tran can barely get around to clean homes, but she collects day-old food from her clients to give to her poverty stricken community.

Ryah The decision to make the slums of Leisure World largely Latino was a bit eyebrow raising since filmmakers seemed to take care to make other parts of their world at least some what diverse. I mean hell, there are even black people in the original small colony in Norway, a place that is known for being super white in real life. Tran's accent and mannerisms might offend some, but in articles the actress insisted the role was a tribute to her parents, who are Vietnamese refugees. So make of all that what you will. When Paul tries to fix Tran's prosthetic foot and breaks it, he is forced to help her with her cleaning and Good Samaritan duties. Damon and Chau have a nice buddy cop vibe for this portion of the film, and I wish it could have been explored more. But alas, in Hollywood a man and a woman can only have a romantic relationship, don't you know? Suffice to say the chemistry is lackluster when Damon's and Chau's characters are forced to take things to the next level. I agree with Karen that Waltz turns in a charming performance as per usual. When his character Dusan devises a reason for the whole crew to visit the original small colony in Norway, impending doom sets upon their arrival, and Paul is forced to reckon with how and where to best help and serve humanity. Overall this was a pretty vanilla film, with an even more vanilla message akin to, "Be the change you want to see in the world."

Karen This kind of sci-fi (there are shrink-ray sound effects, people) and dystopian film isn't sharing a tale that hasn't been told before. I agree with Ryah, it's vanilla. "Average Joe" Paul is trying to find his true purpose and figure out how he can give back to his world. But Damon gives a performance as dull as his character. There isn't anything remotely eccentric or quirky about Paul, he's just trudging along until Tran comes in the picture and bosses him around. In the words of neighbor Dusan, Paul is kind pathetic and I say unrelatable. Aren't we the audience supposed to be able to relate to hardworking and down-on-his-luck Paul? We're supposed to root for the protagonist—find yourself, earn success, and in true Hollywood fashion, also find love. I just want Paul to stop whining. The ending, which I won't give away, wasn't satisfying either. Δ