The famous Downtown Farmers’ Market in San Luis Obispo is getting a reboot, just in time for summer.

A rite of passage for fresh-faced college students, the event has long been a parking struggle for those seasoned vets who are just trying to go to dinner. But the Downtown Association is revamping the event, giving people a much bigger reason to come out than just the aroma of roasted corn or pulled pork sandwiches—which are pretty big reasons in themselves.

Dominic Tartaglia, the executive director of the Downtown Association, said they started a periodic review of the event earlier this year, conducting surveys among the vendors or the guests to pinpoint things they could try and improve.

“We really want to make this into a local thing again,” Tartaglia said. “We want residents to come out to the market more. In our survey, a lot of people said that they thought the market wasn’t very local-friendly. We want them to think of it as their market too, and not just a tourist trap.”

That’s right. No longer will you have to fight through the throngs of the slow moving picture-takers, those fanny-pack wearers. No more tourists.

OK, OK, tourists are still allowed to come. But the entertainment value of the market is getting a boost, making up for the people that ooh and aah over the disgusting horror that is Bubblegum Alley. The new Fresh Picked Concert series—which kicked off this April—features a local band each week through September, at the Harvest Stage in front of the Union Bank parking lot on Higuera Street. The next performance will feature the band TROPO on July 9.

“It’s not just about getting produce,” Tartaglia said. “We want to give people the full experience: entertainment and produce shopping.” 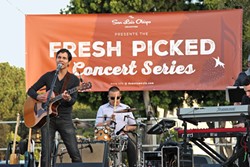 Additionally, there will be new merchandise booths and a weekly recipe made up of produce that can be found at the market.

And, an interactive feature is being added to the market on a monthly basis. Called the STEAM Alley—science, technology, engineering, arts, and math—the new section will offer interactive displays that include robotics, crafts, games, design, and engineering projects for people of all ages.

“We’re rolling out the changes slowly but surely,” Tartaglia said. “We want to make sure we have a strong base and give visitors and residents a good event. Right now, I guess you could say that we’re in the second or even third stage. And since we’ve started, more and more residents have been coming out to the market and bringing their families along. It’s exciting to see the changes.”

For more information about the Farmers’ Market revamp, visit downtownslo.com, or call 541-0286.

The Central Coast Jeep Tour Adventures recently opened in Paso Robles. Enjoy delicious wine as you take a tour of the Paso Robles hills in a six-passenger, open-air Jeep. There are several tours available, such as the classic Paso Robles Wine Tasting tour, the Off-the-Grid Wine tour of exclusively private wine and olive oil producers, as well as custom tours and corporate adventures. The Central Coast Jeep Tour Adventures is at 2210 Villa Lane in Paso Robles. For more information about wine tours, call 296-3165, or visit ccjta.com.