Downtown SLO shuts down for protests

by Karen Garcia and Kasey Bubnash

A number of downtown businesses in SLO closed down and boarded up windows on June 3 in anticipation of coming rallies and protests of police racism.

At the request of city staff, Downtown SLO sent a memo to its member business owners on June 3 notifying them of coming protests. The memo recommended several precautionary measures, including proactive closures and the installation of alarm systems and security cameras. 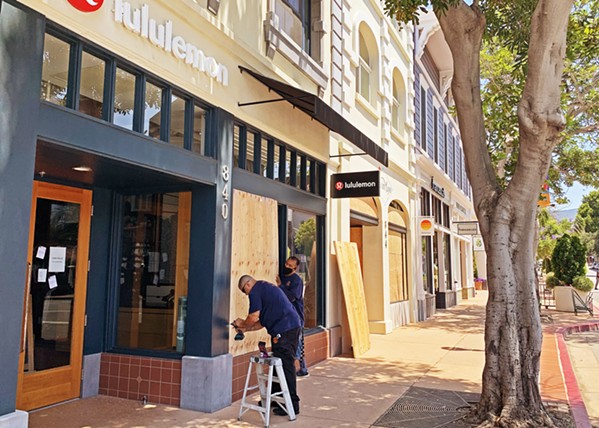 Black Sheep Bar and Grill owner Myriam Olaizola said she can't afford to shrug this off.

"I cannot take a chance of anyone being hurt, any of my employees being hurt, I mean it's just not worth it," Olaizola said.

Black Sheep Bar just reopened its doors for dine-in services, after halting that part of the business due to COVID-19 for two months, but Olaizola said on June 3 she's closing her doors at 2 p.m. and won't reopen until Friday for lunch.

Olaizola and the Black Sheep Bar and Grill family support the protesters and firmly believe in the Black Lives Matter movement.

"It's really sad when these peaceful protesters are being really, completely shadowed by all the extra horrible activity that's been going on," she said.

On the evening of June 1—in an incident police deemed unrelated to the protest—the windows of Central Coast Surfboards, Shoe Palace, and Founders Community Bank were broken by men in a white sedan using a long BB gun.

"This riot thing is killing us. I mean it's just like come on, nobody needs this right now," Olaizola said.

The city isn't expecting or warning of "riots," and expects the protests to remain peaceful, according to city spokesperson James Blatter. But large crowds are expected in downtown SLO in coming days, and, given the acts of vandalism on June 1, Blatter said the city wanted to give advance notice to business owners in the area.

"The city's priority is the safety of our community, and we will continue to protect the First Amendment rights of those wishing to peacefully protest," Blatter wrote in an email to New Times, "but won't tolerate actions of vandalism, unsafe behavior, damaging property, theft, arson or other acts of violence to people or property." Δ