Santa Margarita resident Janice Carter awoke on May 7 to discover that campaign signs on her and her neighbors’ properties on I Street had vanished. The signs supported Eric Michielssen, a candidate running for the 5th District seat on the SLO County Board of Supervisors. Only their wiry, metal frames remained.

“There was mine, two across the street, and two on the street corner,” Carter counted. “When I noticed this in the early morning, I surmised that someone must have hit the stop sign, jumped out [of a vehicle], and ripped out the signs.” 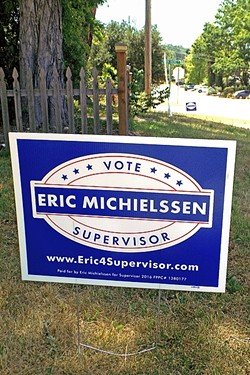 Carter reported the incident to the SLO County Sheriff’s Office later that day.

“I was perturbed and disturbed that someone would’ve come on my property and remove something that belonged to me,” she said.

The incident on I Street didn’t stand alone. That same night, an additional 40 to 50 of Michielssen’s signs went missing from front yards in multiple areas of North County, according to the Michielssen campaign. Signs were taken from properties in Santa Margarita, Garden Farms, and Margarita Farms.

“This was a real financial and emotional hit for this small grass-roots campaign,” Michielssen wrote on his campaign’s Facebook page.

Michielssen and his supporters weren’t the only political group impacted by campaign-related crime on May 7.

Dan Carpenter, a candidate for the 3rd District seat on the Board of Supervisors and a SLO City Council member, had one campaign billboard vandalized twice on Highway 227, near Biddle Ranch Road.

Discovering his sign knocked over on May 7, Carpenter hammered it back into place. On May 8, he found it toppled over again, but this time it was completely dismantled, with its wooden stakes broken in two. He saw evidence of tire marks and possibly parts of the vehicle that he suspects plowed into it. Carpenter decided against re-erecting the sign and reported it to the county Sheriff’s Office.

Respectively, Michielssen and Carpenter are challenging incumbents Debbie Arnold and Adam Hill. Arnold and Hill expressed disappointment for the recent theft and vandalism, but told New Times that their supporters have also had their signs stolen this year and in past election years.

“It’s not surprising to me; it’s just disappointing,” Arnold said. “It’s theft and it’s not right.”

Hill said, “We’ve had signs taken at every election [I’ve participated in]. I don’t approve of it. It’s childish, stupid, and wrong.”

While the incumbents view the theft as par for the course, the candidates running against them say that such incidents are indicative of the political discord in their districts.

“I think it’s just an indication that my opponents are very concerned that we’re making headway, and that we just might win this election,” Michielssen said.

Carpenter, who has been vociferously critical of Hill’s character, initially told New Times that he suspected Hill or his supporters to be behind the vandalism. The next day, Carpenter revised his sentiment.

Tony Cipolla, the SLO County Sherriff’s public information officer, said that political sign thefts aren’t uncommon during an election season, but that they often go unreported. He added that the incidents that do get reported usually lack evidence or a description of a suspect, which makes them difficult to investigate.