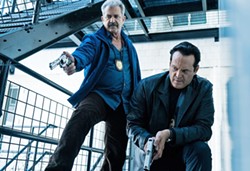 With Ridgeman's wife desperately ill and his daughter the target of local hooligans in his run-down neighborhood, he hatches a plan to enter into the criminal underworld and steal from the thugs he's normally out to arrest. What follows is a bleak but smoldering tale of two cops with their own code of ethics that no longer fit in their politically correct world.

Mean and relentless, it reminded me of the grittiness of '70s cinema, and Gibson and Vaughn are great as the war-weary crime fighters who've decided that since they can't beat them, they'll join 'em and kill 'em all. (159 min.) Δ