If you’re the sentimental sort who yearns for the days when the line between good and bad guys was easily drawn, the bad guys always got their come-uppance, and everyone went about their business in corsets, gun-slings, and colorful vests, the Great American Melodrama and Vaudeville’s Gold Fever at the Rough and Ready might be just the summer show for you. The atmosphere is more raucous than you’ll find at your average night of theater, with plenty of opportunities to boo the hapless villain (Phileas Cramner, played by Chuck McClane), gorge on the nachos, chili-cheese dawgs, and beer sold during interludes, and accumulate a fine layer of sawdust about the soles of your shoes.

Of course, if you’re the sort that finds happy endings crass, considers squeaky clean good guys obnoxious, or simply happens to be on a diet, seek snarkier theatrical fare elsewhere.

Just walking into the Melodrama’s Oceano theater makes you think of campfire skits at summer camp—“camp” being the operative word, an impression reinforced by a mandatory group singing of “Oh My Darling Clementine.” (I always suspect that the true purpose behind allowing the audience to sing is perhaps to remind us that not everybody can, a target that is cleverly hit every time, reinforcing the talent of the paid performers.) On such occasions I always mouth the words so as not be to be singled out for failure to sing, and humiliated.

The melodrama is an original work, written by Great American Melodrama staple Neal LaVine. The Los Angeles-based bard usually produces new fare for the theater once a year, often working within loose thematic parameters offered by Artistic Director Eric Hoit. This summer’s theatric gold was derived from LaVine’s most comic resource of all: reality.

The Californian city of Rough and Ready was founded in 1849, by a troupe of miners from Wisconsin, who had served under Zachary Taylor in the war between America and Mexico. Fact. The Wisconsites were so enamored with their general that they named both their town and mining company in his honor. Fact. The following year, reluctant to pay mining taxes imposed by the Union, they seceded, forming the Great Republic of Rough and Ready. Fact. But a few months later, the miners realized that they were no longer entitled to celebrate Independence Day on July 4, and they voted to re-join the Union. Believe it or not, fact. The town’s history factors largely into LaVine’s comedy, and many of his characters are named after actual people. 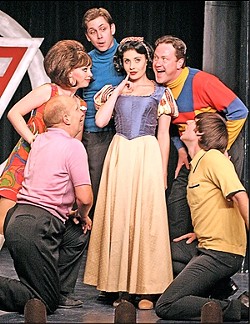 Of course, before beginning work on any melodrama with a western twang, LaVine makes a point of watching Blazing Saddles. The show’s villain, Cramner, was inspired by the film’s villain, Hedley Lamarr, played by Harvey Korman.

“I just think the villains are hysterical to write,” admitted LaVine, with relish. “They can be mean. They can be nasty. They don’t need to have a filter.” Cramner makes no pretense regarding his machinations, publicly confessing them to the audience on several occasions. The audience always loves an opportunity to boo the villain, more than they appreciate the chance to cheer the good guy, which poses some difficulty for perpetual good guy Andrew Beck.

“We’re in such a jaded society and a melodramatic hero says so many things that are just hard to take seriously,” he explained. “With some lines, I just have to tell myself, ‘Remember that there was a time when you did the right thing because it was right.’ Now we’re sort of in the anti-hero era.” In addition to serving as the tale’s Dudley Do-Right-like hero, Beck’s character provides the narration as well, a role usually served by the performance’s villain or a secondary character. His naive, occasionally verging on dim-witted, perspective is what drives the tale, commencing with his own near-lynching for a crime only an imbecile (or in this case, two well-meaning imbeciles by the names of Marcus Nutting and Alonzo Delano) would believe he had committed.

Of course, no one makes any pretense about the fact that you’re watching a show. “Let’s take the shortcut,” drawls one of the miners, as a screen casually flips up and the group enters the Dirty Dawg Saloon. After we learn that they all live happily ever after—there was never any doubt—we enter the Villain’s Vaudeville Review, where we learn that Snow White is sick of being an unpaid laborer and is prepared to begin her feeble transformation into a villain (not Yellow Snow as she initially suggests, but under the new handle, Black Ice). Under the tutelage of Doctor Evil (played by Casey Ross, drawing an excited response from the crowd), Black Ice will soon square off against the somewhat-dull Batman (the perpetual hero, Beck) and under-dressed Robin (John Keating, who flashes a naive Zach Braff smile throughout Rough and Ready), straight out of the late ’60s television series.

The villains, who can count among their numbers The Little Mermaid’s Ursula (Billy Breed) and Batman’s Catwoman, The Riddler, and The Penguin, unsurprisingly fail to prevail. But the audience learns a valuable lesson; superheroes and villains are dependent on one another’s existence. If he didn’t have an absurdly-clad villain, Batman would never have any call to leave the bat cave. Plus, the cast does a timely tribute to Michael Jackson’s “Bad.”

Sometimes, it’s good to be bad even if, at the end of the day, the good guy walks away with the contested Rough and Ready gargantuan golden nugget (RARGGN, as it is affectionately called by the townspeople). And if iambic pentameter clutters your brain, and you long for a theater that allows you to hiss and boo with untamed zeal, toss back cheesy, delicious calories, Rough and Ready is your town, Sheriff Bartly your hero, and Cramner your villain. Just don’t forget to do your vocal warm-ups before  you leave the house. ∆