The excitement is palpable among the gathering throng of about 100, who wait anxiously for a crane to arrive and place Nick Del Giorgio’s catamaran in the water for the very first time.

Built by hand over the course of seven years from $3,000 plans purchased from Seattle-based multi-hull boat designer Kurt Hughes, Del Giorgio’s boat is a monster: 42 feet long and 27 feet across, complete with two queen-size beds, a galley, and a bathroom with a shower. 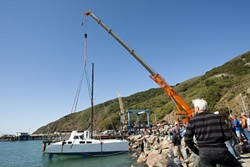 He could have bought a house; instead he built a boat.

Del Giorgio, a 35-year-old flooring contractor, has lived on the boat in the Port San Luis boatyard, working long hours laying flooring to buy the construction supplies, and working longer hours building and glassing and painting and installing the hardware necessary to sail his dream.

“I’ll probably start running charters out of Avila—champagne brunches, sunset sails, that sort of thing,” Del Giorgio says. “I got my captain’s license in January. I’ll probably save up money for a year, year and a half, and then head down to Panama, the South Pacific, Tahiti. I want to do surf charters.”

Del Giorgio’s been sailing since he was 18, mostly on small boats. His catamaran is the first cat he’s ever been on, and it will be the biggest boat he’s ever sailed.

Suddenly the crowd begins to murmur. Coming down the road is the huge crane, followed by a big rig flatbed carrying just more than 15 tons of added weight to stabilize the crane while it lifts Del Giorgio’s boat.

After about 40 minutes, the boat is strapped to the massive crane, and they’re about to lift it up.

“We’re hoping it’s about 14 tons,” Del Giorgio says. “I could have had them bring more weight, but that would have cost more.” 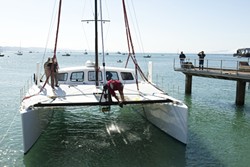 As it stands, Del Giorgio spent $1,600 to have his boat craned into the water, which is a lot better than the $4,500 quote he got if they had to bring it from the boatyard to the water. Instead, Del Giorgio and a bunch of friends used automobile floor jacks to lift the braced structure he built the boat on and pushed it to the water’s edge.

The crane operator does a test lift. The boat weighs in at just more than 14 tons. We’re moments away now, and suddenly Del Giorgio’s off and running, jumping into an inflatable zodiac to guide the boat in from the water.

aUp it goes, the crane operator lifting it out and onto the azure waters of Old Port. Taylor Curtis, one of Del Giorgio’s friends, looks on in wonder. They split the cost of the boat plans, and Curtis was going to build the same boat.

“We started this together,” he says. “I worked on mine for four months, built one hull and decided that was enough. I started a family; Nick built a boat.

Yikes! The boat’s precariously close to the rocks, but suddenly it’s in the water, and Del Giorgio scrambles aboard, runs to the bow, and smashes a bottle of champagne. The zodiac pulls it away from the rocks, and Del Giorgio kicks the twin outboard motors into gear and it tools out into the bay.

“I just want to cry,” says an emotional Vera Del Giorgio, Nick’s mom. “Oh my God, look at it! Oh my God, Nick! It’s amazing that something that came from me created something like that.”

It’s truly a glory to behold, a dream come true. Later I call Del Giorgio, who tells me he’s yet to sail it.

“I’m waiting on the sails, which are being made by SLO Sail & Canvas,” he says. “I should have the front sail this week and the main sail next week. It should be able to hit about 20 knots.”

“No, I’m nervous, but I can’t wait. It sure feels good to be floating. My next step is to go sailing, maybe down to the Channel Islands, Catalina, Santa Cruz Island.”

Seven years, thousands of dollars, and now at age 35, a new life of surfing and sailing. Dreams do come true. ∆