Former Santa Cruz locals Laura and Jameson Lucero want to build a local skate shop for their Nipomo community, but the last thing they want to do is be like a dancing Kevin Bacon. 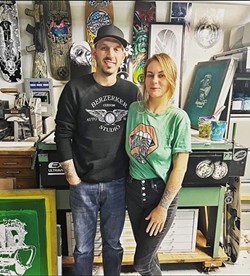 "Brick-and-mortar skate shops serve as more than places to grab products. They're organic cultural epicenters for youth and artists," Laura said. "It's not like Kevin Bacon in Footloose ... coming in from Santa Cruz to bring skateboarding to the people. It's already here."

Nipomo residents since 2016, the couple wants the skating community to flourish in its own safe space. Between an act of arson burning down the town's recreation center in 2008 and the demolition of a makeshift skate park at the old rec center site, Nipomo's skaters lost their community hubs.

The Luceros came up with a solution over the summer. They're working with the San Luis Obispo chapter of SCORE's mentors to set up the Nipomo Skate Shop. It would include boards and wheels suited for Nipomo's roads, skate tours and movie screenings, and most importantly, room for skaters to be themselves.

Hoping to open by summer 2022, Laura wants the store to provide local kids with different recreational avenues for physical activities as opposed to sitting indoors all day with no place to go.

The Luceros also plan to elevate skating in Nipomo using a screen-printing press. It's something they're already familiar with because Jameson runs a screen-printing business where he presses designs on shirts. The couple wants to extend the art to skateboards too.

"People become more conscious consumers when they understand how something is made," Laura said. "We want to have art contests where community members can get their design on a board."

"They don't cut it for skateboarding. A lot of major skate suppliers will provide you with products that you sell online," Laura said.

Jameson hopes to bring custom supplies to the dream store. He tapped into his local connections at Santa Cruz, like the staff at Consolidates Skateboards and NHS, Inc.

The 35-year-old has been skateboarding since he was 8 and was taken under the wing of Santa Cruz skating legend Bill Ackerman of Bill's Wheels Skateshop.

"Bill was always there to sell my shirts or give me a job when I didn't have money, making or designing stuff for him. It's been the glue that's kept everything in my life together. I have two skills—skateboarding and screen-printing," Jameson said.

He added that Nipomo residents would dictate what his store would look like depending on what speaks to them. He also has a few artistic ideas up his sleeve.

"I [want to] build ... a giant, 8-foot skateboard wheel. So kids can come in and take pictures with it and put it on their Instagram," he said with a laugh.

But the road to the skate shop isn't completely smooth. In her monthly meetings with SCORE, Laura found out that it's slim pickings for available properties in Nipomo.

Further, their original plan was to donate some of the proceeds from the store to a build a proper skate park for the community. But SLO County Parks and Recreation Director Nick Franco told them that would have to wait a while. Franco informed her about the county's plans to submit grant applications for a new skate park.

"He was all, 'We have a plan to stay on the original timeline. We're submitting it on Jan. 24. If that falls through, I'll reach back out to you,'" Laura said.

Having their finger on the pulse is important for the Luceros' shop to thrive. Laura said that she frequently chats with local skateboarders about their wants and needs when she bumps into them in the neighborhood. Jameson has been engaging with this sort of networking since he was a teenager.

"I would stop at a skate park, I would meet kids and ask, 'Where do you guys party?' They would take us to other cool skate spots and we'd go to skate shops," he said. "You all speak the same language: skateboarding. So there's instant unity no matter where you go."

• Ring in the new year with a chilly dip in the ocean thanks to the 10th annual Avila Beach Polar Bear Plunge. On Jan. 1, 2022, at noon, community members can participate in the icy dive for $20, which would support Friends of 40 Prado in its efforts to help the homeless community in SLO County. For more information, go to www.avilabeachpolarbearplunge.com. Δ