Gary Reynolds and the Brides of Obscurity space out

On Everybody's Somewhere, Seattle's power pop/space rock outfit Gary Reynolds and the Brides of Obscurity sounds like they're playing some obscure lost track by the Beatles, replete with throbbing bass and harmony vocals: Once you had a story. Hung your head in glory. No, it can't be too bad. Your situation's not that sad. In fact you should be glad, not mad. Took it, baby, too far. Now look at where you are. Wound up on the wrong side. Looks like both your hands are tied. Oh, do you see her (look the other way). Oh, do you need her (got nothing to say to her). Oh, everybody's somewhere.

# The song, like the album it finds itself on Santiago's Vest is a dreamy, slightly psychedelic, hook-laden romp from a band that will play Frog and Peach on Monday, April 28.

The songs on Santiago's Vest were recorded with an entirely different approach [than our previous releases], said Reynolds, who owns the studio Elektrokitty Studio where the songs were recorded. We got together and learned the songs in the studio, mainly aiming to keep only the drums and bass. Then we made up parts and added colors  we figured out how to take a happy little pop song and twist it. We also figured out how to take something that may have leaned more towards a rock sort of thing and pull it into a more twisted approach.

The heavy bass was inspired by the Beatles' Abbey Road mix, which means that you can't get it as loud as other CDs, which is exactly what Reynolds and the band wanted, said their PR guy, Alex Steininger.

We're avoiding the loudness war' that's currently going on, Reynolds added. We didn't compress the thing to oblivion either. We've always had a nostalgic feel to our music. Not on purpose, but that's just the way things turn out. On this record, it opens up and sounds a bit more current without losing its appeal. 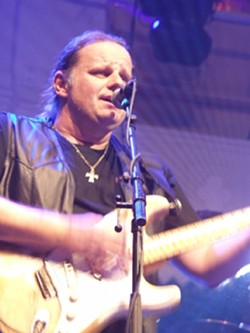 # Aside from his freakishly good guitar playing, Walter Trout is known for self-deprecation and forward thinking despite the fact that he works in the traditional-minded genre of blues.

People ask me if they should call my music blues or rock, [and] I tell them they can call it Fred' if they must have a label, Trout has repeated famously in his 35-plus year career. There's also this little nugget: The blues shouldn't be a museum the music ought to constantly expand and be alive.

Trout ain't some antiquated, stuck-in-a-rut player, see? As a teen, he did his time in New Jersey rock outfits, competing for local glory with a band called Steel Mill that featured a young kid named Bruce Springsteen. He eventually packed his Volkswagen bug and hit the West Coast, where he was the lone white face in bands fronted by the likes of Finis Tasby, Pee Wee Crayton, Lowell Fulsom, and Percy Mayfield, among others. By 1981, he was a member of the famed Canned Heat, later John Mayall's Bluesbreakers, where he shared the limelight with Coco Montoya.

After shucking his bottle-a-night Jack Daniels habit and becoming clean and sober, his work caught the attention of record labels and he set off on his own. Now with a half dozen solo albums under his belt, he's established himself as an unstoppable blues force.

Advance tickets for Walter Trout & the Radicals with opening act The Travis Larson Band at Downtown Brew on Wednesday, April 30, are $10 advance (at Boo Boo's or the venue) or $12 at the door.

Songwriter to the stars

Have you ever wondered where megastars like Emmylou Harris, Linda Ronstadt, Del McCoury, and Lonnie Brooks get their songs? David Olney, natch!

Known for his narrative, cinematic tales of the wrong side of love 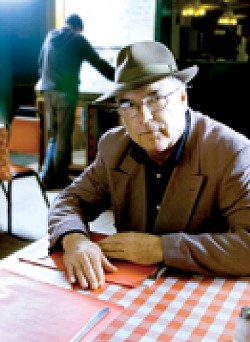 # and the law, Olney's earned a reputation as a musical outlaw. This rep has never more obviously been earned than on his new CD, One Tough Town, a gritty collection of dangerous tales of daring-do.

According to the late, great Townes Van Zandt, Anytime anyone asks me who my favorite music writers are, I say Mozart, Lightnin' Hopkins, Bob Dylan, and Dave Olney. Dave Olney is one of the best songwriters I've ever heard and that's true. I mean that from my heart.

High praise indeed from one of the greatest songwriters ever!

On Friday, April 25, David Olney with guitarist Sergio Webb plays an 8 p.m. show at the SLO Library. Local outlaw singer-songwriter Jon Bartel, whose new EP Blood & Bones suggests he'll be a perfect opener for Olney, kicks off the show. Bartel is a rasp-voiced troubadour whose dirty tales of woe churn along like an emotional freight train bearing down on your happiness, which will surely be flattened like a stamped penny. Good stuff! A $15 donation is requested.

# What's the deal with Cuesta College? How can this little junior college have such a seriously awesome music program? Their jazz and vocal instruction is unparalleled!

The two a cappella groups will perform the program from their upcoming European Concert Tour they travel in July to perform at the prestigious Festival International in Provence, France, and at the San Sebastian Jazz Festival in Spain.

Voce has a new CD, Timepieces, which will be available for sale. The Chamber Singers will perform masterpieces ranging from the Renaissance to contemporary world music, gospel, and classical works. Both groups are under the direction of John Knutson.

Proceeds from the concert will help pay expenses for the trip to France and benefit the operation of the church. Tickets are $15 for adults and $8 for kids and students with a valid student body card.

From Colorado, with love

# Americana roots act the Boulder Acoustic Society is returning to the Central Coast for two shows.

We were last seen on the streets of Morro Bay a couple of years ago as a trio, said fiddler Kailin Yong. We're returning in April as a quintet of fiddle, bass, guitar, accordion, percussion, a lot more vocals, a lot more ukuleles, and a rootsier sound with the edge of punk rock and the grace of chamber music.' Fiddle guru/mentor Darol Anger called us The future of stringband music on a silver platter.'

Guttermouth is getting old, but they still kick ass! Look, I like to write, but sometimes a band's bio is funnier than me, which is why I'm printing Guttermouth's verbatim:

God loves little children, combat medics, retarded people ... and Guttermouth. Throughout the course of their lives, the members of Guttermouth have respectively survived a myriad of the most heinous of messed up ailments that biology can inflict upon one

# group of punk rock miscreants: a drunk driving incident where a telephone pole fell upon a member and crushed his spleen, lungs, chest, and broke both femurs (Mark) a bout with Necrotizing fasciitis (flesh eating Streptococcus), which almost claimed a member's lower leg and life (Mark and Kevin) an infected abscess of the tonsils, the disease that killed George Washington (Ryan) recurrent Anaphylaxia from an unknown allergen that continues to plague him to this day (Ryan) Strabismus (commonly known as lazy eye), a condition where the eyes are typically not aligned with each other causing incurable vertigo (Don) Cytopenia, a condition where blood flow to the lower extremities is constricted to the point of Paresthesia (numb legs, Scott) and Alcoholism, a condition where too many Newcastle Brown Ales cause you to hit on ugly fat girls and listen to The Cult on your iPod at 4:30 in the morning while your roommate is trying to sleep (Kevin). However, throughout all of these hardships, Guttermouth is still alive ... and still dying ... slowly ... but rest assured, Guttermouth may just overcome these desperate ailments to bring a show to you.

# Despite having appeal worldwide, hip-hop is still relatively a U.S. commodity. True, you find lyricists in France, Japan, and Africa, but little of it makes the big leap back over to our airwaves or tops our musical charts. For a second, East London-bred MC Dizzee Rascal accepted a similar fate. His U.K. Mercury Award-nominated album Math + English scored rave reviews abroad, but never saw a physical release stateside. In small steps, indie hip-hop label Definitive Jux gave their confident stamp of approval and a push to get Dizzee to the next level by issuing Math + English in the United States. Filled with a whirlwind rush of lyrical acrobatics, Dizzee whips out rhymes with the swift-paced velocity of ragga and garage MCing, and dented with topics of late nights of debauchery and inner-city shadiness. Thickened with his accent, his vocals often seem filled with extravagant hiccups of slang. His beats are bombastic, clattering, and can easily be discombobulating. But like bull riding, if you get a tight grip and can hold on, you're in for an exhilarating excursion.

El Perro Del Mar From the Valley to the Stars

# Swedish singer Sarah Assbring loses the vintage girl pop, Phil Spector-dynamics of her self-titled debut, and instead seems to warm by the church fire on From the Valley to the Stars. With an iconic angel offering guidance on the front cover, the songs offer the sort of sweet optimism that grandmothers are famous for. The album rarely steps past a walking pace, and with her angelic, innocent voice, and the continual presence of the organ, you'll likely believe you've entered a religious institution that's all choral and no preacher. Do Not Despair offers its tenderness of hope with the warmth of pipe organs, while you'll feel the necessity to snap along to the pretty dance-line shuffle of You Can't Steal a Gift. Only Somebody's Baby offers a suggestion of the bubblegum girl do-wop of her debut. You can flip a coin between whether this will get you closer to sleep or if the overall sunny pop aesthetics will soothe your savage inner beast.

Glen Starkey has had amnesia for as long as he can remember. Tell him who he is at gstarkey@newtimesslo.com.