A local author talks running, overcoming adversity, and breaking the ice with amputees 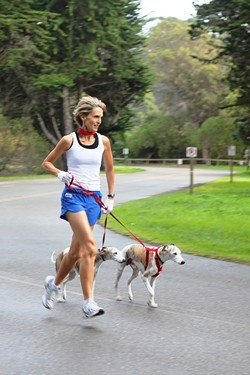 Wendelin Van Draanen is not going to write a book about brushing her teeth. It’s too mundane a topic for an Edgar Award-winning author who’s dropped her young characters into the middle of mysteries involving wilderness survival, elementary-school espionage, and costumed wrestling.

Of course, she wasn’t going to write a book about running, either, but a quick look at local bookshelves or a glance at Amazon.com will reveal her name under a telling title published in early January: The Running Dream, which has already garnered positive national reviews, as well as supportive comments from local running star Jordan Hasay and actor Anthony Edwards.

“I would never have picked running as a subject to write about, because it just seems like it would be so boring,” Van Draanen said.

As a lifelong “health and wellness” runner and five-time marathon participant—though not someone obsessed with the activity, she said—she equated the sport with everyday life. It’s just something she does, like, yes, brushing her teeth. There’s no story to it.

But then a story did hit her, as she describes it, out of left field—not to mix athletic metaphors. If it was a hit, it was a slow hit, one that started at the New York City marathon a few years back.

“They bus you over to Staten Island at 5 a.m.,” she said, adding that the race starts a long, cold five hours later. “It’s November, I’m freezing, I’m skinny. I shivered away all of my glycogen stores.”

When the actual running began, Van Draanen found herself stuck behind two people jogging along, holding a rope between them.

She recalled thinking “Who are these idiots?” as she grudgingly angled for a way around the pair. When she finally passed them, she turned around and realized that one of them was blind, tethered to a sighted runner as a friend and guide.

“I don’t know,” Van Draanen told New Times with a hint of guilt. “It just astounded me that somebody would run a marathon blind.”

She began to mull over the idea of a book about a runner overcoming adversity. It wasn’t an immediate mental leap, “but little things accumulate in life,” she said. 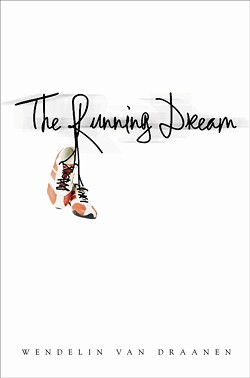 “I think I was on a flight back from somewhere and just got this idea about a girl who lost her leg, and what a huge difference,” she said, trailing off for a second. “Oh, that just devastates you.”

She tried to shove the idea out of her mind, she said, but it kept worming its way back in. As a former schoolteacher, she was particularly struck by the thought of a successful, go-getting, popular student, “a kid where everything was going in her favor,” suddenly bound, not for a bright future as an athlete, but to a wheelchair.

Thus, The Running Dream hit its stride in Van Draanen’s mind, which was already occupied with other projects, including her popular Sammy Keyes series, which had an approaching deadline.

Like any good runner, she set goals for herself, kept a solid pace, and remained committed. Though she told New Times that she never before likened running to writing, she admitted that there are a lot of similarities between lacing up her Asics and booting up her laptop.

So she ran. And wrote.

The resulting book follows Jessica, a rising, likeable track star who must have part of her leg amputated after an accident.

“That’s how I write,” she said. “I have to have a person in mind, a character in mind.”

Jessica’s road to recovery provides the double-duty plot points behind the title: After the accident, she has a recurring dream about life with both her legs, and she comes to dream, as in hope, of running again with help from a prosthesis.

While Van Draanen centers her books on the characters she creates, she also strives for real-world accuracy. She once surreptitiously climbed into a luggage compartment to research a book about a runaway who stows away on a bus. The author regularly overcomes her well-masked shyness to visit or cold call business owners and experts, from taxidermists to mortuary workers.

Her shyness kicked into high gear when it came to The Running Dream. What’s the etiquette for approaching an amputee and asking: “Hey, what happened to your leg?”

Van Draanen credited a local prosthetist for opening the gate for her. He had a client he thought would allow an inquisitive author to sit in on a stump-casting session, a necessary part of the prosthesis process. That client was “Peg Leg Greg,” Arroyo Grande’s Greg Birkholz, who helped co-found the Association of Amputee Surfers.

Birkholz and another amputee, Dana Cummings (also with AmpSurf), welcomed Van Draanen into an intimate part of their lives. Their openness and her eye for detail added obvious realism to scenes of Jessica’s fittings and adapting to her new life. Van Draanen still spends time with them as friends.

“She does such a good job capturing what it’s like to go through that,” Cummings told New Times, adding that The Running Dream nearly brought him to tears.

While a book about a high schooler dealing with the loss of a limb might seem like enough of a story, Van Draanen wasn’t content to keep her book that straightforward. The newly crutch-bound Jessica finds herself seeing her world from a new perspective, and that world—she’s surprised to learn—includes a fellow student with cerebral palsy. Rosa is a wheelchair-confined girl typically relegated to the periphery of a person like Jessica’s life, but the two forge a relationship that becomes central to both their lives and the story.

To write a convincing and human Rosa, Van Draanen again bit the bullet and approached a neighbor who she learned lived with cerebral palsy. Throughout the interviews and their visits, the two—no surprise—became friends.

While the local author crossed the finish line with The Running Dream, she’s still pushing herself hard toward new goals. There are four books left to write in her Sammy Keyes series, and Van Draanen has committed to something of a sprint at the end of a long haul that began in the late ’90s: She plans to write all four in the next three years.

“And then the series is done,” she said. “I already cry just thinking about it.”

Executive Editor Ryan Miller likes that the journalist character in The Running Dream is an ethical one. Contact him at rmiller@newtimesslo.com.