March 29, 2007
comment
SIBLING RIVALRY Sidewalk Stories will include the delightful tale of a brother who attempts, unsuccessfully, to sell his sister (portrayed by Nellie Salisbury in the picture). 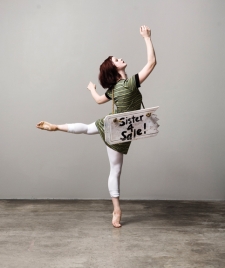 
Drew Silvaggio, Civic Ballet's artistic director, probably doesn't belong in San Luis Obispo. In fact, the choreographer, who seems to be making a habit of finding inspiration in children's stories, would certainly find greater artistic freedom in a more urban venue. But Silvaggio seems to be one of those successful artists who happily proves that challenges and limitations can inspire an artist's creativity and stubborn dedication to a vision that deserves the best possible representation. And even if he isn't writing the ballets he could be writing in, say, San Francisco or New York, his contemporary pieces create quite a splash on the Central Coast.

Silvaggio's newest piece, Sidewalk Stories, is based on Shel Silverstein's Where the Sidewalk Ends. The 20-year-old book of children's poetry seems like an unusual topic for a ballet, until you consider that it took root in the mind of the choreographer responsible for last spring's Pink Floyd-inspired production of Alice in Wonderland.

"It was a very cold night in December," Silvaggio began, describing the moment he realized Silverstein's book would make an incredible ballet. "I was actually in the middle of our run of The Nutcracker. I have a board of directors, and they have very specific needs. They want something that will attract a wide audience based on the name and something that will appeal to children. I was going to go strictly classical Giselle, La Bayadere but the PAC draws all the Russian ballets that perform those. I was lying in bed thinking, 'Okay Drew, from your childhood what do you remember that was iconic?' And I just sat up and said, 'Where the Sidewalk Ends.'"

With their rich imagery (due, in part, to whimsical illustrations) and varied content, Silverstein's poems construct and tap into a world where anything can happen and childish logic rules, though adults are graciously welcomed provided, of course, that they're prepared to leave reality behind. The logistical question of how to create one ballet out of 123 poems each with different themes and characters baffled Silvaggio, who, as always, sought inspiration in Las Vegas while writing his newest masterpiece. The X-Files fanatic took his cue from the television show and decided that the performance would have one general plot interspersed with vignettes based on particular poems.

Then came the challenge of creating a cast of characters from poems that don't feature central figures. Silvaggio decided to develop a family, with each member based on a character in a poem. He then selected different poems that the family would experience, a strategy that wouldn't have been possible had Silverstein's short works lacked their depth, poignancy, and comedy.

"These poems worked so well into a story about a family," Silvaggio enthused. "I've kind of created this 1970s kitchen on stage because, with my friends and I, everything seemed to happen in the kitchen, so I created this real kitchen on stage a sink, table, chairs. I've used that as the center point for everything that happens. One of the standout poems, from my perspective, is 'Sister for Sale.' I love that sibling rivalry that feeling of 'I hate you but I can't live without you, you're part of my blood.'"

Silvaggio read the poems again and again, gleaning new interpretations with each read. He created a rigid father who, much like the characters in "Traffic Light," never goes anywhere or tries anything new. In a somewhat playful turn, Silvaggio named the father Snowman the title of one of the poems about a snowman who decides he wants to see July a clever and sad method of foreshadowing the father's fate. In "Me and My Giant," Silvaggio again read a deeper meaning. He realized that a child communicates with a friendly giant in much the same way that he communicates with family: a distinctive language based on touch. And this became yet another theme to explore in a ballet that was growing as he turned each page.

Of course, not every poem will directly relate to the family, as in the case of "Lazy Jane," about a thirsty girl who lies on the ground waiting for the rain to come. Silvaggio admittedly got a little carried away with the piece, creating three long vignettes from the 28-word poem which should explain the presence of a woman lying on the ground at several points during the performance. All in all, Sidewalk Stories will incorporate about 25 poems, a fifth of the book's content, including favorites like "Baggy Pants," "Ourchestra," and "Boa Constrictor."

No show could capture the charm and wonder of Where the Sidewalk Ends without paying visual homage to its childish and insightful illustrations, a fact that didn't limit Silvaggio's imagination so much as compel him to select his poems with care.

"My set designers are yelling at me, 'We can't build a 30-foot monster," he laughed.

Then there was his fleeting consideration of "Sarah Cynthia Sylvia Stout Would Not Take the Garbage Out," about a girl who refuses to take out the trash: "I just knew it was going to get me in trouble, that I was going to cover the whole stage in 300 pounds of garbage."

He initially wanted to create the set entirely from cardboard, which, as it turns out, would have been something of a fire hazard beneath the hot lights. But you can rest assured that the sets will capture Silverstein's playful spirit. Silvaggio's kitchen-centered family will interact in a very realistic kitchen in a cardboard house a living, breathing (not to mention dancing) pencil drawing.

Any adults scratching their heads thinking that a crocodile with a toothache might not be the most entertaining of fare may be in for the greatest journey of all, not just through imaginative literature but into a yesteryear when you knew less and somehow more.

"When I was learning to write for theater, the director would always prompt me by saying, 'What's your overall objective?'" Silvaggio explained. "The overall objective of this was taken from the actual poem "Where the Sidewalk Ends" this place where you get to be yourself. I really thought of it as Nirvana and it takes a while to find, but once you find it you can always go back."

Silvaggio also expects the older factions of the audience to appreciate "The Invitation," during which the orchestra pit will open and dancers will walk off the edge of the stage onto the pole vault mats below. If Sidewalk Stories is, in fact, a children's show, it's a children's show with adult themes, realizations that can only come with adulthood such as the idea that you lose things along the path of growing up, and that some things (and people) can drive you crazy and be absolutely integral to your being. But the adult-friendly content shouldn't stop kids from going crazy over the imagery.

Using children's stories as a vehicle for a more serious message is nothing new for Silvaggio, whose creative instincts have not yet led him astray.

"I don't know if I belong in San Luis Obispo in terms of the work I want to do," he said. "I'm thinking of creative ways I can do the work I want to do and also create something that is forward-thinking for this community. I love doing these childish nonsensical things, but then trying to put something else into them."

Dancers will illustrate Silverstein's universal themes to some dramatic music from Queen, songs by indie rock band DeVotchKa, a good portion of the Little Miss Sunshine soundtrack, and the tunes of The Mountain Goats, who had a sold-out show at the Steynberg Gallery in early March. The eclectic soundtrack, imaginative set, and whimsical tone should carry Silvaggio's vision a long way, but ultimately, the dancers spin Silverstein's "flax-golden tales."

"My choreography relies on the amazing abilities of our dancers, and if you're a dance lover and you come to this show, you're going to see a dance style that is very different. I always tell the dancers, 'Dance like you're being chased by a cougar.' I like that image," Silvaggio said. "I feel like I've never seen a cougar, though."

Civic Ballet San Luis Obispo will perform Sidewalk Stories, based on Shel Silverstein's book Where the Sidewalk Ends, at the PAC's Spanos Theatre March 30 at 8 p.m. and March 31 at 2 and 8 p.m. Tickets cost between $27 and $32 and can be purchased at www.pacslo.org, at the box office, or by calling 756-2787.

A DIFFERENT S0RT OF RABBIT HOLE Natalie Maese danced one of the roles of in Drew Silvaggio's Pink Floyd inspired production of Alice in Wonderland, but this spring she's dancing life into Shel Silverstein's poems. 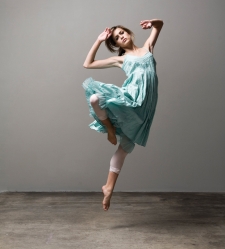 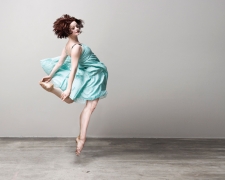