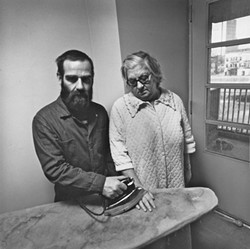 Don’t let Arthur Tress into your house unless you want your inner psyche turned inside out like a soiled sock: pretensions in, secrets out.

“I’m a little scary,” the photographer gleefully admits at our interview. Since childhood, Tress says, he’s had a knack for knowing things about people that they don’t find out about themselves for years to come. But uncanny intuition, and the boyish curiosity that accompanies it, are just part of what makes his images iconic.

Tress first began photographing his native Coney Island in 1952 with a Rolleicord camera given to him by his older sister Madeline. The abandoned amusement parks of his home turf proved a photographic wonderland.

““There were acres and acres of these Victorian amusement parks, and so I would just wander after school, taking photos of different rides and funhouses and freak shows,” Tress recalls.

The playfully surreal environs he caught on film as a kid would influence his style for decades to follow, though he wouldn’t pursue photography professionally until his late 20s. Tress studied painting at Bard College in New York, returning to the medium again only after realizing that, he says, “my photographs were much better than my paintings.” 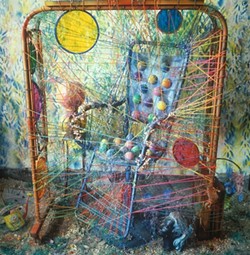 The photographer’s first photo project, Dream Collector, was inspired by a 1969 workshop on children and creativity, which he was asked by fellow Bard alumnus Richard Lewis to document. Led by Lewis, author and founder of the still-existing Touchstone Foundation, the aim of the workshop was to teach children to use their dreams as inspiration for creative projects. Though Tress’ presence was intended purely for documentary purposes, he was so influenced by Lewis’s creative process that he altogether ventured away from documentary photography.

“He put a lot of emphasis in that workshop that your knowledge should come out of your own personal imaginative world,” Tress says. “And so that changed my way of working.”

He began conducting his own workshops, asking kids to write down and act out their dreams.

“When I began this dream project, I actually began directing the kids with their suggestions: flying, falling, being chased by monsters, different anxieties,” Tress explains. “I was one of the first people to work like that.”

Tress’ next move was a book called Shadow, a compilation of 100 eerie images of the artist’s shadow, which he refers to collectively as a “dream journey.” Shadow was followed by a series called Theater of the Mind, in which Tress explored relationship dramas between adults. As he had with Dream Collector, Tress worked from existing psychological elements, in this case the interplay between mother and daughter, or father and son, and so forth. Tress’ intuition really came out to play for this series, nonchalantly coaxing secrets to the surface.

Tress cites a photo of a high school friend, Eddie Berman, and his ailing mother. His mother’s poor health had pulled Berman away from his hippie existence in Oregon and back to her Coney Island apartment.

“There was an ironing board in the living room,” Tress says, “and I ironed his mother’s hand.”

At my expression of horror, he quickly amends: “With a cold iron!” The resulting photo shows Berman looking intensely into the camera, holding his mother’s hand squarely beneath an iron, as directed by Tress, while she looks anxiously down at the trapped appendage.

After his mother’s death, Berman told Tress he’d hit the nail squarely on the head: “He said, ‘I love that photograph … you were right on, because I could have done anything I wanted to my mother.’”

By ’85, though, Tress was ready to mix it up once more. He stopped photographing people, feeling that, as he puts it, “I had said everything I needed to say, and I didn’t want to repeat myself.”

His switch to color still-lifes, and the various series that followed—Fish Tank Sonata, Requiem for a Paperweight, Hospital—further revealed the fertility of the Tress imagination, his photos teeming more wildly than ever with emotions, like myriad bugs in a jungle.

Tress has since moved on, and the years since his 1995 move to Cambria have seen him returning to his photojournalistic beginnings. But in the public consciousness, he’s still the guy who did the male nudes in the ’80s. 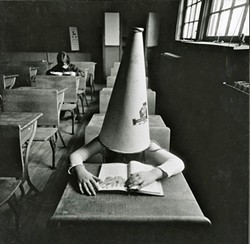 However, a recent unearthing of Tress treasures might stand a chance of changing the public’s conception of his work. During a summer stay with his older sister in San Francisco in 1964, a 23-year-old Tress wandered the streets, capturing images of a city where everything was changing. His was a summer of harlequin glasses and scarves, of civil rights demands, Beatlemania and “Ringo for President” signs—the product of a collision of the 28th Republican National Convention and the Beatles’ first North American tour.

Cleaning his sister’s home after her death, he recovered the forgotten body of work. Sixty-four of these images now comprise the exhibit “Fresh: Arthur Tress, San Francisco 1964,” set to open in the fall at San Francisco’s de Young Museum.

The photos fit like a missing link into the Tress canon, exposing truths about the time and place without resorting to the clichéd sights. It’s the day-to-day dirt juxtaposed against a background of the surreal, a precursor to much of his later work. Tress may be known for his enigmatic, naked hotties, but more often than not it’s what we don’t see that intrigues us.