Excelaron's Huasna Valley oil project is back and bigger than before 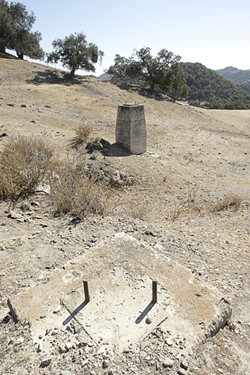 When Excelaron first proposed to drill for oil in the Huasna Valley in 2007, a group of residents didn’t buy it. A bunch of farmers and ranchers came together as one of the most effective activist groups in SLO County: the Huasna Valley Association. They effectively killed the project.

“We’re trying to be prepared, and we’re in for the long haul,” said HVA member Tracy Del Rio.

On Jan. 14, the SLO County Planning Commission will hold a scoping meeting for the latest Excelaron proposal, which has upped the project’s environmental review from a mitigated negative declaration to an environmental impact report (EIR) and from four wells to as many as 12.

County planners officially accepted the new application on Dec. 19—about nine months after Excelaron pulled its first project and five months after it submitted the new, expanded project.

A lot’s happened with Excelaron in the interim. In February 2009, Mogul Energy International acquired 40 percent interest in Excelaron in exchange for a $2.3 million capital contribution, according to a filing with the Securities and Exchange Commission. With the project in approval limbo, it extended the agreement in September. Then later that month, the labyrinth of companies with a stake in Excelaron became more complicated. On Sept. 21, Excelaron entered into an agreement with a Canadian capital pool company, Vesta Capital Corp., in which the investment company acquired 65 percent interest. Vesta thus enveloped other Excelaron investors, including Mogul, United Hydrocarbon Corporation, and Barisan Energy Limited.

It’s a difficult financial web to navigate, to say the least. Asked about the multiple investment agreements, Del Rio said few people can say exactly what’s going on, but she took it as a sign that the Huasna project isn’t going as swimmingly as the company might have expected.

She’s probably right. Australian oil prospector Grant Jagelman is the man behind Excelaron and a major shareholder with parent company Australian Oil Company, where he holds the title of managing director and 6.65 million indirect shares. The company owns 35 percent of Excelaron, according to the 2009 annual report, which also details that by the end of the 2008-09 fiscal year (ending June 30), AOC spent about $6.2 million and lost about $4.7 million. In that report, AOC Chairman Andrew Childs’ letter to shareholders begins almost apologetically.

“This year has been frustrating due to delays in the permitting of the Huasna project in California as a result of a submission by a local residents association,” Childs wrote.

Excelaron spokeswoman Nicole Ratcliff painted a brighter picture. She said the first application was pulled in order to meet community desires and up the environmental review.

“We look forward to continuing interaction with the community and getting feedback as the project makes its way through the [California Environmental Quality Act] phase,” Ratcliff said.

Ratcliff added that the increased capital from new investors was needed to ensure Excelaron could stay financially afloat during the renewed environmental review process.

The first application to test and drill four existing wells in Huasna Valley fell under a mitigated negative declaration, one of the lowest environmental review levels for local projects. Excelaron’s new proposal, which includes the four test wells and the possibility of eight more if production looks good, will undergo a full EIR review. SLO County planners have yet to award an EIR contract to one of three bidders. Excelaron will pay for the EIR, which could range from $250,000 to $450,000.

One issue that will certainly come up in the environmental review is the cleanup of abandoned oil wells from the 1980s. New Times reported in March 2009 that the new applicants have business ties to the companies that abandoned the old wells. In 2006, before Excelaron was widely known, Australian Oil Company told investors in a quarterly report that a man named Wil Divine owned 50 percent of Excelaron and AOC owned the other half. Divine used to go by the name Warren William Perrine when he owned Deuel Petroleum Company in 1985. That company also explored several wells in the Huasna area but couldn’t squeeze a profitable production and never cleaned up the mess. The company also changed its name to United Hydrocarbon Corporation, which has a 25 percent interest in Excelaron, according to a statement from Vesta Capital Corp.

Excelaron’s letter to the county announcing it was pulling the first application emphasized that the company had no knowledge of Divine’s involvement in the earlier mess, and he is a “non-contributing, minority equity participant. Mr. Divine has no management involvement, nor control of, Excelaron, LLC.”

Despite the Devine connection and the proximity of the old wells to Excelaron’s proposed site, the clean-up effort is being spearheaded by the California Department of Oil, Gas, and Geothermal Resources (DOGGR) using a $20,000 county bond for funding.

John McKenzie is the county’s project manager and said if Excelaron’s project is approved, it will be contingent on clean up of on-site tanks from the old drilling operations. The Department of Oil, Gas, and Geothermal Resources awarded Excalibur Well Services a $140,000 contract to plug and abandon five wells. The money comes from a $1 million annual orphan-well fund.

On Jan. 14, planning commissioners will hear public input on the project, in basically a crash course about the environmental issues that will need to be addressed. Really though, nothing’s changed since the first application was killed and resubmitted almost a year ago. From the Huasna Valley Association standpoint, the project has the potential to bring a plethora of impacts to the serene valley—including noise, pollution, and traffic from oil-hauling trucks.

“There’s still the same questions that have to be answered,” Del Rio said.