Are offshore oil rigs on our horizon?

Morro Bay fisherman Jeremiah O’Brien can barely imagine how his counterparts in the Gulf of Mexico will cope with all the oil spewing from BP’s failed Deepwater Horizon well.

“It’s devastating to the fishing industry. The resource will take years and years to recover,” O’Brien said as he prepared his boat for a summer of hook-and-line albacore fishing in West Coast waters that are still free of oil rigs.

“All of those fish eggs, spawn, and larvae will be wiped out for generations with this spill,” he said, shaking his head.

Fishermen are still waiting for compensation for the last big oil spill, by the Exxon Valdez in Alaska, after more than two decades of battling the oil company in court. “The fishermen are getting burned, first with the spill and then with the settlement,” said O’Brien, who is president of the Morro Bay Commercial Fishermen’s Association. 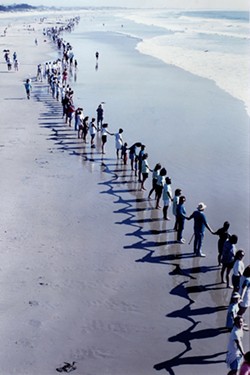 San Luis Obispo County’s rich marine resources seem relatively safe from offshore oil spills, for now. But ideas diverge about the best way to protect those resources well into the future: expanding the Monterey Bay National Marine Sanctuary, relying on Congress to renew a drilling moratorium, or fighting off the oil companies with sheer people power.

President Obama’s unexpected announcement last month that much of the East Coast would be opened for drilling has raised public concern that California could be next. The federal Minerals Management Service has already marked out a grid of potential lease blocks in federal waters off SLO County’s coast, each one nine square miles.

And there is oil there, enough to supply the nation for a month, according to some estimates. It’s a thick crude, the consistency of peanut butter, not suitable for making gasoline but fine for asphalt.

Currently there are no leases off SLO County. The Minerals Management Service recently relinquished the undeveloped leases that did exist off the southern part of the county, after courts determined there had been inadequate environmental review, according to MMS spokesman John Romero.

The closest rig is Platform Irene off the Vandenberg Air Force Base in northern Santa Barbara County, where Texas-based oil company PXP wants to expand its drilling into state waters closer to shore. That proposal was recently taken off the table by Governor Schwarzenegger in response to the gulf disaster. But Exxon Mobil has also applied to drill into the oil-bearing Tranquillon Ridge in state waters, not from a new offshore rig, but from onshore at Vandenberg, according to a spokesman for the Western States Petroleum Association, Tupper Hull.

Hull points to the oil industry’s “stellar safety record” off Southern California since the devastating Santa Barbara oil spill of 1969. “Less than 850 barrels of oil have been accidentally introduced into the ocean in the last 40 years. That’s 850 too many, but it demonstrates how seriously we take these operations,” he said.

Still, accidents can happen, a possibility that worries fisherman O’Brien. “If PXP blew, everyone would be affected, period. They’d be crazy to push for that or any new drilling now,” O’Brien said.

The latest five-year plan for offshore leasing, recently announced by President Obama, does not include any Pacific leases, a decision the Western States Petroleum Association wants the administration to reconsider. “There’s no imminent movement to open up new federal leases in California. We might wish there were, but the reality is that’s not likely. Beyond the five-year plan, in 2017, it’s anybody’s guess,” Hull said.

A grassroots campaign to permanently ban drilling off SLO County’s coast is redoubling its efforts since the gulf gusher. “If we don’t want that to happen here—forever—we have a silver bullet: a national marine sanctuary,” said Andrew Christie, a member of the local Marine Sanctuary Alliance. “A marine sanctuary protects the coast from all manner of toxic incursions,” including ocean dumping, he said.

Establishing the Monterey Bay marine sanctuary required years of effort, according to sanctuary expert Richard Charter, now with the Defenders of Wildlife. With the support of local fishermen after the 1989 Exxon Valdez spill, former local Congressman Leon Panetta was finally able to push through the sanctuary legislation in 1994 by stapling it to a hurricane relief act.

“It takes a triggering event to get action,” Charter noted.

The Monterey Bay National Marine Sanctuary’s boundaries extend from Cambria to north of San Francisco, the largest of the 14 national marine sanctuaries in the United States. Offshore oil drilling is prohibited within these boundaries—“three layers of protection you can’t get any other way,” Charter said.

Several “serious” attempts have been made over the years to expand the sanctuary boundaries to the south, all the way to northern Santa Barbara County, he noted, adding, “It takes heroic, dedicated, and sometimes lengthy effort.”

The local chapters of Surfrider and the Sierra Club have joined forces to build support for expanding the sanctuary to cover the SLO coast. Their recently formed Marine Sanctuary Alliance is reaching out to coastal business owners and other local residents, seeking support for the expansion.

“This [the Deepwater Horizon explosion in the gulf] is a triggering event,” Christie said.

Sanctuary supporter Carol Georgi spoke at a recent Surfrider fundraiser in SLO about the unique ocean ecosystem the expanded sanctuary would protect. She held up a 500-page report documenting SLO County’s many coastal assets, prepared by county officials for an earlier expansion effort in the 1990s.

Supporters want to focus the latest sanctuary expansion efforts on protecting and enhancing the local fishery and the local fishing heritage, under the direction of a local sanctuary advisory council separate from the existing Monterey-based council.

But in spite of the recent “triggering event,” expansion proponents may not find it easy to generate a broad base of support. Surrounded by controversy for years, the idea of a local marine sanctuary seems to have lost ground lately due to fears of a loss of local control. Under national law, marine sanctuaries are run by the National Oceanic and Atmospheric Administration.

The San Luis Obispo Chamber of Commerce changed its position a few months ago because of local control issues, the latest in a series of resolutions about sanctuary expansion. A March 2007 motion called for the chamber to participate in exploring the possibility of expanding the marine sanctuary. Then in April 2007, a month later, a new motion passed, calling for the chamber to take a leadership role in building consensus on the issue. By August 2009, the chamber decided to remain involved in discussions but not to support a marine sanctuary along the SLO County coast until consensus of stakeholders is resolved, “specifically governance issues and local control,” said chamber CEO David Garth.

“We were frustrated,” Garth explained. “We couldn’t seem to build consensus.” 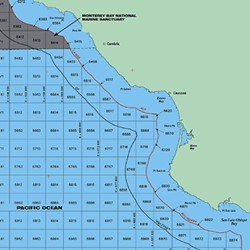 The Morro Bay City Council opposes a local sanctuary. In addition, representatives from Monterey told the chamber the sanctuary’s federal decision-making process has been “disastrous,” Garth said. “They said, ‘We can’t do diddly without going through all these committees. It’s so restrictive we can’t use our own harbor. The board doesn’t listen to local people.’

“We heard that the benefits aren’t as great as we thought. We’re just not the proponents we once were.”

Consensus on the issue has also eluded the Marine Interests Group, a forum of elected officials, businesspeople, conservationists, fishermen, scientists, and citizens set up in 2003 to look at expansion. After hearing from a series of experts on various topics, “the group went through a decisioning process on the options for a marine sanctuary,” explained their facilitator, Don Maruska.

A straw ballot of stakeholders showed there wasn’t consensus for sanctuary expansion, but there was support for enhancing marine resources and collaborating on research. The San Luis Obispo Science and Ecosystem Alliance, SLOSEA, was formed to learn more about the state of the local fisheries, bringing scientists to work alongside fishermen.

“The Marine Interests Group has been getting people to work together to break down barriers and mistrust,” Maruska said. “Everyone is committed to enhancing and sustaining our marine resources. They just may not agree how.”

SLO County Supervisor Bruce Gibson is in favor of expanding the Monterey Bay sanctuary to include the county’s coastal waters, as long as fishing remains an allowable use.

“Maybe a sanctuary could be an organizational structure to untangle the layers of fishing regulations, and to establish rules to assure a sustainable fishery,” Gibson said.

Local officials in Monterey have been “annoyed” at the governing structure of the sanctuary, Gibson added, calling for more consensus building on how to administer the area. “There’s been a lot of discussion about the need for local governance. But you don’t get local governance. That’s not part of the deal with a sanctuary. What we need is a strong local advisory committee.”

The fear that the Monterey Bay National Marine Sanctuary staff is now interested in regulating fishing is putting fisherman O’Brien off, especially with prime sections of the coastline already closed to fishing. He sees that as more of an imminent threat than offshore drilling.

“I don’t see any oil companies knocking heavily on our door. For us as the fishing industry to support a marine sanctuary to protect us from an oil spill—that’d be like letting a weasel into the henhouse to guard the chickens against coyotes,” O’Brien said.

“The more people understand and educate themselves about what we’re doing, the more they would support sanctuary goals,” she said.

A sanctuary visitor center at a San Simeon beach has been educating the public about resource protection for five years, she said.

In the absence of marine sanctuary expansion, offshore oil drilling could be prevented by a new congressional moratorium. Local Congressmember Lois Capps has introduced a moratorium bill in the House of Representatives, and California’s senators are promoting a moratorium in the Senate.

In any case, California won’t see any new offshore oil leases during the next seven years, under the latest Obama administration policy. And if 2017 brings a new round of interest in local offshore oil, a strong public protest could still stop it, according to Garth of the SLO chamber.

“We’ve been able to hold it off for 29 years,” he said. “Maybe seven years at a time isn’t so bad. You just fight it when it comes up.”

Public outcry has already helped keep our coast clear of offshore rigs, in the face of an earlier push to develop leases here. In response to a proposed oil platform off Pismo Beach in the late 1980s, SLO County voters passed a measure prohibiting any onshore support facilities. Hundreds of people turned out to oppose offshore oil at a Minerals Management Service hearing a few years later. A grassroots protest called Hands Across Our Beaches attracted national attention.

“We had everything from bikers against offshore oil to students from Allan Hancock at the hearing in Santa Maria in 1990,” recalled John Romero, a spokesman for the federal Minerals Management Service. “As a result of that public input, those areas were not included in the final 5-year program for leasing.”

Romero said the concerns of Californians “weighed in to the decision” by the Obama administration to exclude the California coast from the latest five-year leasing plan.

According to Charter of the Defenders of Wildlife, “Now we have the president saying California gets a reprieve till 2017. California is ground zero next.”

He’s especially worried about the effects even a small oil spill off SLO County would have on the sea otter population along Big Sur. With oily fur, a sea otter dies a horrible death of hypothermia, he said.

“If the San Luis Obispo coast is considered a local and national asset, you have between now and 2017 to figure out how to protect it.”