Palm Street is home to the newly named Gala Pride and Diversity Center, formerly known as the Gay and Lesbian Alliance of the Central Coast. The organization's been around since 1989, but in 2018 community members said they wanted a name with more inclusivity.

Some members of the LGBTQ-plus community didn't feel represented by the organization's name, so in July 2018 Gala held a town hall meeting to start the process of changing its name while taking community input. 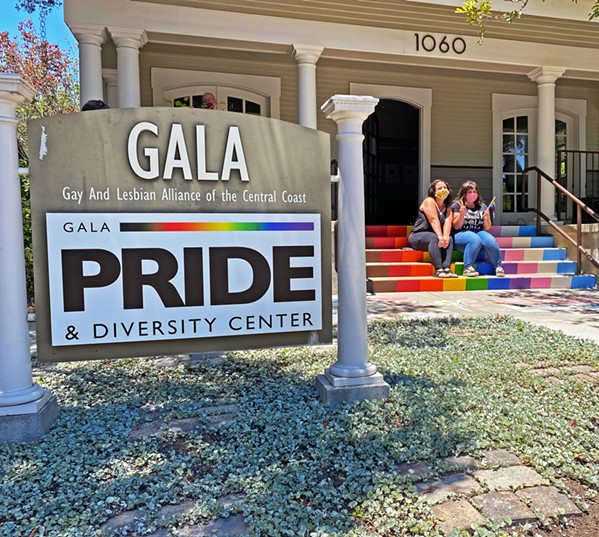 Along with the name transformation, Gala reworked its mission statement to say that the organization supports and empowers people of all sexual orientations, gender identities, and expressions in order to strengthen and unite the Central Coast community.

"We're really trying to expand our offerings and make sure that not only are all LGBTQ folks accounted for but that we're also thinking about intersectional identities, and we're advocating for our most marginalized constituents," Gala Executive Director Michelle Call said. "So it really is a whole shift away from that Gay and Lesbian Alliance, which was great and has served us well for all these years, to this new want to include everyone in the name."

In order to officially change the organization's name, Call said the nonprofit's board had to amend its bylaws for the state of California. The amendment was voted on in January of this year and sent off for the state's recognition. Call said hearing back from the state took longer than anticipated due to the coronavirus and its impacts on office closures.

"So it finally came through yesterday, in the nick of time. It's just perfect timing," she said on June 27.

The state's recognition was one factor that made this year's Pride celebrations in San Luis Obispo special. On June 27, individuals and couples wearing rainbow pins, shirts, or face masks stopped by Gala to take a photo, say hello, and "Happy Pride!" The attendees didn't stay for more than 20 minutes at a time—by design, Call said. It was a safe alternative to having a large gathering.

"We wanted to just have one thing where people could come by in person, because we recognize the importance of seeing other people in the flesh. It's really important for our mental health," Call said.

She said the organization felt it was vital to create a safe event where people could come together, especially for those who live in non-affirming households.

Attendees in masks followed the signage to socially distance their way to Gala's steps, which were recently painted in rainbow colors, and snap a photo. As people left, others would arrive, which Call said she was happy about.

"Now they can really see other people in their community, come see the rainbow steps and be proud, and be among people that care about them," Call said.

Among the day's participants were 14-year-old friends Aubrey O'Leary and Brooklyn Marin. O'Leary said she came out a year ago and being able to go to a small event for Pride was very important for her.

"I came out two years ago, and I made it a tradition to go to Pride every year because it's a lot of fun. It's where you can be yourself so I enjoy it a lot," Marin said.

O'Leary was especially appreciative of the safety precautions Gala took in order to make the event possible.

"Not only are we being kept safe, but we're also given the message of, 'Be proud of who you are,' and show your pride," O'Leary said.