Just before 1 p.m. on Dec. 27, a Mitsubishi Eclipse exited Highway 101 onto Grand Avenue in San Luis Obispo, but the vehicle blew past the stop sign at the bottom of the off-ramp and crashed into a bus stop enclosure, destroying it beyond repair. 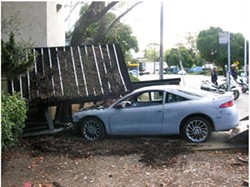 From the information relayed to dispatchers, officers first assumed the driver had fled the accident, but they soon learned the driver never existed at all, according to a press release.

Oregon resident Daniel Conrow had been towing the car on a flat-bed, but the vehicle was improperly secured and rolled off the truck. Conrow returned to the scene and was cited for hauling an unsafe load. No one was injured in the accident.

Dee Lawson, a transit assistant with the city, said crews have since removed the old shelter and cleaned up the area. After a new one is ordered and installed, Conrow will receive a bill for the expenses, which Lawson estimated would be around $5,000.