Those were 5th District Supervisor Debbie Arnold’s suggested fixes to the water issues associated with the proposed agricultural cluster subdivision of 102 homes on 1,900 acres of Laetitia land between Arroyo Grande and Nipomo—to offset residential water use by putting restrictions on what the landowner could use remaining agricultural land for. The proposal by winery owner Janneck Limited and RRM Design Group was denied by the SLO County Planning Commission earlier this year, and one of the reasons was a lack of groundwater in the area. 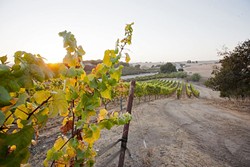 Arnold’s usual pro-agricultural stance on items that come before the SLO County Board of Supervisors seemed to morph into something different.

“The project kind of gives you an opportunity to lay off the ag usage,” she said during an appeal hearing on Sept. 27. “I’m still convinced that this project could be a better situation than what could happen.”

Her repeated pleas had little affect on the rest of the Board of Supervisors, who voted 4-1 to uphold the Planning Commission’s February denial of the project. Her colleagues each cited water as their biggest problem with the project.

“I live there, and people are running out of water. … You have people trucking in water right now,” 4th District Supervisor Lynn Compton said. “If we were three to five years out of the drought, I would be voting yes on this project, I really would, because I like this project.”

Nipomo resident Vern Garcia, who spoke during public comment, said since 1988 the water levels in a well on his property have dropped from 68 feet below the surface to 520 feet in 2016. He also said the rate at which water levels are dropping has accelerated since 2009.

Sherie Fitz-Gerald, who lives on Rim Rock Road, said the well on her property went dry within the last month and so did her neighbors’. They currently truck water in, and her biggest concern right now is not having enough water to fight a fast-moving blaze should a fire start in the area.

“This has been going on for 13 years,” Fitz-Gerald said, referring to when the project was first proposed. “We haven’t gained more water in our area; we have gained less.”

Nevertheless, Mike Brown from the Coalition of Labor, Agriculture, and Business echoed Arnold’s statements, arguing that the housing development was the only way to ensure water wouldn’t be pumped to exhaustion by intensive agricultural operations such as planting more grapes.

“This project actually improves the situation,” he said at the meeting.

Third District Supervisor Adam Hill said the thought that developing agricultural land into housing would save water was an “interesting approach” to the situation.

“They just can’t prove that there’s enough water to sustain this community, long-term. … It would be pretty close to irresponsible to approve this project,” he said. “We’re not going to build our way out of this.”

He continued by saying the agricultural cluster ordinance that spawned this development is something that needs work. The policy was implemented more than two decades ago, and it gives property owners an opportunity to build tightly clustered housing developments on their land. But its intent, to protect agricultural land from being subdivided and developed, sometimes appears to get lost in the ordinance’s loopholes.

The Board of Supervisors asked county staff to rewrite the ordinance and address its problems in 2009, following the controversy created by the Santa Margarita Ranch development. But in 2012, the board voted to postpone a decision on that rewrite. On Sept. 27, Hill called his vote not to fix the ordinance four years ago the biggest policy mistake of his political career.

Hopping on Hill’s train of thought, 2nd District Supervisor Bruce Gibson wondered how the project could call for the removal of acres of vineyards and still be protective of agricultural land.

“This is not a cluster, this sprawls out across ag land,” he said. “Once those houses are there, if there’s a water conflict, ag loses to residential. ... Are we going to turn the spigot off to homes? I doubt it.”