Could it be the abundance of local musical talent that makes our little spot on the globe so happy? The New Times Music Awards celebrate the best of what local musicians have to offer—and offer they sure do, with nearly 300 original songs entered in the contest. Three hundred!

After many ear-pleasing hours and plenty of head scratching, the judges have finally spoken. First-place winners in various musical categories will collect their fabulous Newtie awards—and share their talents with the audience—on Thursday, Sept. 6, at SLO Brew in downtown San Luis Obispo. And you’re invited!

Doors for the all-ages, $8 show open at 6:30 p.m., and the music starts at 7 p.m., when Taktical—first-place winner for hip hop, for his song “That Good Touch”—struts his stuff.

Next up is the country/Americana/folk category first-place winner Emily Wryn, a young singer/songwriter from Lompoc who wrote the winning song “Head on Straight” when she was just 16. A dynamic vocalist who sings of love lost and love gained, Wryn’s voice is sometimes whispery, sometimes soaring.

The Brew will be hoppin’ when shoegazers The Swan Thief throw down, starting just after 8 p.m. These local-boys-made-good won the first-place award in the rock/alternative category with their song “Sun Suit.”

Back for the second year in a row is first-place R&B/blues winner Dr. Danger, rippin’ it up with their original tune “Better Treat Me Right.” Very danceable, folks!

Closing out the show will be crowd favorite Zongo All-Stars, winners in the reggae/worldbeat category for “Synchro Sax.” Fans of dancing under the sky have had plenty of opportunities to groove outdoors with the Zongo guys this summer, and now it’s time to enjoy them on the Brew’s dance floor.

Special thanks to the unsung heroes: the sound crew. Depending on their requirements, the order of the performances may be subject to change so all goes smoothly.

All these winners will face off to see who puts on the best live performance, judged on the spot. Also on hand will be the second- and third-place winners to mingle with their fans, find out what place they won, and pick up their awards: Connley Simpson, Craig Nuttycombe with Piper Heisig, History of Painters, The Honeymoon Phasers, Klockwyze, Mark Adams, The Mojo Combo, St. Vincent Folk, Steven Sweet, Venomous Voices, and Wynn featuring James Kaye.

You’ll also find out who will be taking home Newties for Best Songwriter, Best Album, and Readers’ Choice. A cool Ernie Ball Music Man electric guitar will be raffled off (tickets cost $5 apiece, or $10 for three, available at the New Times office till 5 p.m. Sept. 6 and at the show), plus commemorative T-shirts and CDs will be available.

What’s cookin’ at the Brew

Once all the crowd fervor from the New Times Music Awards has died down and every last note has faded away, SLO Brew has plenty more great music planned for your listening pleasure. Against Me! is set to perform on Friday, Sept. 8, at 7 p.m., but if you haven’t already bought your tickets, you’re probably out of luck—this show is sold out.

Tickets are still available, at least as of the time of this writing, for The Adicts, billed as “the longest serving punk band with the original lineup.” Known for their distinctive Clockwork Orange “Droog” image, lighthearted lyrics, and outlandish live shows, this English band has been playing together since its debut in 1975 in Ipswich. All the Young Droogs, their latest release, is the band’s 10th studio album. Fresh from gigs at two SoCal House of Blues, The Adicts perform Sunday, Sept. 9 (8 p.m.; all ages; tickets $20 advance and $22 at the door).

Next up is San Francisco rapper Roach Gigz, whose unconventional style and stage charisma have seen him rise to become one of the hottest performers in the Bay Area. Roach Gigz takes the stage on Monday, Sept. 10 (7:30 p.m.; all ages; tickets $10 advance and $12 at the door).

Alt-rockers Camper Van Beethoven first made a name for themselves in the early ’80s, with their single “Take the Skinheads Bowling”—which is still a favorite on college radio stations. This Santa Cruz band is known for its fresh mix of ska, pop, punk rock, folk, alt-country, and even some world music. Hear Camper Van Beethoven for yourself on Tuesday, Sept. 11 (8 p.m.; 21-and-older; tickets $15 advance, $17 at the door). 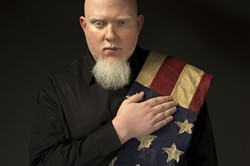 SLO Brew is the place to be for the kick-off of prolific rapper Brother Ali’s 38-city North American tour, titled Mourning in America. He’s “fully recharged and inspired by his eye-opening first trip to Mecca; the 2011 uprisings in the Middle East; and the world wide Occupy movements,” according to press materials. Brother Ali’s hard-hitting new recording, Mourning in America and Dreaming in Color, is a scathing critique of America—with an edge of hope. Brother Ali and his band Blank Tape Beloved perform on Wednesday, Sept. 12. Homeboy Sandman with DJ Sosa will open the show (1 p.m.; all ages; tickets $16 advance and $18 at the door). 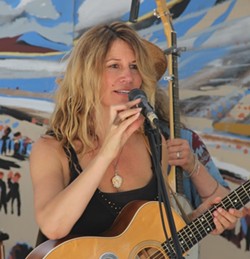 Blues and finger-style guitarist Dorian Michael has been a working musician for four decades, playing in a variety of bands over the years. He calls his solo music “contemporary original,” reflecting his interest in a number of musical styles. Get ready for a few surprises when Dorian Michael is the featured performer at the Songwriters at Play Showcase on Thursday, Sept. 6, at SLO Down Pub in Arroyo Grande (6:30 to 9:30 p.m.; all ages; pass-the-hat). You’ll also hear four-song sets by other singer/songwriters.

Fast picker Bruce Goldish is known in Santa Barbara as the guy with the frog in his guitar, or the guy who plays in the parking garage. He’s also performed at the Live Oak Music Festival, Cold Springs Tavern, and SOhO in Santa Barbara, as well as all over the United States. He’s known for fingerstyle guitar, with flashes of Hawaiian slack key and new age—along with twisted stories he swears are true. Bruce Goldish is the featured performer on Tuesday, Sept. 11, at Kreuzberg in downtown SLO (6:30 to 9:30 p.m.; all ages; pass-the-hat).

Head to D’Anbino Vineyards and Cellars in downtown Paso Robles for a cabaret-style quintet known as Barflyz. This group features seasoned musicians who’ve played with some of the biggies, including Steve Miller Band, Tower of Power, and Carole King. You’ll hear cool jazz, pop hits, standards, and bebop when Barflyz performs on Friday, Sept. 7, at 8 p.m. ($10 at the door, $5 for record club members).

Souls of Love is a reggae music collective assembled by ILocks, the longtime keyboardist and backing vocalist for Eek-A-Mouse, Raw Michael, and the Sons of Negus. Throughout his career, ILocks has bridged the gap between the black urban culture of L.A. and the influx of reggae. The son of a Mexican mother and an Italian father, he was adopted by an African American couple and grew up in the Baptist church. ILocks formed Souls of Love with his wife, Geri Love Walker, his eldest son, Elijah M. Walker, and his longtime friend Gerald Couchman. Souls of Love performs at the Frog and Peach on Friday, Sept. 7.

On a mission to reinvent old-time music for a modern age, the Crooked Jades push boundaries and blur categories with their fiery, soulful performances. As one reviewer writes, “This San Francisco quintet keeps true to their old-time string band heart, yet in subtle, weird ways, they exaggerate the slightly-crazed aura of the rural pre-radio-era music. It makes for a haunting, sophisticated trip to Appalachia.” The Red Barn Community Music Series in cooperation with KCBX Public Radio and the Live Oak Music Festival will present The Crooked Jades on Saturday, Sept. 8, at the Red Barn at South Bay Community Park in Los Osos ($10 suggested donation; call 534-9021 for info; potluck supper and potluck band at 5 p.m., show at 6 p.m.).

Award-winning singer/songwriter/guitarist Brad Wilson sings about his travels on the road, where he and his rockin’ blues band have played more than 100 shows a year. His music has been featured in John Carpenter’s films and the NBC soap Passions, and his band has played at blues festivals all over the state. Voted Best Songwriter at the All Access Music Awards in Los Angeles, and Best Blues Band at L.A.’s Rock City News Awards (three times!), Brad Wilson is a crowd pleaser. He plays on Saturday, Sept. 8, at 8 p.m. at D’Anbino ($10 at the door, $5 for record club members).

How does Deep Fried Bubble Gum sound to you? Chewy, right? This L.A.-based acoustic duo—Jim and Jamie Becker—is steeped in Southern country and blues roots with a pop flavor. They call their upbeat roots music “organic soul.” Your chance to chew on Deep Fried Bubble Gum comes on Saturday, Sept. 8, at 8 p.m., when the duo plays at Linnaea’s Café in downtown SLO.

Fresh from a lively performance at the Breakfast Club at the Strawberry Music Festival, local ensemble the Mother Corn Shuckers will dish up some upbeat tunes at the Cayucos Tavern on Saturday, Sept. 8. Hear a preview at mothercornshuckers.com.

With unique renditions of tango, swing, folk, and European Gypsy music, Café Musique combines the beauty of the violin with the subtle expression of the accordion. This compelling local ensemble is quite unlike any other band, at times tear jerking and at times hilarious. Café Musique takes the spotlight at the last Arroyo Grande Village Summer Concert on Sunday, Sept. 9, at 1 p.m. at the Rotary Bandstand, all for free.

Internationally known vibraphonist and drummer Chuck Redd is the next attraction at the famous jazz artist series at D’Anbino in Paso Robles. Redd has performed on both vibes and drums with many of the jazz world’s greats, including Charlie Byrd, Barney Kessel, Mel Torme, and Dizzy Gillespie. He’ll be joined by local music pros Gary Drysdale on guitar and Dylan Johnson on bass, as well as series co-producers Charlie and Sandi Shoemake on piano/vibraphone and vocals, respectively. You have your choice of two performances by Chuck Redd on Sunday, Sept. 9, at 4 p.m. and 7:15 p.m. ($15 for each show, or $20 for both; reservations at 927-0567.

Billy Foppiano writes to Glen from the funlivemusic.com headquarters, “Well, Meet the Foppers [guitar wizards Billy and Charlie Foppiano] are poised to play at Bon Temps Creole Café on Wednesday, Sept. 12, from 6:30 to 8:30 p.m., like we do every second and fourth Wednesday. We are always learning new and old tunes, to keep it fresh, and always with a big howdy to New Orleans-style music. This week we learned a couple of new tunes from New Orleans regular Jon Cleary. We make it a family affair, what with the father-and-son music playing—and more likely than not, we’ll see the owner Phil and his lovely wife, who come down on Wednesdays, regular-like, for the food and the fun.” Fun, indeed!

Contributing writer Kathy Johnston is sitting in for Glen Starkey while he’s on his honeymoon. Wish him well at gstarkey@newtimesslo.com.