Some two years after Gov. Jerry Brown declared a state of emergency and enforced mandatory water restrictions, the severity of the drought in California still hasn’t quite sunk in for some. And why would it? All that people know is the faucet still turns on. Luckily for the odd water ostrich who’s stuck their head in the proverbial sand, there’s someone who has been watching and documenting this phenomenon—her name is Brittany App.

App, a local photographer and activist based in Atascadero, is currently filming a solutions-focused documentary called Where There Once Was Water that will shed some light on the progressing issue of water scarcity in California. 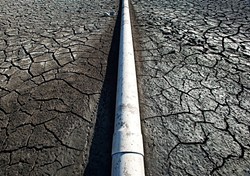 “The drought in California is just a piece of a much bigger problem,” App said. “We have to look a little deeper than just assuming we’re in a couple of dry years.”

App’s inspiration for environmental do-gooding began in 2008 when she spent a semester at sea and was shocked by the harsh realities she discovered along the way.

“I experienced Africa and India for the first time in these very poverty stricken areas,” App said. “I thought, ‘How is this possible in 2008 that little girls don’t get to go to school because they’re walking back and forth across the desert to fetch water?’ It broke my heart.”

After this epiphany, App was inspired to make a change, so she rode her bicycle from San Diego to St. Augustine, Fla., to raise $15,000 for WaterAid, an international nonprofit that provides clean water and sanitation to communities in Africa and Asia. In 2014, App responded to the ALS ice bucket challenge with a different challenge to only use 5 gallons of water for one day.

“A lot of the third world lives on 5 gallons a day,” App said. “Water is a sacred element. We cannot live without it.” 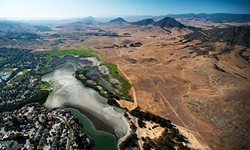 As the drought began to intensify on the Central Coast, App decided it was time to turn her lens into a call to action.

“In 2013, I reactivated that artist activist within myself,” App said. “Our lakes were drying up, and it seemed to me that no one was really talking about it or changing their behaviors. It didn’t seem right.”

Soon after, App set out to work on a photography project to document the West Coast’s dwindling water supply. After a year and a half of in-depth research and photographing barren lands, she became overwhelmed with her findings.

“The can of worms I had just opened was much larger than I had imagined,” App said. “The project transitioned out of necessity; I realized that this needed to be a film because it was far too complex to document with photographs alone.”

After six months of filming her first attempt at a feature-length documentary out of pocket, she knew she would have to crowd source to make her vision a reality. In February, she began an account on Kickstarter, an online funding platform.

App’s intentions stretch far beyond showing footage of dried-up lakes and climate change. She emphasized that the effects of food production are having a bigger impact on the water supply than many realize. Although App admits her response to how to reduce water consumption is an unpopular reality, she encourages that everyone should severely reduce or completely cut out daily meat consumption.

“I’m not on a vegan mission and I’m not making a vegan film, I’m making a film about water,” App said. “You can half your water foot print immediately by cutting out animal products.”

App also wants to uncover the benefits of raising cattle sustainably by visiting and filming a farm called the Savory Institute, which uses ancient methods of raising cattle. According to App, much of the sustainability in beef production lies in the soil, which is what she intends to expand her knowledge of.

App said that one of the most rewarding parts about making this documentary has been learning more through talking to a diverse range of experts on the subject.

“I love learning,” App said. “Through all of this, I am learning how to be a better steward of the land and of the water.”

Where There Once Was Water will feature a series of interviews to better understand different angles of our water crisis and the solutions that must be put in place to begin making an impact. App will continue to film throughout April of 2017 and will be releasing it into the 2018 film festival circuit.

“Plenty of people know about the drought, but do they know how to minimize their personal water footprint?” App said. “We need to become aware of how to each individually use less.”