SLO bikes are going missing; what's a cyclist to do? 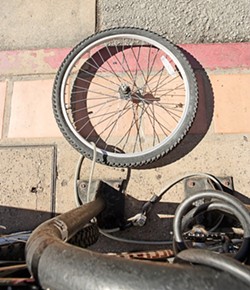 Under the sliver of a new moon on the last Thursday in January, a thief crept into a sleepy residential neighborhood just outside downtown SLO and up Mark Grayson’s driveway. Grayson, a known bike advocate and veritable Kris Kringle of bikes, was inside the house with friends—just a few feet from the open door where a pair of bikes leaned against a creeping star jasmine plant on the wall of his house. The thief rode up the drive on a cheap BMX bike and, abandoning it, took two custom-built, full-suspension mountain bikes and split.

Police arrived at Grayson’s house to take a report but didn’t fingerprint the deserted BMX bike, Grayson said. They left without offering much hope that the bikes would be returned.

“It’s so typical,” Grayson said, “The thing I found myself saying is the thing that people always say when their bike is stolen, ‘I just left it for a minute.’ We were just literally feet away from it.”

He’s right about it being typical, especially lately. The rides taken from Grayson’s house were among the 28 bike thefts that have been reported in San Luis since the beginning of the year. As of press time, that’s a bike reported stolen about every two days. And the figure tallies only the reported thefts in the city of SLO. Cal Poly records thefts separately: seven bikes had been stolen from campus this year as of press time, down from 16 this time last year.

It’s too early in the 2009 to make a good comparison with past years, but both SLO and Cal Poly saw a striking increase in reported thefts between 2007 and 2008. According to the SLO Police Department, there were 133 bikes reported stolen in 2007—amounting to a bike stolen every two or three days. The number jumped about 50 percent in 2008 to 198 stolen bikes, or a theft every 1.8 days.

It’s even worse on campus. Thefts on Cal Poly’s campus more than doubled between 2007 and 2008, according to Fred Mills of Cal Poly Police, jumping from 54 stolen bikes to 113. The collective value of those 167 bikes is estimated at more than $73,000. Mills warned that the number of thefts tends to fluctuate greatly from year to year and that with more dorms, Cal Poly has more bikes on campus. He also said Cal Poly is able to recover several bikes each year with a bike registration program. Still, 113 is a high number.

Anecdotal reports point to yet another spike. A spate of stolen bike ads have recently appeared on local craigslist sites. The posts share a common theme: The posters just want their bikes back. Some offer money as a reward, while others hope out loud that the thieves break their faces while riding their ill-gotten wheels. Even Lance Armstrong was stung. He lost his $10,000 time trial bike during a Tour of California stop in Sacramento. Lance, after garnering national attention, was able to get his bike returned.

“People get an attachment [to their bikes] that is beyond just a piece of metal,” Grayson explained.

Lieutenant Bill Proll with the SLO Police Department didn’t have an explanation for the increase, but said thefts often come in waves, perhaps perpetrated by roving gangs of thieves, who then move to another college town and sell the stolen goods. It might sound far-fetched, but Mills had a similar theory. Mills said there are spikes in the number of thefts that occur “Not by day or week,” he said, “but by month or quarter. Periodically, we’ve had groups come through and steal bikes … Usually it’s the ones that don’t have good locks.”

Bike experts say the best way to protect against bike theft is to buy a good lock, and use it. It’s also important to have the serial number of your bike and photos of it. Many people even put business cards or notes down the seat stem to prove ownership if they find the bike.

Grayson has another idea to combat thefts in SLO.  He’s installing a tracking device in a “decoy bike,” he said, and plans to find would-be bike thieves on his own.

Kylie Mendonca rides an ugly bike. You wouldn’t want it. Contact her at kmendonca@newtimesslo.com.