Dulcie Taylor releases more from the vault with the EP Rediscovered

Dulcie Taylor was just 10 when her mother gave her a guitar for Christmas, leading to a lifelong journey of singing and songwriting. The award-winning performer has been a MesaBluemoon Records recording artist since 2002 with the release of Diamond & Glass, which quickly became a favorite of Triple A radio. Her follow up, Mirrors and Windows, was included on Soundstage's Best Recordings of the Year along with artists such as Brian Wilson and Wilco.

Though she continues to record stunning new material, like 2018's Better Part of Me, in the last year or so she's begun to look back at some of these earlier songs on two EPs.

"We're calling this new record Rediscovered, and similar to my previous release Reimagined, this six-song EP is another collection of some of my earlier songs that we have remixed and remastered," Taylor explained. "We even rerecorded some too, all in an effort to incorporate new ideas into these older tracks, and take them in a direction we didn't get to the first time around. This process has been akin to time travel—when we'd bring up a track, some of them nearly 20 years old, it put me right back in the studio where the song was cut with the musicians who played on it, and that was a really special feeling. I have so loved going through this process of revisiting and reworking my material for this new release, and I hope all that love shines through in the new versions of these songs."

Both the previously released Reimagined and the soon-to-be-released Rediscovered are filled with magical tracks featuring Taylor's deeply affecting vocals and right-to-the heart lyrics.

Check it out at mesabluemoon.com.

SLO Brew Rock brings The Higgs to the brewery for a two-night run this Friday, March 12, and Saturday, March 13, from 6 to 9 p.m.

"We are absolutely thrilled to announce a special two-night engagement with national touring jam band The Higgs!" organizers announced. "The Higgs blur musical boundaries and find a unification of many different genres like jazz, rock, prog, reggae, and blues."

Singer-songwriter Steve Key will swap songs with Minnesotan Tim Styles on Saturday, March 13, on the Sculpterra Winery garden stage from 12:30 to 3:30 p.m. Also on the bill is Bakersfield duo The Charlie Zanne Band. Expect plenty of folk and Americana tunes.

You can also catch singer-songwriter and Moonshiner Collective frontman Dan Curcio at SLO Brew Rock this Sunday, March 14, at 2 p.m., playing in the beer garden with percussionist Ryan House. This one's going to feel like a backyard concert with friends.

Cal Poly has a trio of virtual concerts this week showcasing the talents of their students. The first features The Cal Poly Symphony and its annual Soloist Showcase at 7:30 p.m. on Friday, March 12. 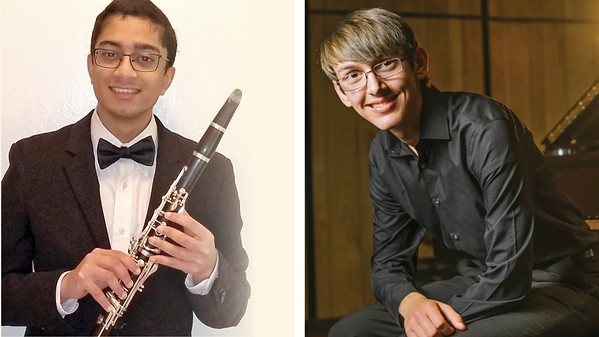 After November auditions for student soloists, the winners were computer engineering major Kiran Manikonda on clarinet and Grant Smith, a double major in civil engineering and music, on piano. Manikonda will play Gioachino Rossini's "Introduction, Theme and Variations," and Smith will perform the first movement from Ludwig van Beethoven's Piano Concerto No. 3 in C Minor. The winds and brass of the orchestra will also play some selections.

Practice for the show has been a mix of in-person string practice inside and in-person brass and wind practice outdoors, as well as other players joining in remotely from home. Music professor and conductor David Arrivée, the soloists, and other students will engage in a Q-and-A after the performance. Tickets are $5. Call (805) 756-4849 between 9 a.m. and 5 p.m. Monday through Friday or visit pacslo.org.

The Cal Poly Choirs will share their first "semi-live" music in more than a year this Saturday, March 13, at 7:30 p.m. Titled Breathe in Hope, it will feature a variety of selections.

"We had a successful social-distanced, masked recording session, and it turned out beautifully," according to the choirs. "We will share the results in an hour-long virtual concert filled with poetry readings and beautiful music."

Finally, The Cal Poly Wind Bands concert, Community, which was originally scheduled for March 6, will now take place this Sunday, March 14, at 3 p.m.

"Music has the ability to bring together minds and souls," Director of Bands Christopher J. Woodruff said. "For this concert, the members of the Cal Poly Wind Bands explore the connections between individuals that make us part of a larger whole, whether they are performing in person or remotely."

Get inside Jim White on The Rock

Southern singer-songwriter Jim White is a national treasure. He was raised on gospel music in Pensacola, Florida. He's best known as the man behind albums such as Wrong-Eyed Jesus (The Mysterious Tale of How I Shouted) (1997), Drill a Hole in That Substrate and Tell Me What You See (2004), Transnormal Skiperoo (2007), and most recently Misfit's Jubilee (2020).

Rock DJ Jacob Campbell conducted an in-depth three-hour interview with White just days ago that will be exclusively broadcast on local community radio The Rock, 97.3/107.9 FM, KEBF-KZSR on Tuesday, March 16, from 7 to 10 p.m.

"Jim has no problem at all reeling off the most amazing stories you can imagine," Campbell said.

White was also the narrator and de facto tour guide for the award-winning BBC documentary Searching for the Wrong Eyed Jesus, a road movie set in the rural South that the LA Times described as "decidedly strange, delightfully demented."

During his interview on The Rock, "White reveals that prior to becoming a musician, he led an aimless, diverse life working countless menial jobs: dishwasher, cook, lifeguard, surfboard laminator, culminating with 13 years driving a cab in New York City," Campbell added. "White was a pro surfer, has been a literary commentator for the National Endowment of the Arts, and was a European fashion model. Samuel Beckett once played a practical joke on him—all revealed during this exclusive interview."